Worth It? Concerning WCC Free Popcorn 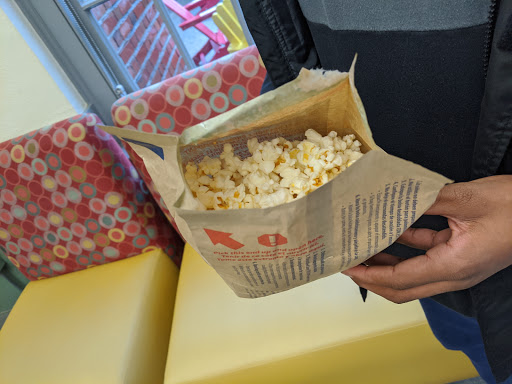 It is 3:20 p.m. I half walk, half run toward the WCC, hoping for enough time to grab a pack of microwavable popcorn to eat on the bus, and perhaps even use it as leverage in the crude economic system of bartering at the bus stop. By the time I arrive at the door I’m running, heavy backpack swinging as I turn to maneuver my way through the archway. I sigh, half in relief, half in defeat as I realize that all the popcorn is gone; 20-some packs, gone in a few hours. And thus is the demand for perhaps the greatest bounty in all Lakeside; free microwavable popcorn.

I decided to contact an expert on this subject: Mr. Porter, PE teacher.

One of the main criticisms that exist for microwavable popcorn in general, not just in school, is of course the unhealthiness.

“First off I will say that not all microwavable popcorn is created equal. Certainly… there [are] chemicals lining the bags of the microwavable popcorn that has a bunch of nasty things in them.” said Mr. Porter about his general opinion. After all, what’s to be expected from a bag of salt, “butter” and corn that can be turned into a delectable treat after a few minutes in the radiation machine? Chemicals and capitalism, that’s what.

Of course, it goes both ways, and to my surprise the microwavable popcorn we have in stock is relatively healthy. “From what I understand about the Costco brand is those chemicals are not in the bag, so it is a more natural product, and as is the case with Ms. Zinda, she always gets the good stuff. And so I think as far as microwavable popcorn goes, the brand that we have in the WCC is quite good.” said Mr. Porter. I guess that does alleviate my suspicions a bit. Plus, it is always reassuring to hear, for once, that the junk food you’ve been having for a while is not as bad as you think it is.

Well, the stance on popcorn seems pretty clean-cut. But, “obviously that’s an individual question, each individual has to analyze what their needs are from food and as I said, I truly believe there is an aspect of nutrition where we have to have those vices, that make us feel happy…” Mr. Porter said. As for me, I’m not going to stop eating microwavable popcorn. As much of a mess it can make, and how quickly it runs out, microwavable popcorn is worth it. Yeah, I’m willing to burn through a couple hundred calories and higher-than-safe sodium content if it’s to share a bag of chemicals and capitalism with your friend(s). Of course, I’m not going to relive that experience described up there. Moderation is the key, so my advice is to utilize middle school-level math and spread it out over a large group of people.