Out With the Old, In With the New: A Look into McKay’s New Look 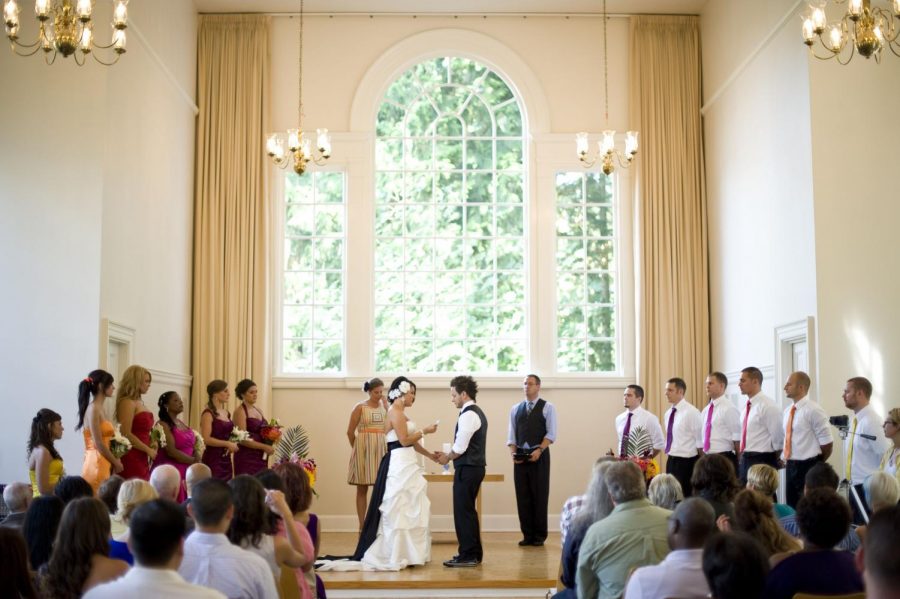 Wedding taking place in McKay Chapel this summer after renovations were completed!(Sophia Tolentino)

Amid the chaos of the end of the year, from spring sports to finals season, the inside of McKay Chapel, like the students, was in a flurry of work. Carpet was pulled, the old Beauty and the Beast-esque chandeliers were being lowered, and, well, it was a construction zone. The seasoned building was finally getting a renovation: a well-deserved one after 67 years. Used as a daily musical rehearsal area, meeting-center, and even a wedding venue, the Chapel has been an integral part of Lakeside’s community and history. Where else would the advanced drama classes practice their sword fighting skills? Therefore, it was crucial that it was up-to-date for the years to come, including for the three weddings that were scheduled in August of 2019.

Albeit a surprise to many students returning from summer break, the renovation has been long in the works. A team effort comprised of different departments and staff have led to this long-lasting improvement on the Lakeside campus. The renovation of the Chapel was the third and last part of the Performance Arts Initiative, also known as PAI, that had been approved by the Board of Trustees and Head of School, in combination with a variety of student and faculty input, in 2016. This project began with a one to two year planning period alone, then the following two years to execute. Starting with a renovation of the Middle School’s Arts Wing and continuing on to the St. Nicks Performance Center, the PAI was adopted to update the spaces of both campuses to meet the new demands of the growing performing arts programs at Lakeside.

These renovations were not free, however. Birage Tandon, the school’s Chief Financial Officer, claimed that the total PAI project cost roughly $4.6 million in total. The Chapel’s renovation itself was estimated to be roughly $900,000. Although the Chapel was slightly over-budget, the overall total was less than initially projected because of supplemental anonymous donor funds.

Mr. Krus, the Director of Visual and Performing Arts and Project Manager of the PAI, states that the top considerations and improvements included ensuring that the facilities were safe and in the best possible condition for teaching; this included acoustics, which many Symphony Orchestra students can attest to. Mr. Krus compared performing music in the former Chapel to “painting in a room with no lights.” Now, though, music teachers and students alike will be able to make considerable progress with the change in the acoustics of the room. Upon walking into the chapel during the 6th period orchestra rehearsal, one can’t help but stand there and listen to the orchestra perform. Also, with the new and improved audio-visual upgrades, listening to both musical recordings and the metronome, a necessity in rehearsals, will prove a lot easier. From new music-enhancing paneling to wood floors, these changes will have a wonderful impact on music education at Lakeside.

Additional improvements, according to Dan Dawkins, Director of Facilities, included new lights, heating systems and flooring, and basic building maintenance. The new drapery will even be automatic. The stage in the Chapel is also getting its due attention. With its updated front lights and new features, performances, recitals, wedding ceremonies, and other events will take center stage. Despite some delays, including late shipments, flooring issues, and even wet paint, the Chapel was ready for use by the time school rolled around, and more importantly, for the three weddings in August.