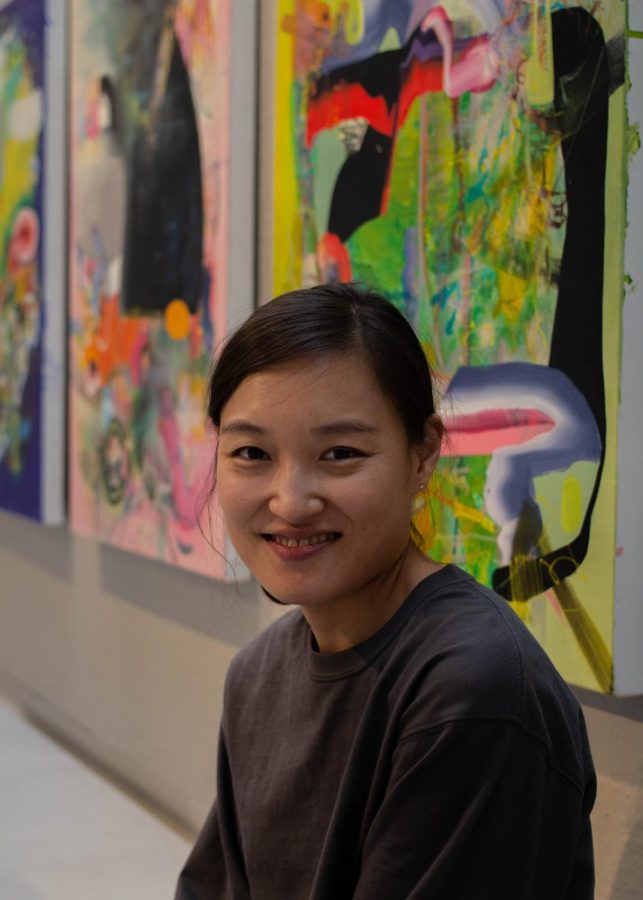 Not everyone spends every free period they have in Pigott. Some people don’t even go in there at all. So for some of you, visual artist Soo Hong’s “Rain Village” exhibition wasn’t on your radar. Opening November 21st, “Rain Village” was an installation in the gallery space of Pigott featuring paintings, 3D printed ceramics and a 96 foot long mural. While Soo had the vision, the final product was a collaboration between her and each Lakeside student that took part.

Our first opportunity to participate came three days into the installation. Soo had sketched a map of Seattle onto the blank mural wall, and filled the empty spaces with raindrops. Soo gave  only the instruction to draw rings around each raindrop until the whole mural was filled, then when all 96 feet had been covered, she gave us silver pens to outline our drawing. It was clear from the beginning that this was our piece – the student’s as much as Soo’s. I can’t imagine putting that much work into a piece, and then trusting a bunch of kids to make it look good. But that’s what Soo did.

For the first two weeks of the exhibition, Lakeside art teacher Jacob Foran – the person responsible for bringing Soo to Lakeside – was hard at work urging everyone to draw a raindrop on A4 paper. Each drawing was then collected and 3D printed into a large porcelain raindrop to be incorporated into the piece. At the time of writing, the plan is for each raindrop to be lined up in front of the mural, with a long mirror placed behind it. To fill the rest of the gallery, Soo’s in the process of hanging up her vibrant abstract paintings along the walls.

The key to understanding Soo’s piece is the concept of cultural belonging. Soo has lived in so many places that for her, no one place merits the title of home, so in a sense, she carries her home with her. When I went to chat with her about the piece, I had the intention to read off my list of questions. But quickly we went off-script as Soo led me though her life – born in Korea; raised in America, England, Italy and then Korea again. Even as an adult, she’s had to move across the world to places she doesn’t belong in. I found myself nodding along to parts of her story. As someone else born in one place and raised in another, what she’s getting at with “Rain Village” makes sense to me. As an immigrant to a country, your identity never belongs to one place. Although I call Seattle home, I doubt I’ll ever feel completely American.

Soo felt the same way. During her childhood, keeping up with the different languages spoken in her schools was especially hard: “I always read the body language, look at the face expressions. I have to catch up – if everyone’s standing up I have to stand up. If people go there I just need to go there. And that has been my life.” Even after moving back to Korea in second grade, Soo felt like an alien. “And then elementary, middle, high school, my brothers said I didn’t look happy,” she shared, “But art was the only thing I could do where I didn’t have to talk, it’s just visual. It was a comfort zone for me.” After going to art college, Soo explored a range of different art mediums, eventually settling on abstract. A few years later, she’s now a one year resident of Seattle with her husband and daughter.

That’s why “Rain Village” is perfect for Lakeside. Few schools in Seattle are home to such a range of identities, and to so many people that can relate to Soo’s concept. For everyone at Lakeside who’s an immigrant, or the child of an immigrant, or who doesn’t totally identify as American, “Rain Village” is for them. Like Soo, we understand that home isn’t tied to one place, and that it is what you make of it. 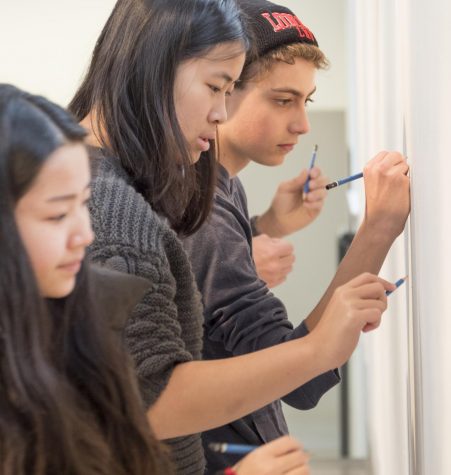 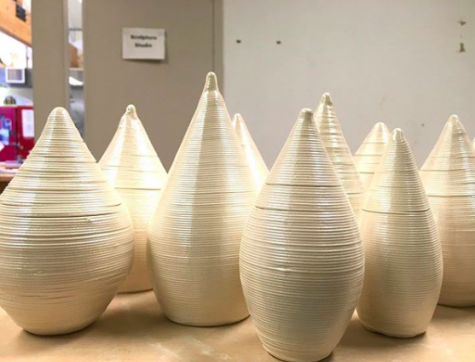