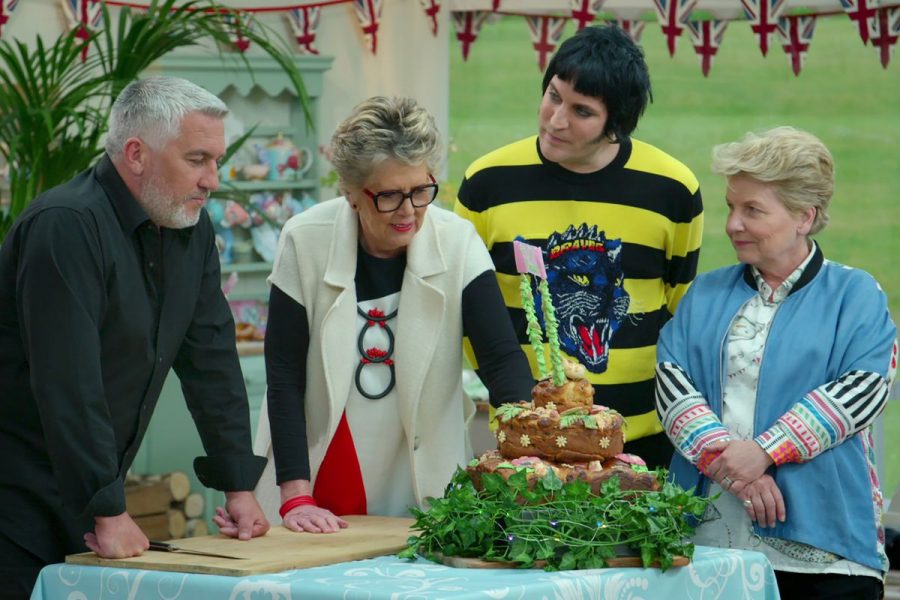 Each year, in a tent far away from Lakeside’s campus, thirteen of Britain’s best amateur bakers compete in the Great British Bake Off or GBBO (Great British Baking Show in the US due to copyright reasons), delighting fans with their friendly personalities and hilarious innuendos. The show is a popular topic in discussion and a common occurrence at girl’s crew team sleepovers, so it isn’t a stretch to say that a disproportionate number of Lakesiders consider themselves fans. In fact, 52.8% of poll respondents said that they watched the show. What about this show has caught the attention of Lakeside students in particular?

In a major break from United States cooking shows, everyone is extraordinarily nice to each other on GBBO. On Chopped, Masterchef, and the like, the judges are hardcore and the contestants will stop at nothing to be the best. On Bake Off, contestants help each other when they have extra time and hold hands while the elimination gets announced. Even Paul Hollywood, the Bake Off judge often considered to be unnecessarily cruel to the contestants, is less harsh than some judges of American cooking shows (cough cough Bobby Flay). Comparing the two, it’s easy to see which one is less stress-inducing. The pastoral and pleasant setting of Bake Off might be inviting to Lakesiders, who face constant academic and personal stress throughout the year.

“I really like how they all help each other,” said Mia V. ’21. Speaking of the latest season, she said, “I have a favorite moment: when all the contestants wore ties after Henry left.” The camaraderie of the bakers is refreshing: they’re all so friendly to each other, even though they’re supposed to be competitors. It’s very adorable to watch. “Although it’s a competition, there isn’t really any drama or ill will between the contestants; instead, they’re all friends and it’s really uplifting to see them support and help each other,” said Sophia D. ’21. The sheer cuteness of the friendships is more than enough to make people want to watch.

Not only is the way contestants treat each other amazing, so are the baked goods they make. When the baking goes well, the results look absolutely amazing. Watching the show is a mouth-watering experience. “It feels good to eat while I’m watching it,” said Mia. Despite what Prue and Paul might say about how edible some of the desserts are, I’d still eat almost everything they made on the show. GBBO also inspires a desire to bake: “Each episode feels very relaxing and soothing while simultaneously filling me with a frantic energy to go bake something!” said Sophia. There’s just something about watching the show makes you want to head into the kitchen and spend your weekend making a massive croquembouche. Even though the latest season just ended, I know I and many others are looking forward to the next one.