Like all good fast-food megachains, Chick-Fil-A has been expanding its reach into the Pacific Northwest. The chain, which originated in Georgia in 1946, is well-known for values influenced by its founder, the Southern Baptist Truett S. Cathy. These values include closing the restaurants on Sundays and various donations to Christian groups through its philanthropic arm, The WinShape Foundation. However, several of the groups Chick-Fil-A donates to publicly oppose same-sex marriage, and one, Exodus International, publicly supports conversion therapy. In addition, the CEO of Chick-Fil-A, Dan T. Cathy, has made statements saying that he opposes same-sex marriage and that “we are inviting God’s judgement… to think that we have the audacity to define what a marriage is about.” While the chain claimed in 2012 it had stopped contributing to such organizations, it has been reported that donations to anti-LGBT organizations have continued as recently as 2015.

In Washington, new Chick-Fil-As have been popping up at an astonishing rate. One Washington location in 2014 has since grown to fourteen in 2019; one of these is on the intersection of Aurora Avenue and 130th Street, a less than five minute drive from Lakeside’s campus. Since its presence in Seattle has grown larger, it’s hard to not notice the increase in Chick-Fil-A bags on campus and social media. Given Lakeside’s general support of the LGBTQ community through pride night, GLOW, and special assemblies, I wondered how the student body felt about the morality of eating there.

It can be argued that a person’s choice as a consumer doesn’t reflect how they feel about the actions of a company. They are merely consuming the product, not the company values that come with it. But if this were wholly the case, boycotts would not exist. It is clear that for a good number of people, the values of a company affect their decision to buy from or engage with them. Especially with a model of profit donation like the one Chick-Fil-A uses, consumer dollars directly fund the organizations Chick-Fil-A donates to. For those especially concerned with furthering LGBTQ protections and rights, purposefully not eating at Chick-Fil-A is a way to put their money where their mouth is.

Nathin W. ’21 took a different stance: “The chicken is too good to pass up,” he said. “The sauce is really good and the chicken nuggets are nice, so I’m not going to stop eating there in exchange for a political statement.” This outlook, that disagreement with what the company is doing doesn’t outweigh the quality of its product, is another popular stance concerning the morality of eating at Chick-Fil-A. Within this viewpoint, there are those who simply think the food is good, and there are those who feel apologetic about eating there, or as if its a guilty pleasure. An anonymous student I talked to rejected the excuse of it being a guilty pleasure.

“If you’re gonna do it, fine. Do it. Own it,” said the student. “It’s not your ‘guilty pleasure’ to your otherwise spotless record. You are aware of the problem (at least you are now) but that doesn’t necessarily mean change. That’s up to you. It’s impossible to live a morally perfect life especially with such an increased awareness of global contexts and issues. Consumer transactions are choices and this is one of yours.” With accessibility to information comes heightened awareness of a company’s goings-on. Unfortunately, the behind the scenes action of a company isn’t as positive as its marketing or products might suggest. Countless corporations exploit their workers, use sweatshop labor, or donate to controversial organizations. As ethical consumption gets harder and harder, it is up to consumers to decide whether a corporation’s ethicality is an important factor in regards to their buying choices.

Despite the general discontent with its practices, Chick-Fil-A continues to thrive. Maybe it’s the swaths of homophobes who intentionally eat there to own the libs, but it’s probably just that they just make really good chicken. I wouldn’t really know either way. 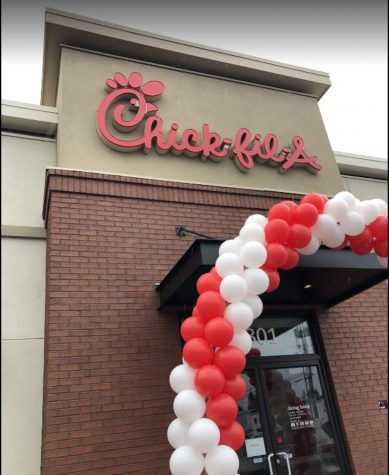