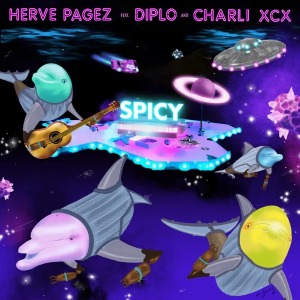 Who knew the Top 40 Hits were the sound of capitalist brainwashing? The same four inane, auto-tune-heavy, electronic cash grab pop songs dominated the background of much of my work experience, so you can imagine my surprise when a new sound graced the Jamba Juice playlist. At first, I was comforted by the familiar: undoubtedly, this song was “Wannabe” by the Spice Girls, an acclaimed pop phenomenon. I could live with that.

Oh, how very, very wrong I was.

The beat seemed a little different, so I figured it must be a cover. I wasn’t entirely wrong. Maybe there actually was an EDM-style beat drop in the original recording, but the chances that I’d forgotten what such an iconic Spice Girls bop sounded like were very low.

After that fateful shift, I was haunted; I went searching for answers. I was not happy with what I found. Rolling Stone describes the beat: “the buoyant pop song replaces the signature chorus with a synth remix that swaps out vocals for distorted sounds, giving the track a dance-heavy reinterpretation.” While accurate, this description does not capture the visceral response that the single triggered within my lizard brain. I wouldn’t so much call Spicy (yes, that’s its name) a “rework” of the 1996 hit, but rather a monstrous, bastardized mutilation of the tune.  Diplo and Herve Pagez have created what can only be described as a mangled distortion, nay, an insulting and grotesque assortment of noise. And yes, there was a music video. In it was not only Charli XCX’s audition tape to play Aquaman, but some of the worst CGI this side of 2002. Dolphins feature prominently in the two-minute masterpiece, as well as a diner with robot waitresses and checkered floors. As a casual listener to the Spice Girls recording, the origin of the intergalactic, radioactive, underwater, sexy fish tanks in this video is a complete mystery to me.

But why? Why does this atrocity exist? According to The Fader, Charli explained, saying, “[I] looked up to the pop gods & they said ‘Charli – you’re the chosen one: honor the spice girls’ return with a mind-blowing version of one of their iconic smash hits,’ & I said ‘k no probs hun I got this,’ so I called @diplo & @hervepagez & SPICY was born.” I would like a word with the pop gods about this decision.

I am aware that remixing and reimagining songs is not an uncommon occurrence. Electronic music has never been my jam, but I appreciate it as an expressive and artistic medium. What really got me about Spicy wasn’t its genre, but the lack of originality and authenticity. The world of synthetic music is full of unexplored possibilities, and it is frustrating to imagine such potential is being redirected toward rehashing fan favorites. I’d like to believe Charli XCX and her story of divine inspiration, but in my cynical reality, this single was not made for artistic merit or cultural gain of any sort. Rather than angels well-versed in classic 90s pop, it’s far more likely that the motivation for the single was a little more boring and a lot more green.

My problem with the work isn’t so much the grating sound or over-the-top visual effects, but how indicative it is of the lack of popular original content. In a world oversaturated with repetition—like the songs playing on the radio at Jamba Juice—it is easy to declare “original content” a relic of the past. The mere existence of Spicy and its brand of music seemingly ensure the demise of art. This saddens me, but, in the meantime, this god awful abomination is somewhat harmless and silly. You know, until it isn’t.