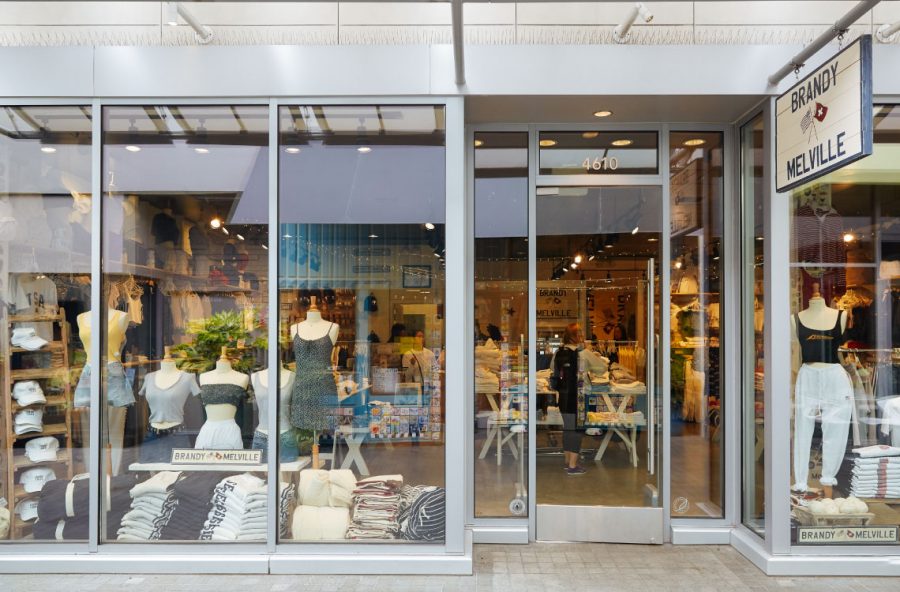 I’m ashamed to say that I’ve spent a fair amount of time on the Brandy Melville website. Most of it was looking for gifts for friends or family, but still. I own one piece of their clothing – a yellow sweatshirt that came as a gift from my sister – and on the few occasions I’ve been asked where it’s from, I rolled my eyes as I admitted it was Brandy Melville. Why this embarrassment, when Brandy Melville is about as on-trend as it gets?

When Italians Silvio and Stephen Marsan founded the company in 1970, I doubt they knew what would happen. In 2009, the first Brandy Melville retail store was set up in Los Angeles. A decade later, there are 95 stores in the US, Europe, and Asia. The expansion was relatively low-key, but in just a few years, Brandy Melville has begun to dominate the teen clothing market.

From what I can tell, for every person that loves Brandy Melville, there’s someone out there that hates it just as much. At the center of this controversy lies the “One Size Fits All” marketing that Brandy Melville is known for, and a question of diversity. A quick browse through their website shows that almost everything is labeled “Fits Size X-Small/Small”, bar a few pairs of jeans that come in Mediums and the “Oversized” section.

I know nothing about marketing or production, but from a business point of view, selling just one size seems innovative. Yes, it cuts down the size of the consumer base, but especially for a newly expanding retailer, it simplifies the production process hugely.

But from a diversity perspective? Brandy Melville’s target market is clear – teenage girls with money to spend and an interest in fashion. That’s not all – virtually all of the models on the website are white, long-legged, and skinny. Each girl is gorgeous in her own right, but all together, the Brandy Melville website sends an overwhelmingly clear message. For an age group that’s characterized by self-consciousness and a desire to fit in, showing only one body type is dangerous. I spoke to a few girls my age, and each one said that they don’t always fit into Brandy Melville’s one size that’s supposed to “Fit All”.

Brandy Melville does have a few items of medium or large sized clothing, but under the title “Oversized”. If someone who isn’t “X-Small/Small” wants to shop at Brandy Melville, their only option is to shop under a word that implies they’re bigger than they should be. It’s impossible to ignore how harmful is.

It begins with giving teenage girls a break. When we already have so much to deal with – growing up, getting good grades, making friends – who can blame us for wanting an easy way to stay relevant and on-trend? And while it is a vicious circle, don’t look down on us for trying to fit in. As one friend of mine put it, “I feel like when I wear [Brandy Melville] people are like, ‘Oh, she’s so white, she’s so basic.’” Another said that she’s always conscious of when she wears Brandy Melville because if someone else is wearing something similar, she’ll be labelled, once again, as basic. The impact Brandy Melville has on body image is clearly horrendous, but the backlash against their customers isn’t entirely without consequence either. I think I’m speaking for a lot of people when I say that sometimes I feel stuck between wearing clothes that I like or supporting body positivity and individuality. So instead, let’s redirect our judgement to the people behind the “One Size Fits All” production and the almost entirely white models. If we want a future free of harmful body standards, we have to start by supporting all girls in whatever they choose to wear.