Greener Together: A Profile of Teens in Sustainability 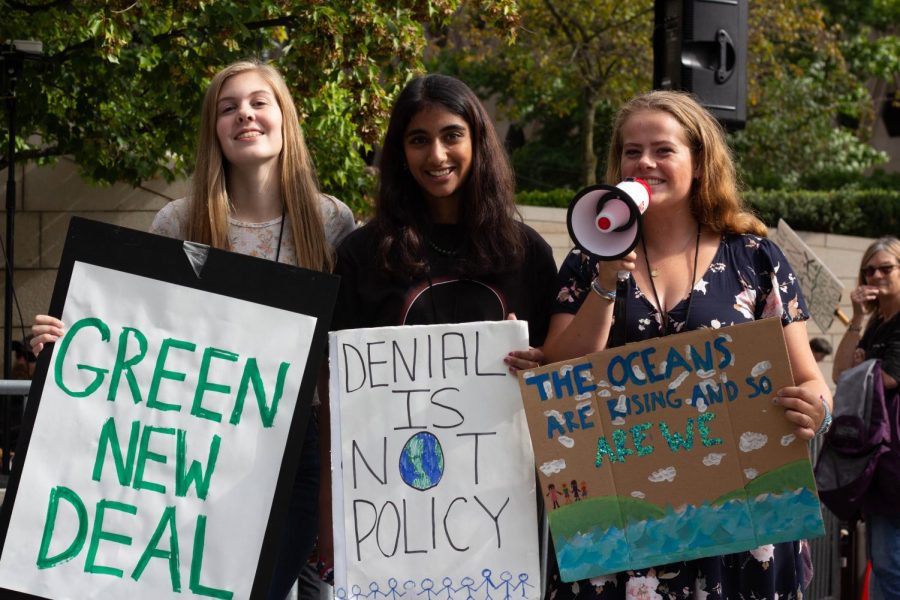 For all the criticism Gen-Z gets, that we’re too anti-social and hopelessly screen-obsessed, there’s one thing that no one can deny about the nature of today’s youth: we take action. All that time on our phones isn’t just spent gossiping about celebs or sharing the latest memes (although there is plenty of that, too); instead, we’ve put our infinite access to information and global interconnectivity to use, organizing activist movements from Youth Climate Strike to the Sunrise Movement. But there’s more to activism than just reposting articles about elephants or the Amazon rainforest fires or metal straws. To make real change, you have to get involved. And no one is more passionate and engaged in these issues than Lakeside’s resident environmental activist and Creative Director for Climate Strike WA, Liv S. ’20.

The first thing I knew I had to ask Liv S. was how she had initially gotten involved in the green movement. She told me that her passion for sustainability blossomed during the summer before sophomore year, when she started volunteering at the aquarium. From there, her enthusiasm for marine conservation expanded when she discovered the environmental movement and wanted to be involved. The first step? Attending the climate strike. Even though she wasn’t yet a member, she spoke in front of the crowd and ended up officially joining the organization soon after.

While almost everyone is aware of the pressing environmental issues at hand, it can often feel daunting to figure out how to start making change yourself. Liv S.’s advice? “Find an issue you’re passionate about. For some people, it might be sharks or plastic pollution, for others, it could be the sea level rising.” From there, social media is a key tool to use when it comes to activism. Starting an account focusing on your issue of choice, for example, can be a great way to spread information about the topic and get others engaged.

During our conversation, another key activist in the Lakeside community, Fiona M. ’21, the Politics Director of Climate Strike WA, joined us and highlighted the ways social media can be used most effectively to spark change. She argued that “using your social media platform to promote physical actions that people can do is a lot more effective than just providing information.” In the age of “Instagram activism,” where it’s seen as cool to seem involved by “spreading awareness” and reposting the same facts over an over, the information overflow can render the message useless. “That kind of thing isn’t necessarily bad,” Fiona M. told me, “but if you really want to make change, you have to provide opportunities for people to get educated and get involved.”

When it comes to local activism, Liv S. and Fiona M. explained, there are plenty of organizations right here in Seattle that need your help. The main one both of them work for is Climate Strike WA, a branch of the national Youth Climate Strike. The name is fairly self-explanatory; they host climate strikes for teens all over the country. Just last week, for example, Liv S. helped organize a sign-making party for teens in preparation for the strike on September 20th. The strike itself ended up being a huge success, with over 10,000 in attendance! Another group specifically involved in legislative change for those living on the East side is the Kirkland PCA (People for Climate Action), of which Fiona M. is a member. Their main focus is on presenting information to city hall about policy-making plans and political actions that can be taken to achieve a more sustainable future. One more organization for teens is Sustainability Ambassadors, a group that hosts workshops for teens about sustainability and speaks in front of school boards and the city hall about real changes that can be made to promote green living.

If you want to get involved in any of these organizations or are interested in being a member of Lakeside’s newest club, the Green Team (run by Fiona M.), you can contact Liv S. or Fiona M. at olivias20@lakesideschool.org and fionam21@lakesideschool.org.  And although at times, after reading countless pessimistic articles about the future of humanity on everyone’s Insta stories, it can feel like your actions as an individual are too insignificant to make a difference, it’s important to remember that change starts small. It’s just like Liv S. told me: “Every person can and should be taking action and encouraging others to do the same.”