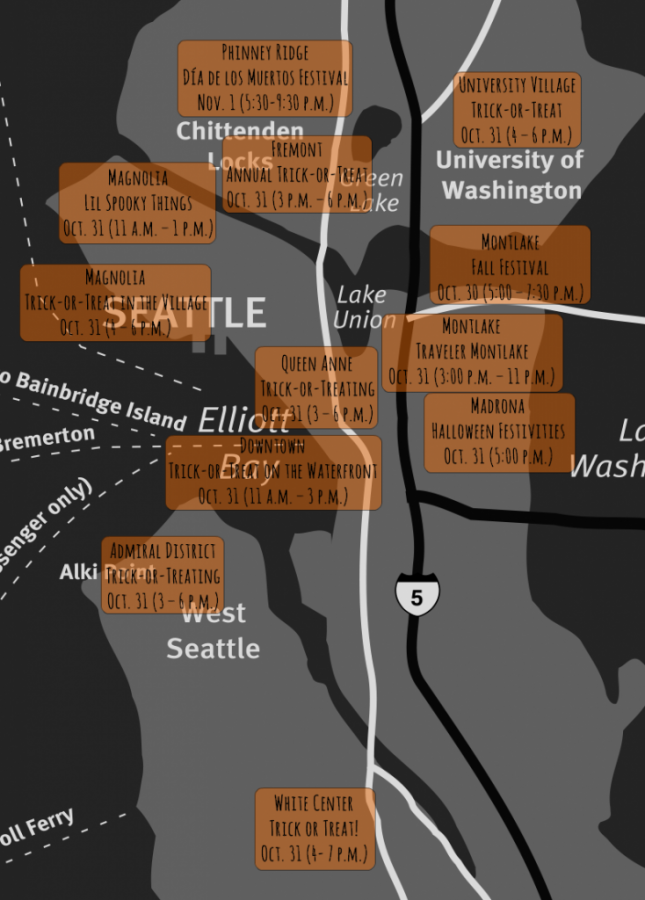 Over 2000 years ago, the Ancient Celts would dress up, light fires, and dance about in costumes to keep the gate between the land of the dead and living closed. To the Celts, this sacred festival was known as Samhain, but over time their tradition evolved into what we now call “Holloween.” One aspect of the original tradition that still remains today is costumed kids playing in the night, but instead of worshiping the dead, it is candy that is revered. All that matters now is how many sweets you can stuff inside your paper sack. That being said, this article is meant to assist you in your candy crusade, highlighting some of the best locations for trick-or-treating in the Seattle area.

As we know, Lakeside has students from all over the Seattle area, from as far north as Mukilteo, all the way down to Seatac, and almost everywhere in between. That gives us a wide range of sweet-scouting locations to choose from. According to the Tatler Poll, it seems Lakeside students have found the most successful trick-or-treating encounters in “rich neighborhoods,” specifically Queen Ann. Queen Ann also hosts an annual trick-or-treat festival put on by the Upper Queen Anne Merchants Association. There, you can celebrate just like the Ancient Celts did during Halloweens of the past. Locations near huge tech companies were also said to have yielded high bounties of candy by Lakeside students. This includes South Lake Union, home of Amazon headquarters, and Microsoft headquarters in Redmond. Magnolia, Northgate Mall, and Edmonds all have fun and spooky events on the 31st, ranging from costume parties to all sorts of games and activities.

Personally, my go-to spot for sweets-searching is Capitol Hill. I remember in past years looking down the Capitol Hill streets and seeing the whole block lit up with elaborate Halloween decorations. The sinister cackling of goblins and ghouls echoed off and out of house after house, venting eventually into the pitch dark. The terror I used to feel was unimaginable, as I made my way up the long staircases adorned with skulls and jack-o’-lanterns. I’d walk all the way up to the door, knowing it would all be worth it — and boy, was it. With one simple phrase, easily committed to heart, I could fulfill all of my candy-fueled cravings. Hershey Bars, Big Hunks, Charleston Chews, etc., nothing smaller than a Kit Kat bar. I would haul my loot back home, satisfied with the night’s bounty, and peacefully slip into a sugar coma.

With this knowledge, you hopefully have a wide variety of locations you can hit up to satisfy that confectionary filled desires. Now, grab your pillowcases, pray to The Great Pumpkin, and remember to avoid the houses giving away rocks.