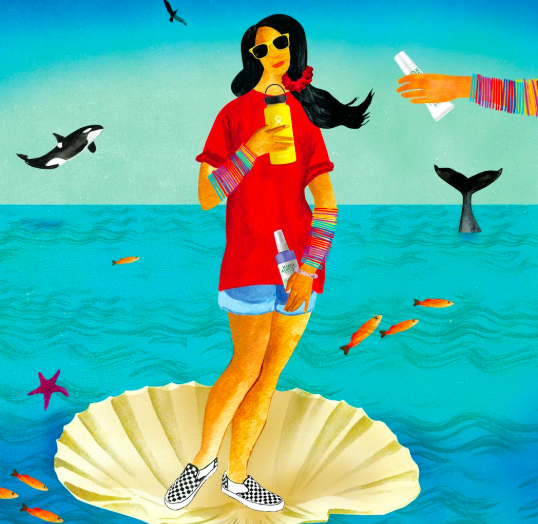 Drawing of a 'VSCO girl', a stereotype popularized by TikTok (New York Times)

This summer, propelled by teenage boredom and hours spent on TikTok, a new brand of teen girl stereotype emerged: The VSCO Girl. She dresses like I do in the summer when I know I won’t leave the house: in running shorts and an oversized tee. Her hair is pulled into a messy bun, she has scrunchies on her wrist, and she carries a Hydro Flask adorned with stickers and halfway finished friendship bracelets. Her catchphrases are “and I oop-” and “save the turtles!”, and she is endlessly ridiculed on social media. While most of the people who make fun of them are VSCO girls themselves and are usually joking in a self-deprecating way, the taunting of this stereotype is just the latest iteration of a tried phenomenon: the various interests of teenage girls consolidated into a single image that then becomes the subject matter of a host of internet jokes and memes.

There have been plenty of examples of these kinds of teen girl personality stereotypes: the E-Girl, the Alt Girl, the Basic White Girl, the Horse Girl, etc. They’re all mostly unseen in real life, yet each of them has a clear online aesthetic. It can seem fruitless to say that they shouldn’t be made fun of when they don’t really exist, but aspects of each aesthetic are present everywhere. The widespread use of products and styles featured in these images means that anyone anywhere might be made fun of for using them, making it all the more important to not ridicule anyone who participates in some arbitrary trend.

I have to admit that making fun of mostly harmless stereotypes can be fun, especially if you’re part of the stereotyped group (this isn’t to say that you should make jokes about racial or gender stereotypes, but no one is really being systematically oppressed for using a Hydro Flask.) However, environmentalism, a huge part of the VSCO Girl image, isn’t really something to be joked about. By making it seem like caring about the environment is a thing that will get you made fun of, people are subconsciously discouraged from caring about the state of our planet. Furthermore, the kind of environmentalism that is being made fun of is shallow: saving the planet isn’t all about turtles and metal straws. It implies that some girls don’t really care about conservation but instead do it because it gives them clout.

“I think that everyone should like what they like and they shouldn’t be made fun of for what products they choose, but I also think that a little teasing won’t hurt anyone sksksksk and I oop-” said Fiona M. ’21. She’s not wrong; VSCO Girl spirits and seeing fathers pretend to be them are undeniably enjoyable. In fact, mine and many others’ attitudes towards VSCO Girls is kind of hypocritical and confusing. While it is true that teen girls should be allowed to be who they are without mockery, it’s also really fun to make jokes about them. It is here where the “VSCO Girl Paradox” lies: as I preach that teenage girls shouldn’t have to be made fun of for their interests, I also think playing into the stereotypes is kind of funny. By making fun of myself, am I contributing to another way in which women have been put down?

It can sometimes seem like teenage girls don’t get a break. No matter the way you choose to present yourself or act, there is a derogatory name to describe it. The way we dress, the way we hold ourselves, the level of effort we put into our appearance, and so many aspects of our image can be grounds for mockery. “I think teen girls get the brunt of it, but let’s be honest, women will be mocked for whatever they do,” said Anjali K. ’21. The otherwise mostly-harmless teasing of VSCO Girls represents a larger issue: that women and girls are constantly made fun of for their interests in a way that men and boys aren’t. Interests that are considered masculine are catered to. It’s why mostly men’s sports are televised and gaming tournaments exist. While masculine interests are praised, why are women trod upon for liking fancy lattes or statement makeup?

The moral of the VSCO story? Like what you like. Don’t let the fear of being seen as “basic” distract you from wearing what you want to wear or consuming whatever you want to consume. The VSCO Girl definitely won’t be the last teenage girl stereotype to be born out of the internet. Besides, who really cares? In the long run, it won’t matter whether you wore a puka shell necklace for a while in high school or not.