As this summer comes to an end, and as the school year inevitably follows, we usher in new classes, friends, teachers, and, most importantly, a milestone for our whole school. This year, Lakeside celebrates the centennial of its founding. Not only that, the 2019-2020 school year also marks the twentieth anniversary of Bernie Noe’s reign as head of school. Thus, as students arrive back at school this September, it might make the early mornings and late nights easier to remember that we are living through a momentous time in Lakeside’s history. 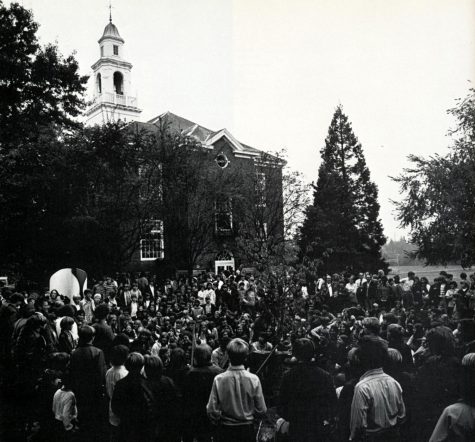 itol Hill neighborhood and eventually moved to 1501 10th Avenue E in 1926. Meanwhile, Moran-Lakeside School had two locations, one on Bainbridge Island and the other on the shore of Lake Washington in the Denny-Blaine neighborhood. A year after opening, the Moran-Lakeside’s Denny location moved to the Bush school’s current location. Eventually, in 1930, Lakeside would establish roots at its current location.

Even before merging, there was already inter-campus mixing. A St. Nicholas student, Karin Williams, attended an advanced physics class at Moran-Lakeside in 1969 — her school only offered three years of science, while the all-male school offered four. This co-ed education became normal two years later. One of the reasons for the merger included the economic strain that St. Nicholas faced, as well as the difficulty the school and adults had with adapting to cultural changes; students often rebelled and questioned the more traditional and conservative rules of the school. The merger was finalized in 1970 and the last all-boys class graduated from Lakeside in 1971; their yearbook quote embracing all the change was, “Something new, Nothing old, Something true, Something bold. No spirit of the past can hold you back from the BRAVE NEW WORLD.” One can still see the memorial of the last all-boys class in front of Pigott Art Center.

Lakeside’s history is rich — it has gone through numerous changes, and its past hides many gems that are unknown to the current student body. For example, there is a 350-page PGA cookbook created in 1984 that can be bought online for ten dollars. A lot can be uncovered with a search through Lakeside’s online archives. Of all the buildings on campus, three of them have been utilized by the students and faculties for almost nine decades this coming September — Bliss, Moore, and the Refectory.

Once the sole academic building on campus, Bliss housed a variety of classes after being built in 1930. From biology and chemistry labs to a dark room, Bliss had it all. Additionally, in the 1930’s the attic was once utilized as a practice area for the Lakeside Rifle Club — in 1939, the club won the fifteenth place out of 342 participating schools nationwide. During World War II, the bottom floor of Bliss served as an air raid shelter and the headquarters of the Local Defense Area # 2 of the State of Washington Emergency Defense Commission for civilian defense. As part of the program, sentries were armed with massive guns and placed strategically across campus. The basement was also once occupied by the arts program, which was moved to the new Pigott Arts Center upon its construction in 1998. The building, after eighty years of use, was finally renovated in 2010. Bliss’s past is quite different from the Main Office and the offices of the Language and History Departments that occupy it today.

As one walks back onto campus on the first day of school, or for those lucky fall-sport athletes that have already been back on campus for a few weeks now, it is a good opportunity to reflect on all that has happened on these grounds in the past hundred years. Then, maybe ponder all that could happen — after all, the fourth floor of Bliss still holds many secrets.

1930: The Refectory, Bliss (the academic building), Moore (the dormitory), and the gymnasium are built

1941: Local Defense Area # 2 of the State of Washington Emergency Defense Commission is stationed at Lakeside