The Great Salt Lake is Dying. 10 Million Birds and 2+ Million People Could Follow 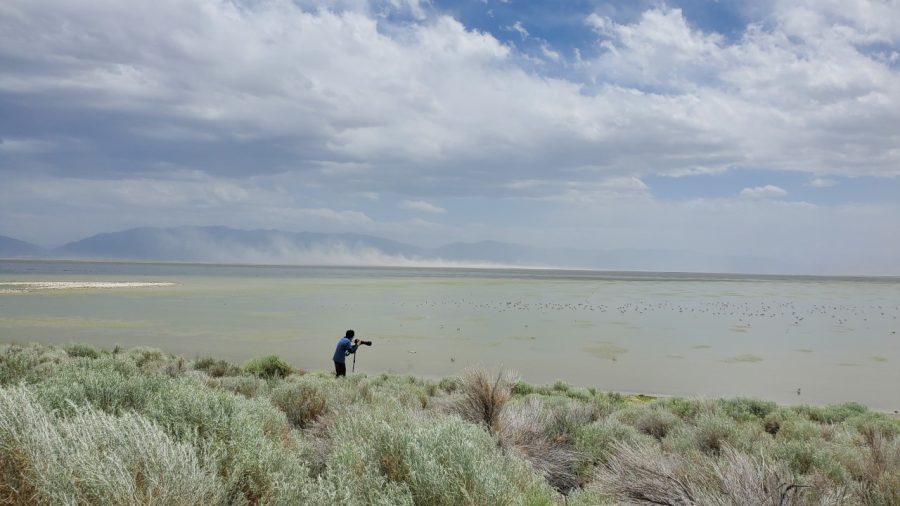 I’ve searched for birds in many places: the highest peaks of Kauai, the valleys surrounding Eastern Washington farmland, and roads neighboring Southern Californian desert geothermal plants. I’ve been thigh-deep in flooded Skagit fields and awake before daybreak striking out for tick-ridden deciduous forest. I can now add “being eaten alive by mosquitos at 6 a.m. in the Utah desert” to my list, leaning out the window of a rented sedan in the morning light of the Bear River Migratory Refuge — eying grazing avocets, gliding terns, calling blackbirds, floating pelicans, and paddling grebes — this past June.

Hours later, I was wiping sleep from my eyes as I left Antelope Island, camera in lap. Despite the productive 8 hours of birdwatching — for which we had traveled 14 hours — I couldn’t get over a feeling of disappointment. A two-hour detour to the island had been largely fruitless as most birds seemed to flee for shelter from the absurd winds. However, as I crested a hill approaching the causeway between the island-turned-peninsula and the mainland, the wind turned from an annoyance to a terror: it was picking up the exposed lakebed, the midday sun and chalk-white salt giving the resultant cloud a vaporish, ghostly apparition, as if a portent of death.

In a way it was. The Great Salt Lake is dying, and with it so is the wildlife. Millions of people live in the area, along with lucrative agriculture that further saps water from the dehydrated lake. This was the first summer where the salinity spiked above sustainable levels, exceeding brine flies’ capabilities to filter out salt while retaining enough energy to reproduce. 10 million migratory birds depend on these flies on the brink. I worried for the birds that depend on this modern oasis for nesting, feeding, and resting each year, but I soon learned the ongoing environmental catastrophe extended beyond the seemingly distant threat of loss of avian biofauna.

Christopher Flavelle wrote in the New York Times that, with wind storms picking up a wealth of once-dormant arsenic, “the air surrounding Salt Lake City would occasionally turn poisonous,” creating “death clouds” like the one I had skirted past on my way back home. More than two thirds of Utah’s population live in the path of this carcinogenic dust, a population that only continues to grow and consume snowmelt that the lake desperately needs if its denizens are to survive even a few more years.

Even in the face of this catastrophe decades in the making and years until completion, human frivolities persist. Flavelle describes how a citizen looking to “do the right thing for [their] community” by not watering his lawn faced a fine by their local homeowners’ association. A bill restricting this sort of behavior by homeowners’ associations and neighborhood organizations failed when local governments lobbied against it and blocked propositions to require water-efficient plumbing or increase the price of water. This fact stands even as “of major U.S. cities, Salt Lake has among the lowest per-gallon water rates,” and consumes almost a quarter more water per person than Los Angeles, another city facing climate change-related drought.

As I stood in front of my car at the Bear River Migratory Refuge, assaulted by mosquitos, watching hundreds of swallows swirling around like their own proper swarm and dozens of other species flying in the distance, I could barely begin to imagine a scene where the water – already scant in the area – had all disappeared, and these birds along with them. Yet at the same time, I could scarcely believe that Antelope Island had at one point been an island — the lake’s drying had long turned it into a peninsula. When I first set out the afternoon before, I never considered that this could be my last time visiting an oasis seemingly destined to soon be decimated. As I left the area, watching a dense ghostly white cloud envelop the region in a slew of toxic particulates, I thought of the millions living there and the thousands that flock to the quickly-growing region even now.

Lawmakers must work quickly, and should have worked sooner, to prevent the worst of a cataclysm that may put millions at risk of deadly lung disease. Yet even with this region “[at] the precipice,” officials refuse to make even miniscule change, or do the opposite and bar it from occurring. By the time that our generation grows into positions of power, it may be too late for millions of lives, bird and human alike. The Great Salt Lake represents a fast-approaching future, one with a fight for our survival we have long put off. Its disappearance, and the ensuing destruction of millions of lives, by our hands symbolizes a fight for the almost-present. The lake will prove our ability to fight for our present, if not our future, and we must rise to the occasion lest we concede defeat to our own self-destruction.