When it Rains on Their Parade: Lakeside Needs a Graduation Rain Plan 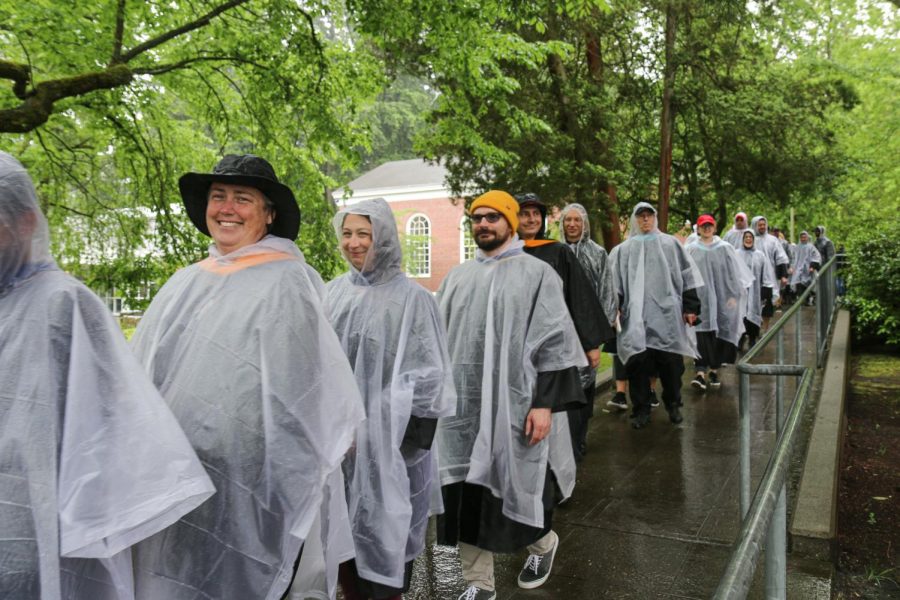 Some schools host it in the gym. Some postpone until the next day. Some prioritize placing grandparents under cover. Yet Lakeside does it a little differently; they choose to erect a smallish tent and hand out semi-waterproof ponchos.

We all adore graduation — the myriad traditions, the “Pomp and Circumstance,” the smiles and grandeur! It’s a true hallmark of the school year: that one day just after finals, when students, parents, grandparents, and friends alike convene in the quad to revel in the success of the senior class. This year was no different, and every parent and administrator whom I interviewed about the event first described how proud they were of the graduating class. Notwithstanding, discussions on the joyous nature of the day’s events would eventually turn to a different subject which had been present at this year’s festivities: the rain.

It poured that day. A glance at Instagram will yield hundreds of smiling kids with matted hair and dripping gowns. As Seattleites, I’m sure we’ve all grown to accept sudden downpours regardless of sunny forecasts, but the school knew about the rain well before the event, with Mr. Bonar admitting in an interview that he was cognizant of the forecast “a few days out.” In response, they erected a tent and distributed ponchos, both of which suffered from respective shortfalls. The latter items, though well-intentioned, weren’t fully rainproof, with attendee Nara C. ’25 recalling that “[someone’s] dad was given a poncho, but by the end of the ceremony, his pants were soaked.” As for the tent, it only covered about twenty-five percent of the field and was filled on a “first come, first served” basis, meaning that the majority of the grandparents and children in attendance — those with possibly compromised or less-developed immune systems — were left to sit in the cold rain. At one point it got so bad that many grandparents sought refuge in the WCC, causing them to miss significant parts of the ceremony.

Mr. Bonar mentioned how administrators have, in the past, hosted regular conversations about the possibility of rain at commencement. Administrators held these same talks before this year’s commencement to explore hosting it in the gym, but they ultimately did not conceive an alternative, primarily due to precedent and the threat of COVID. Nara confirmed this with her own experience: “From the way they put it [in emails], there was no alternative plan. It was this or bust.”

In the end, graduation was certainly a hit. “It was kind of fun, kind of different, kind of unique,” Mr. Bonar reported. “It was one of those experiences we all went through together, and it made it more memorable.” However, I do still believe Lakeside’s response to the rain represented obvious oversights. They possessed knowledge of the rain beforehand, yet their actions to address it were lackadaisical at best. For hosting an outdoor graduation, I do agree with their decision not to have erected more than one tent. While this may seem counterintuitive, my discussion with Stefan Weitz (parent of a ’22 graduate) confirmed my belief that the addition of tents would’ve obscured sightlines and made it incredibly difficult, if not impossible, for those in the back to see. That being said, I also believe there exist other areas of the plan where the school could significantly improve.

Firstly, I think it’s crucial Lakeside develops a “fallback” plan in the case of downpour. As Mr. Weitz commented in his interview, “It’s suboptimal that in a place as prone to rain as Seattle, the school would hold commencement ceremonies outside. I believe we need to take a step back and ask the bigger question of ‘What’s the rationale for conducting them outside?’ and use that to find a solution that doesn’t demand head-to-toe rain gear.” He implied that we should permanently move graduation inside; I only partially agree. I enjoy outdoor graduations — my graduation from Lakeside middle school was held on the Quad and truly superb. Further, these outdoor ceremonies maintain undeniable importance in the pantheon of Lakeside traditions. Thus, I don’t think direct abolishment because of one rainy year is the appropriate route. On the other hand, the concentration of rainy days in the late-May/early-June period is also undeniable, which would necessitate change. Therefore, I think it’s important that Lakeside be ready to, if necessary, move graduation ceremonies to the gym. While this wouldn’t be ideal, it would preserve the longstanding tradition of having outdoor commencements while still solving the issue of keeping everyone healthy and dry should there be a credible threat of rain. Such a “fallback plan” would be relatively easy to execute, requiring the school only to rent extra chairs for a day, and should be an expectation for Lakeside graduations moving forward.

Nevertheless, I do realize there’s both some pushback to hosting it in the gym on account of capacity concerns and the added cost of renting more chairs. Accordingly, my second recommendation (assuming the tent expansion isn’t feasible) would be to triage who gets access to the tent. As I said before, the tent was filled up on a “first come, first served” basis, which left many grandparents and others who arrived late to the ceremony in the rain. These populations, whose immune systems may not be as strong, should’ve been given priority seating under the tents. This solution would protect our most vulnerable and prevent them from having to retire to the WCC midway through.

Finally, should Lakeside expect rain but still choose to host it outside, two emails should be sent to families (one well before the ceremony and one the day of) reminding them of the possibility of rain, stating plainly what Lakeside is doing to respond to the rain, and if not everyone can be protected, prescribing the use of personal jackets. This way, everyone will arrive at the ceremony adequately prepared for the elements and ready to enjoy graduation rain or shine.