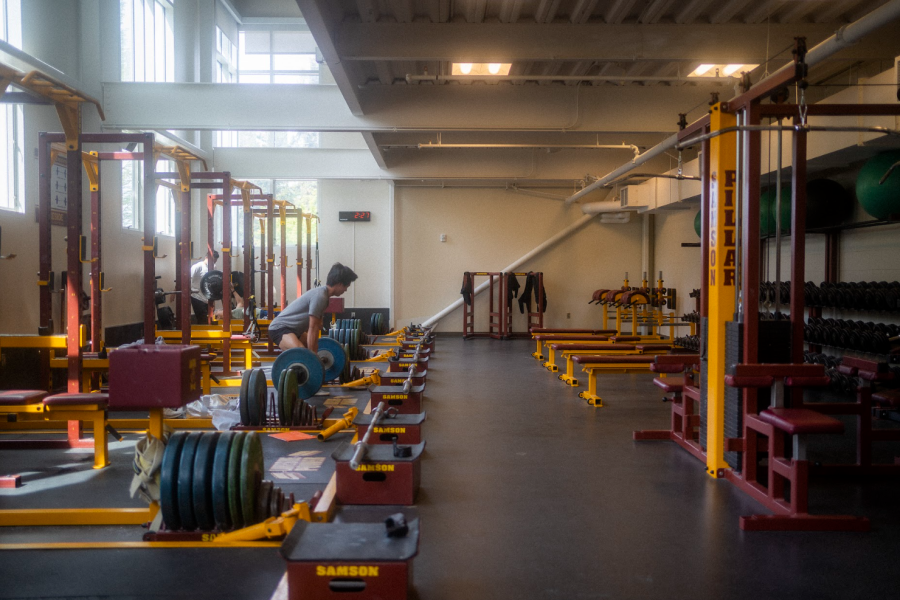 Perhaps the most popular Physical Education program, Strength and Conditioning makes an fine, if not necessary, supplement to athletic excellence

Eighty percent of Lakesiders participate in a Lakeside sport; that’s 50,000 hours of work put into school athletics every year. Lakeside students also spend more than 20,000 hours in P.E. classes every year, even if they participate in sports, with Lakeside or otherwise. This practice is unusual among schools in the Seattle area. Other high schools, including those of the Bellevue School District, allow students to count athletics towards P.E. credits. So why does Lakeside separate sports and physical education? And should the school reverse course, instating a new policy whereby the two become linked?
Physical Education Department Head Kyle Lawhead gave an uncommon argument when he expressed, “I feel that there is great benefit in student athletes being exposed to a variety of sports and fitness concepts to gain knowledge regarding how to stay physically active outside of an organized sports team.” For example, Mr. Lawhead added that even though he played baseball in high school, it is difficult for him to do so as an adult; an opportunity like required P.E. classes provide opportunities to continue to exercise more easily throughout adulthood.
The school argues that physical education, meanwhile, allows students to remain physically healthy when sports would not because physical education prioritizes teaching students how to exercise to maintain a healthy body rather than to excel at a particular sport. This sort of argument is the school’s most used against counting sports towards P.E. credits.
However, students spend thousands of hours on sports per year, and Emily P. ’25 noted that “we get enough exercise from them anyway.” She felt that students would save valuable time if the school changed its rules, especially since sports are already a large commitment: “We could use our P.E. classes to take another class or use them as a free.” Many share this view—understandable given that over 80% of students participate in sports: 76% of Tatler Poll respondents agreed with the statement, “Students should be allowed to count hours in sports towards P.E. credits.” Of those, 51% felt that only in-school sports should count towards P.E. credits.

Beatrice B. ’25 added that “different people get exercise in different ways depending on the activity that they enjoy, so allowing them to do a sport they’re actually passionate about/enjoy will lead to more exercise.”
Meanwhile, Head of School Bernie Noe expressed a more history-based view. He noted, “P.E. electives are Lakeside’s answer to having P.E. followed by a football game. In semesters where students participate in sports, they can elect to pick an easier P.E. class—say, Yoga instead of Strength and Conditioning.” Because of the ability of student choice in P.E. classes, he expressed that counting sports towards P.E. credits weren’t necessary, and such a policy, while possible, would be extremely unlikely. Furthermore, Mr. Noe differentiated between in-school and club sports: “If Lakeside were to ever adopt such a policy, we would never count club sports, only those done with the school. This is because with school sports, we can retain an element of quality control.”
“Quality control,” in this case, expresses that Lakeside is able to keep tabs on school sports and that the school knows what student athletes are doing; however, with club sports, “quality control” is not possible, so the school could not officially endorse club sports counting towards P.E. credits.
Mr. Noe went on to address student concerns about the duality of sports and P.E. He explained, “Considering the small amount of homework as compared to years past, students do not really need another free period to work on it.” Much like Mr. Lawhead, he reiterated that sports and Physical Education classes offer different experiences to students and so students should do both.
Every school has its oddities, and sports counting for P.E credits is one of Lakeside’s. However, Mr. Lawhead and Mr. Noe were able to explain that Lakeside views P.E. as different from sports in its goals and just as essential. According to them, it teaches students skills needed to stay healthy in adulthood. With that said, students were able to offer their opinions on the policy—their main argument being that Lakeside’s policy is time inefficient: they believe their time would be better spent doing homework or taking another class. These arguments will need to be assessed and addressed by the new directors of the school.