The Lakeside Tombstone: Historical or Harmful? 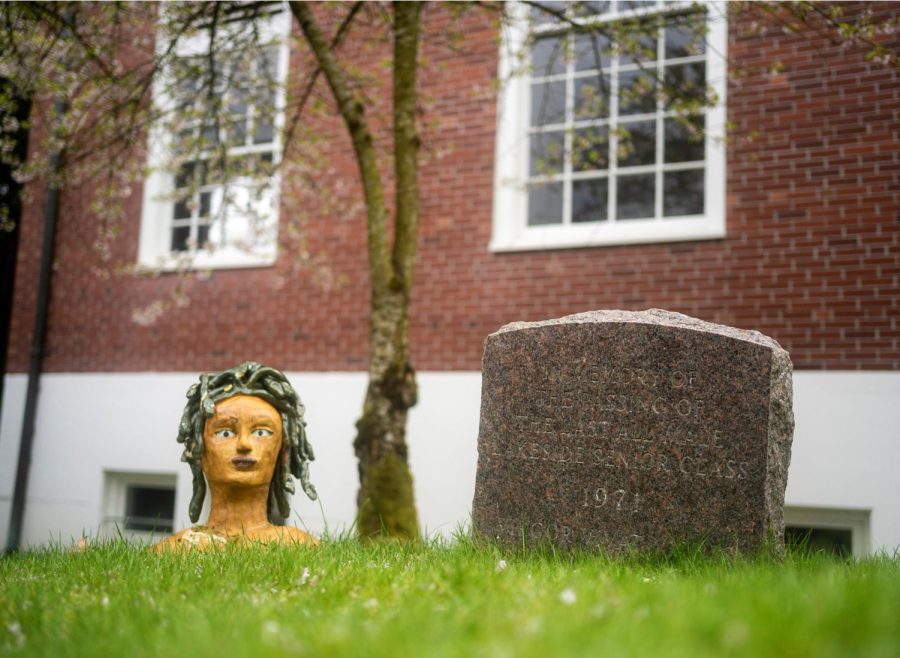 In memory of the passing of the last all male Lakeside senior class, 1971. Virgor vivat virilis.

After hearing so many people’s thoughts on the infamous Lakeside tombstone, it’s hard to recall my own first opinion. Thankfully, I’m talkative about these things, and my mother remembered on my behalf. “You were confused,” she recalls, “I think you said something like ‘Why would the school even do that?’” Given that I still somewhat feel that way, I’m willing to take her word for it.
Dan Clancy ’71, who came up with the idea for the tombstone, was the fourth Clancy brother to graduate from Lakeside. “This was a way to leave our mark on the school,” he says. “It was the end of an era.” The school was in the midst of a massive shift. Not only was coeducation about to officially begin (with Lakeside having been an all-boys school up until this point), but the merger with the St. Nicholas School meant that the school would more than double in size. To commemorate the change, that year’s “senior gift” was the first permanent one in school history: the tombstone, whose inscription reads, “In memory of the passing of the last all male Lakeside senior class, 1971. Virgor vivat virilis.” Ironically, rather than translating to “long live manly vigor,” the Latin is misspelled as “long live the manly virgin.” (Source: Google Translate…sorry, Latin students.) Mr. Clancy and fellow ’71 alums agree that it was purely meant as a joke, and that they all support coeducation. It was intended to remind future co-ed classes to “not take themselves too seriously and have fun.”

Lakeside students for the past 51 years have walked past this odd memorial in front of the arts center. It stands out from the neatly trimmed landscape, all sharp corners and dirt-covered engraved letters. The words inscribed on the front are all the context a passing student receives about the tombstone’s origins. When asked in the Tatler Poll what they knew about it, students responded with, for example, “nothing” and “there’s a spelling error and it’s kinda sexist.” One student told me that when she first heard about the tombstone, “I was like, what the heck? It just doesn’t seem like something Lakeside would still have on campus.”
History teacher Nancy Rawles agrees. “I can’t fathom that something like that tombstone would be tolerated at Lakeside if it referred to race rather than gender.” If it read, “In memory of the last all-white class,” it would obviously be considered unacceptable, and for good reason. So why is gender different?
She argues that despite its joking intent, the memorial doesn’t reflect the school’s current values. With our focus on diversity, equity, and inclusion, it’s hard to overlook such a prominently placed reminder of Lakeside’s less socially aware days. Ms. Rawles takes this tombstone as a physical indication of a larger underlying problem. In liberal places like Seattle, there’s often a tendency to dismiss problematic pieces of history and to simultaneously consider ourselves morally superior to less accepting places. Though we have a lot to be proud of, Ms. Rawles believes we need to realize that things of this nature are exactly like things that happen elsewhere, in less accepting areas of the country.
I’ve been researching this monument and its history since early March, always intending to write an Opinion article. It was important to me that this not be a News story, as I didn’t feel that I could write about such a divisive issue that I felt so strongly about with an unbiased perspective. I hope I’ve given context to the issue in such a way that you, dear reader, may form your own opinion. Mine, however, will happily be shared first.
There are a series of problems and a series of answers to be uncovered here. Most people I’ve spoken to fall into one of three categories: 1) the tombstone should stay as is; 2) a plaque explaining the context should be added; or 3) it should be moved to the archives in Bliss’s top floor. I agree with the third.
The tombstone was uncalled for back in 1971; in fact, every senior gift before this year had been fleeting, not a physical addition to campus. Though I can understand wanting to make a lasting impact, I think there were better ways to do that than a questionable tombstone. Because of the unprecedented lifespan (pun intended) of this senior gift, it confuses me why alums remain so attached to something that was never supposed to be permanent. One also must consider the time period. Not only was the tombstone created amidst the shift to coeducation, but also took place in the wake of the civil rights movement and during the height of the gay liberation movement and second-wave feminism. This was a time of radical change in America and Seattle, so it’s strange that, instead of celebrating that forward movement, the administration allowed a group of eighteen-year-old boys to “jokingly” lament that transition. And as to that intent, Ms. Rawles summed it up perfectly: “You have it set in stone, so don’t tell me you didn’t mean it.”
I will not deny the history of this monument. Though I respect the poll respondent who suggested we “let the girls destroy it with a hammer,” I think ultimately it’s worth keeping in the archives. Just because something has historical or sentimental value doesn’t mean it needs to be prominently displayed to anyone who visits campus and walks in the right area.
Bruce Bailey ’51, who worked at Lakeside for forty years (starting in fall 1971) and remains involved with the school to this day, says Lakeside has “never rested on its laurels, even when it could have…it’s always been evolving.” This is our greatest strength, he tells me. It’s up to the current student body to decide what kind of school they want Lakeside to be: not alumni, not parents, perhaps not even teachers or administrators. Ultimately, change is a good thing, and I believe us students will make the right choice. It will be the right choice as long as it is ours.