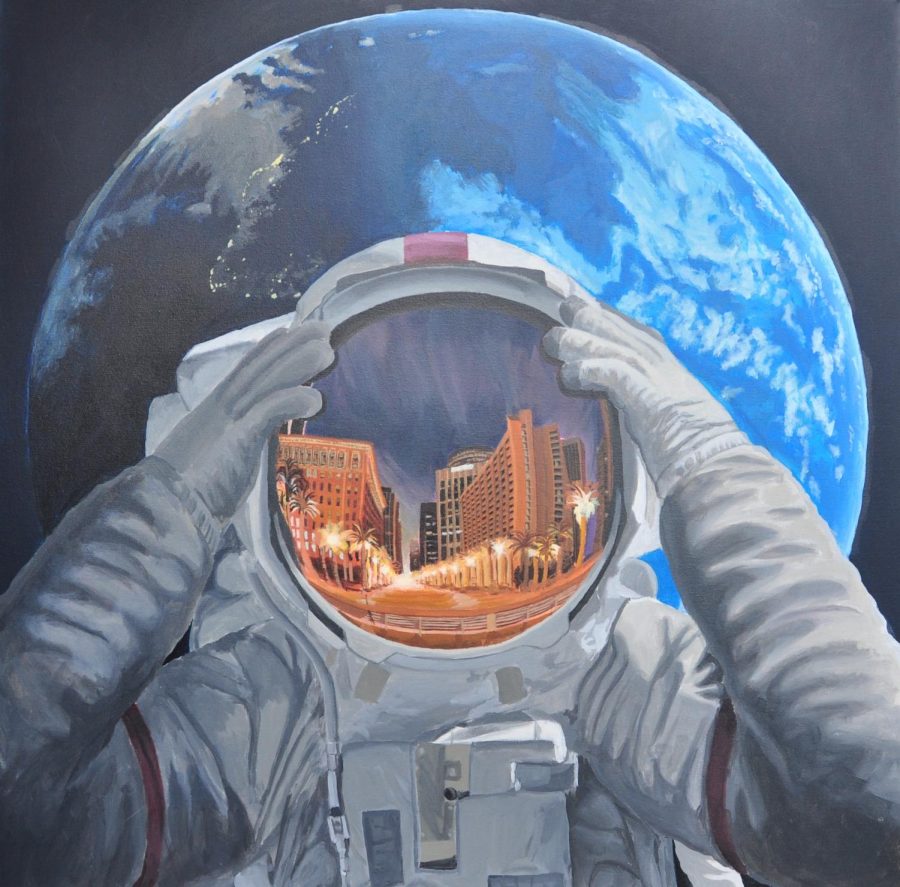 The 20 Under 20 exhibition at the Bellevue Art Museum reflects a growing credence toward young artists. Particularly with current issues, giving young people a voice is increasingly important and thus more commonly accommodated – this year with the prompt “how do you rise up from challenging times and envision a new future?” Of these 20 local artists between the ages of 13 and 19, four of them are Lakeside students. To allow all four sufficient representations – and for my own sanity – first in line are Henry R. ’23 and Sam K. ’23.

Henry started photography in the summer going into sophomore year, though he took photos on his phone camera before. He does, however, vouch for his artistic ability going back to Kindergarten. In particular, he highlights “a Thanksgiving turkey I drew in first grade. I think I peaked as an artist in first grade.” Explaining why, he cited how he made it three-dimensional, both physically and symbolically – “it was a commentary on society: about global warming, about discrimination, and about Thanksgiving.”

He eventually chose photography as his main medium since it “captures the world,” though the field’s image as an “honest art” is complicated. For example, “in photography class we do a lot of editing … so that’s a question I’m always asking myself: am I being honest?” This debate also leads into the conversation over the line between editing and photographic art – especially in more “Photoshop-y” pieces – and what constitutes “art” in the first place.

Henry’s winning entry was a photograph, titled “You are the president, what do you do?” starring his younger brother. He takes the Lakeside photography class – which he credits as very good, and with “so incredible” teachers – and took the photo originally as part of a portrait assignment, using a toilet paper roll to create a tunnel effect focused on his brother, pointing at the camera. Asked for the reasoning behind the shot, he said it was “because I’ve always loved that iconic shot with James Bond looking back at the camera.”

This inspiration represents a deeper draw of interest from film. He watches many movies and creates his own, and will often “watch a movie and go ‘I love that shot’” when looking for inspiration either in film or photography, citing how movies combine many different art forms. “And also movies are fun,” which is something he feels many critics lose sight of.

Sam did take art in his freshman year but has mostly been doing it extracurricularly. His acrylic painting, “A return to better,” portrays an astronaut with the Earth as a backdrop, his helmet reflecting a view of Las Vegas. He originally came up with the idea as a simple bout of inspiration. “I thought it would look cool,” Sam conceded at first, but morphed into “a reflection of the pandemic and being isolated from everyone else. [The astronaut] comes upon this new city, which is him looking toward the new future … and how we can come out of these difficult times … and go towards a better future.”

He’s always liked drawing, and been taking lessons for about four years. Acrylic painting in particular is newer for him, but Sam has been doing much lately; “I like it because acrylic gives you a lot of freedom: you can go really detailed or you can take it back and go more abstract … it can be very time consuming but it’s also very rewarding.” Given the more surrealist nature of his painting, this exercise of freedom comes through clearly.

Both Sam and Henry are excited to be featured at the Bellevue Art Museum, especially given the excellent works submitted even by other Lakesiders and getting to be “in a museum I’ve gone to,” per Sam.

Finally, both offered some words of advice for aspiring artists at Lakeside. Henry says, simply, “do stuff, try stuff. Have fun with it” and to “go where your eye takes you. Break all the rules, follow all the rules, and do what you think is right.” Sam adds, “with art just do what you love. Art and creativity doesn’t work if you try to force it, so if you’re not having a good time try to switch it up.”

The Bellevue Art Museum is showing the 20 Under 20 exhibit starting on May 6th to October 2nd. In addition to Sam and Henry, the exhibit will be showing works by Sydney Y. ’22 and Kaitlyn C. ’24, to be featured in a future article.