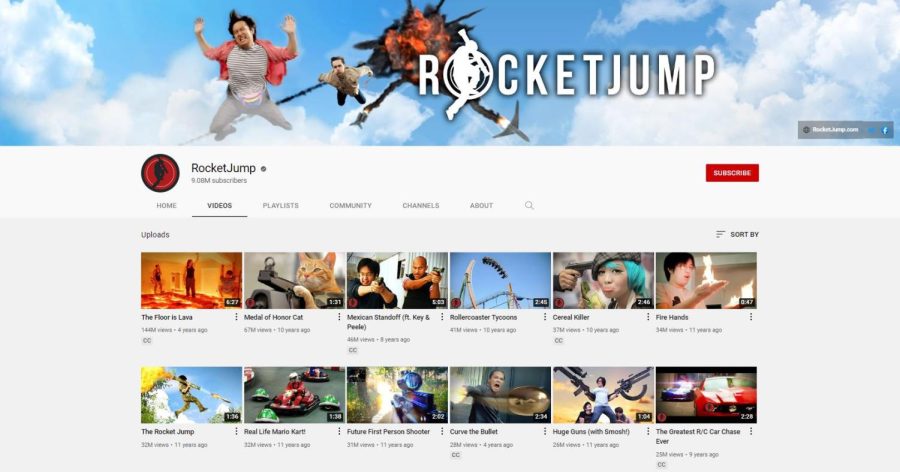 Among the most educational experiences of my high school career was sitting in Mr. Porter’s freshman wellness class and watching “Mexican Standoff (ft. Key and Peele).” That was the day I learned that Freddie Wong, one of the first greats of the YouTube platform had, in fact, gone to the Lakeside School.

Freddie W. ‘04 is perhaps best known for “RocketJump,” the YouTube channel for his production company of the same name. From 2011 to 2018 he posted a variety of videos, largely skit-based comedy shorts – often making use of visual effects – and later moving to longer projects in 2017. In this early era of YouTube, he and the rest of RocketJump became one of the first true YouTube success stories, garnering millions of views at a time where a few hundred thousand was considered extraordinary. Currently, Mr. Wong has pivoted to podcasting projects and other film-related projects, as well as RocketJump’s first feature film.

Graciously, he accepted a request for an interview for Tatler.

One of the most interesting recurring parts of our conversation involved the massive generational gap in experiences within the broad category of “film.” He stressed how dramatic this cosmic shift was in the years he spent on YouTube. “You can broadly categorize recent film history in three points … Gen X, older Millennials, and younger Millennials to Zoomers.” These distinct categories came about due to technological change: “for Gen X it was digital filmmaking … which was happening for us right around when I was in high school, and when we came into the industry the internet became a thing,” granting a massive boost in possible viewer count and breadth. Simply put, “for us it was IMAX, iMovie, and digital cameras, and for another generation it was phones, TikTok, and putting things online,” which becomes a “huge difference in terms of access to audience and what technology you are playing around with.”

Now, the major deciding factor is portability: “every tool from a filmmaking standpoint is basically on your phone – the iPhone had better … everything than anything we had access to, even if you were filthy rich you couldn’t match up.” For Mr. Wong, who has seen all three eras and dabbled in them, the brevity of each era becomes somewhat disconcerting – seemingly revolutionary changes blowing past within a few years. “It’s been a strange career path because so much of what we do has a bizarre feeling of a new, temporary thing because of how fast things are moving.” For now, however, “TikTok has become sort of the ascendant form of … amateur filmmaking, even more so than YouTube in a lot of ways.” The tools to make and edit movies have also changed drastically: 3D modeling programs such as Blender, and YouTube tutorials teaching amateurs how to use them, allow high-quality single-person CG projects to become far more common than could ever be conceived in Mr. Wong’s time.

This ease of creation leans into what he calls a more homogenized film scene, with “a lot of similarities to the ‘50s … it’s very studio-driven, very homogenized.” Of course, with brilliant indie movies coming out relatively regularly (most recently Everything, Everywhere, All At Once drew attention) “there’s a lot of interesting stuff still coming out, but the broad strokes is very Disney-dominated, is Marvel-dominated.” With less-“official” publishing platforms such as YouTube all the more widespread, the entry point for film may be far more accessible, but “it’s probably harder to get the funding for independent, weird projects than it used to be,” not to mention the film industry’s gatekeeping in regards to YouTube. Thankfully, while American film has reached a point of “almost boring,” as per Mr. Wong, the international market seems to be faring better: “South Korean cinema … even prior to [Parasite] you could see the trajectory, and … most recently my friends and I have been watching a lot of Indian cinema.” Movies always have a financial component. The commercialization and “safe-ness” of modern film is indicative of that. But “no era lasts forever, stuff changes all the time.” The studio institutionalization of the 1950s eventually gave way to a golden era of weird passion projects, and hopefully we will see a similar shift in the coming years.

Talking to a living legend of the online sphere was intriguing enough, but some of the most enlightening parts of the conversation was learning about the ways Lakeside has changed in just twenty or so years. Mr. Wong noted a few things that have remained constant – i.e. Mr. Porter – but he did note the dramatic increase in student-led clubs since his time at Lakeside. Upon hearing that the number of clubs has grown to over 70, he had me share my screen and scroll through the lsclubtracker page for almost five minutes (quick sidenote: “I love that there’s an Anime Club.” Freddie Wong Seal of Approval). One loss since his tenure at Lakeside seems to be “the most obnoxious pep band in the entire Seattle area.” While most pep bands used brass instruments, “our’s was a twelve-piece rock-and-roll outfit, so we would play amplified instruments … every other parent from every other school hated our guts.”

One unfortunate loss since his time at Lakeside seems to be Project Week. Mr. Wong actually had to inform me on this concept, where students would take an unorthodox subject in the week before spring break (i.e. wooden boat building). He credits Project Week as being one of the most influential parts of his Lakeside education, calling it “one of the coolest things that happened at Lakeside when I was there. If any of the readers want to bring it back I’d say bring it back.” In fact, that week with “Cartoons and Crackers” where he watched Castle in the Sky, manually edited in English subtitles, and ate crackers with his friend, “and I still think of how influential that one week was in terms of retooling my mind toward the career I ended up in.”

However, some things at Lakeside, like all good things in life, stay the same. One prominent constant is Bernie Noe. Lakeside’s head of school of 23 years made his debut just before Mr. Wong started his high school career, and left a lasting impression. “When we were making our movie sophomore year we had a scene where … our history teacher was secretly an undercover drug dealer.” Naturally, they “needed someone to play his lawyer and we asked Mr. Noe and he was like ‘sure, no problem.’” Mr. Wong recounts how in the context of this ridiculous situation, this interaction was “a huge moment for me in terms of my understanding of the world because that was a situation where I went up to the most powerful adult in the room and went ‘hey do you want to be in our movie?’ and he said ‘yeah, sure.’” This interchange went on to inform many of his decisions in his filmmaking career. “It taught me that there are no rules. You can do anything but you need to ask and be professional about it … it changed how I viewed the adult world.” He continued “it emboldened me in a way that has been pretty beneficial … it’s had a disproportionate influence on where I’ve ended up.”

Finally, Mr. Wong offered some words of wisdom for influencers and content creators at Lakeside. “We were lucky … we never had the problem of whether we actually liked doing it because there was never money involved … if you don’t like doing it in the first place, I don’t think you stand a chance.” The hardest part of this career path is finding that passion, having a “good sense of what you like, what your artistic tastes are, what you think is interesting, what you want to make videos about” because, “if you don’t like the process of putting something online, seeing the metrics come in, seeing how people respond – if you don’t like that, then that’s not what you actually like doing … you have to like both.” You need to break and bend the rules a bit, make connections find the best ways to maximize numbers – “if you don’t care about that, you’re better off just doing the thing you like to do … you can just bake, you can just do pottery, you can just do makeup, it’s fine.” You have to love what you do, not the idea of what you do.

That was one of the draws of Project Week as well. Although many projects were certainly rather … uneducational – Mr. Wong points out one called Strategy and Tactics that turned out to be students playing Age of Empires for 5 days – but it’s that element of messing around that defines high school, even brought him into movies. “This is the best time to goof off … Goof off productively,” is the main message to take away, and to remember that you can “waste time when you’re older.”

Freddie Wong stars in Dungeons and Daddies, a podcast about four dads transported to the world of Dungeons and Dragons and quest to find their sons. He and RocketJump are currently working on their first feature film – shooting began in November.

Also a note to Lakeside administration: you still owe Freddie about $2000 from his club account that was absorbed into general endowment. “We had money in there, and then we graduated, and then we kind of forgot about it … if you’re looking for donations you can take that off my tab.”