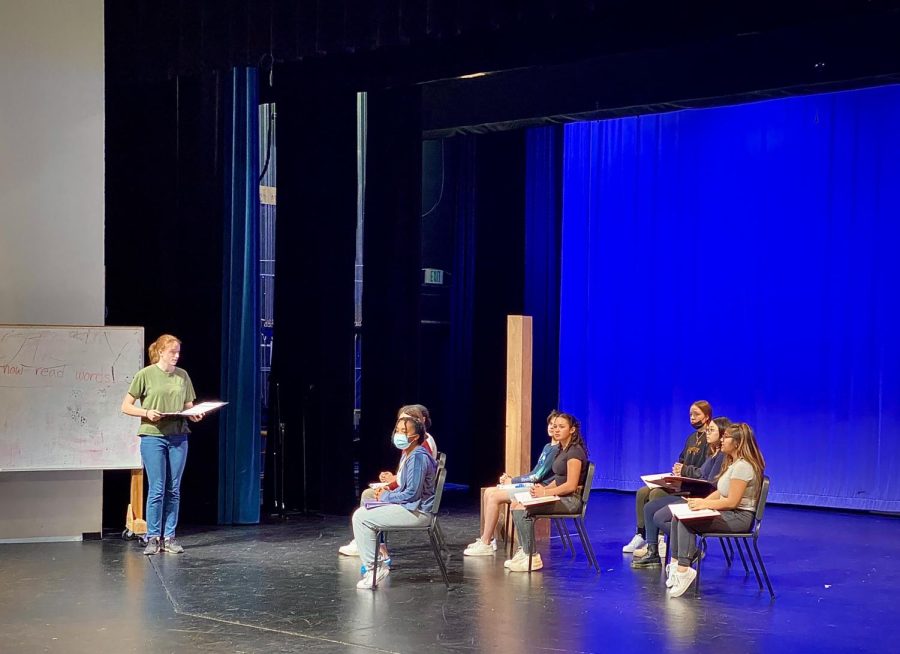 Nine students sit together in black chairs, arranged neatly into three rows; each clutches a binder painted in bright crimson or purple mountain majesty. At the front of the class, the teacher sits in front of a whiteboard dotted with cute cartoon caricatures of cats. Decked out in business-casual sneakers and jeans, the teacher rises now and turns towards the class with a very important question: “Today is a very special day–your first day at school! Now, do any of you know your two times tables?”

No, this is not a second-grade classroom, nor is it a mandatory session of a driver’s ed course. It is just one scene from Matilda, Lakeside’s spring musical for the 2021-22 school year. As of March 20, rehearsals for Matilda (pronounced Ma~) are in full swing. Every day, students from all walks of life come together in the St. Nick’s auditorium to prepare for their May performances, where they will sing and dance on stage in front of the Lakeside community.

Matilda follows the story of a bright girl born to parents who fail to recognize and support their daughter’s intelligence. Matilda is sent to a school run by Miss Trunchbull, a cruel authoritarian principal who trunch-bullies her students. Matilda befriends a teacher before developing telekinetic powers and (spoiler!) driving away the principal from the school.

On set, the casting decision for the all-important Miss Trunchbull role has been a somewhat controversial topic. Currently acting the part is Bernie Noe ’22; director Michael Place, known affectionately by those who know him as Micky, has called Noe the “ideal choice” because of his “long list of previous shows and general acting background.” Indeed, Noe has starred in Sweeney Todd, Jekyll & Hyde, and Mean Girls, giving him unmatched experience playing psychotic antagonist roles.

Despite these credits, many cast members are up in arms over Noe’s presence in the musical. Some believe that he was cast by senior privilege, an alleged practice where upperclassmen are given more significant parts than underclassmen at Lakeside. (Noe, a graduating senior this year, has spent a whopping 23 years at the upper school.)

Cast members have also complained about Noe’s attitude towards others. Post-apology video, he has repeatedly told other students that they are “not special” and should “sign up for more PE courses,” behavior which he passes off as method acting. Lucy K. ’24, an outspoken leader of the protest movement against Noe, says that he is a perfect match for the character. Still, his comments during rehearsals have been disruptive. “He’s taking his role too seriously,” Lucy claims.

Even outside of the musical, Noe has begun incorporating elements of his character into daily life. Classmates confirm that he now carries a hammer everywhere and otherwise behaves as if he is headmaster of the school. Around campus, Noe wears large jackets, which he calls–quite cleverly, one must admit–Trunchcoats.

Some members of the cast remain in support of Bernie Noe. These believers say that Noe provides the best portrayal of Miss Trunchbull and is therefore the best candidate for the part. In an interview, one believer declared: “He’s so good. He really nails the voice and personality of the character… I think the criticisms against him are pretty unfair. Someone slipped a newt into his Hydro Flask for no reason and we had to fish it out.”

It’s difficult, however, to get an accurate read on how many members genuinely agree or disagree with the casting decision. After all, the decision has opened a rift between cast members, with some even breaking off friendships with those whose politics do not align. “I don’t want to tell other people about my beliefs,” a self-proclaimed ‘closeted believer’ told me. “We’ve been scared into silence, by Lucy K. and others, who wish to present our side as a small and unimportant minority.” For fear of retaliation, the interviewee asked to stay anonymous.

Both the effervescent music director Gloria Alcalá and always-energetic choreographer Nicole Beerman have lauded Noe’s performances. Nicole says that he has a “great sense of style” and understands how to carry himself on stage as Miss Trunchbull. Glo, meanwhile, complimented him on “awesome vocals” as well as “flawless Boston accent” during Smell of Rebellion and Hammer, two major songs for the Matilda character.

Still, Micky has the final word on the matter, and thus far seems to respect the protesters’ demands. Should Bernie Noe be removed from the production, his understudy Julian M-B. ’23 (a fantastic actor himself!) will step in as Miss Trunchbull for the performances. Felicia Wilks stars as Matilda.

Performances of Matilda will run from May 19 to 21.