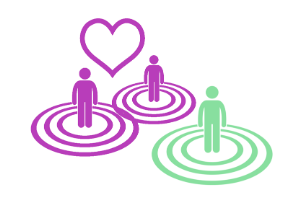 Starting this month, students opening their Trace app will be surprised to see its neon green circle transformed into a glittering pink heart. No, this is not an error message informing you that you need to give Trace access to your cardiac biometrics. It’s simply a new feature of Trace, released last week.
As the pandemic wound down, the Trace developers saw schools—Lakeside among them—gradually phase out usage of their app. So, true to the “innovations” in their brand name, they devised an ingenious new use for the app, turning the healthy green into the romantic pink.
“It was a pretty intuitive shift to make,” says an anonymous Trace employee. “We’ve been collecting students’ location data with pinpoint precision for, like, a year now, and we can’t just let all of it go to waste.” So, they say, Trace is now employing machine learning, data mining, and statistical analysis in order to match students with their most optimal romantic partners.

Using location data coupled with class schedules from Veracross and activity on Teams, Trace is able to infer the proximity of your interactions with your peers. As with their system for contact tracing, Trace “does not contact students or community members” in case of an identified potential couple, but instead “gives the administration the power to tailor their outreach when relaying sensitive information.”
Trace will, however, recommend the best routes for you to take between classes, during lunches, and after advisory to maximize the number of times you can accidentally run into your crush in a secluded place on campus. Of course, a Trace spokesperson clarifies, “nobody sees where you are, or what you are doing.”
Romance for high schoolers can be challenging and stressful, but Trace has the potential to “remove uncertainty and reduce risk,” just as its website says. Lakeside hopes that the latest update will aid students in navigating their relationships efficiently and effectively.