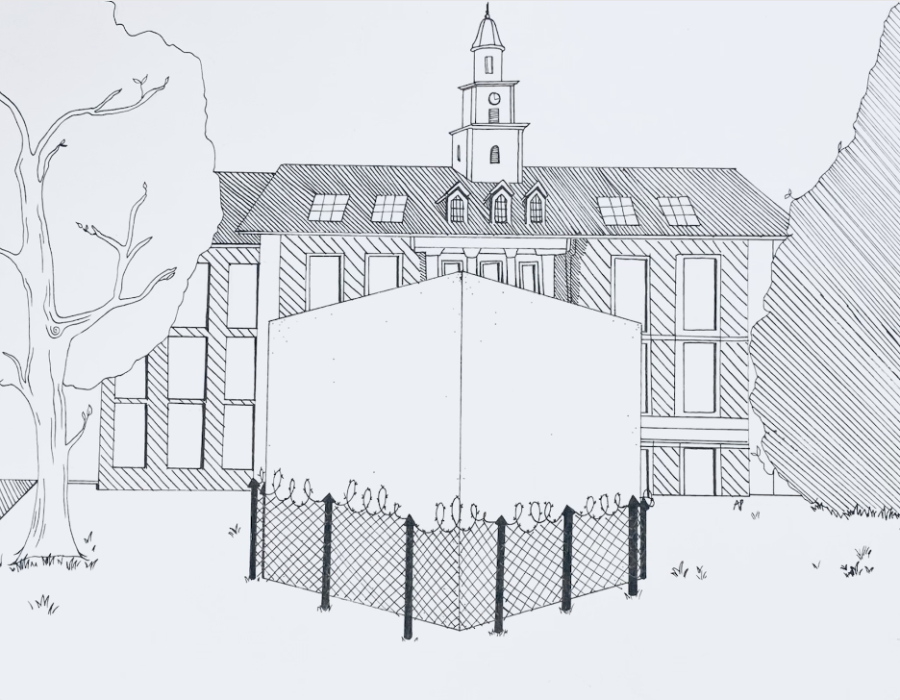 In the recent elections, almost every Student Government and Judicial Committee, candidate stressed themes of increased transparency and a need to improve student-JC/Stud Gov communication. Obviously, the JC and Student Government have heard the grievances of the student body, as they recently announced new plans for transparency and improvement which, among other things, contains major initiatives such as the relocation of all operations to a singular building to be erected in the middle of the quad. Both Student Government and JC maintain that these projects will build “significantly more trust between the student body and these committees.”
The first move is the construction of a new edifice to house the two councils. This building comprises a central cubic structure in addition to various “protective measures” to promote the security of Student Government and JC proceedings. The cube (whose equal proportions are representative of the Student Government’s commitment to equal representation for all) will be formed from six solid slabs of marble, so as to exhibit the two bodies’ purity and justice and will rise an imposing forty feet above the ground. Stud Gov and JC members alike claim that the structure’s immensity “isn’t to imply any superiority. No, no, of course not. We simply want to stress the importance of such institutions at our school and how they work for the betterment of students and loom above the peons.” Moreover, the solid-marble cube will be situated in the middle of the quad to “display Stud Gov and the JC’s passion for placing their role at school students at the center of everything, so students no longer accuse the bodies of hiding behind the walls of ‘official-business-that-cannot-be-disclosed.”

However, the monumental cube is not the only aspect of Student Government and JC’s plans to conquer the world. In addition to the cube, certain security measures will be implemented to ensure that only members of Stud Gov and JC enter the vestibule. Among the myriad proposed defensive measures, those deemed most “feasible” were a fence accompanied by what Stud Gov is referring to as “deterrent string,” a moat, three security checkpoints (with a fourth if you’re of level five clearance), the institution of two new security guards (whose salaries will be covered by a portion of the money usually appropriated for club funding), and a rottweiler. Representatives reassured Tatler that these measures were a “significant scaleback” of what was initially considered and that this will still encourage transparency and openness between the student body and their representatives.
In terms of communication, the two governing bodies have decided that emails are too often disregarded by students. Thus, they have decided to begin a new policy in which freshies are forcefully encouraged and encouragingly forced to painstakingly write out personal letters to each and every Lakeside student and their families informing them of the committees’ recent actions and/or decisions, to be delivered to their households in four to five business days.
Finally, the cube will also be outfitted with multiple cameras and long-range microphones so Stud Gov can “pick up on issues and what’s bothering the student body organically” through monitoring their everyday conversations and actions. As for JC, they have remained personally silent on the issue, declining to say anything further than “Again, we’re NOT spying on the student body.”