The Birds Are Arriving: Here Are Some Basic Tips To See Them 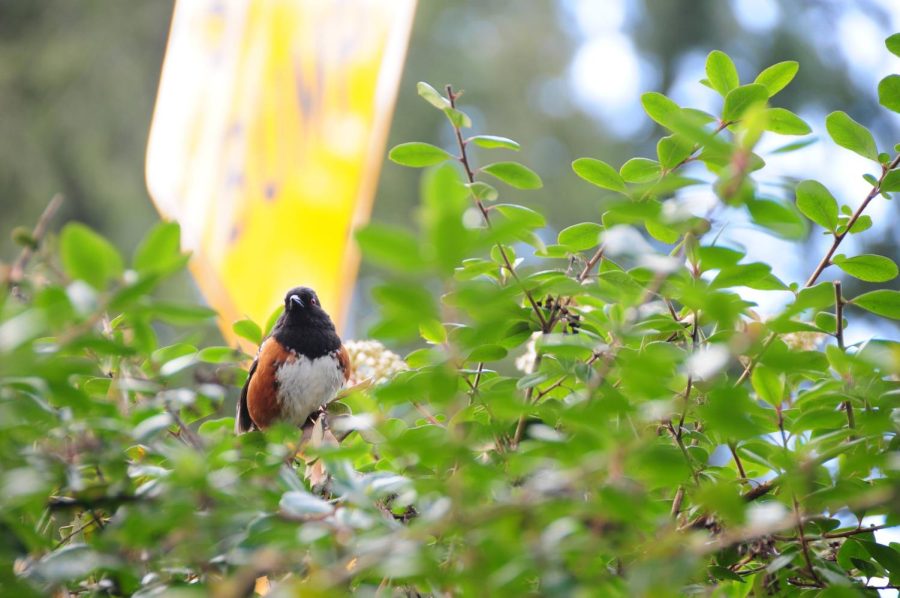 Nesting season’s coming up, so you know what that means: God has cast upon me a curse for my hubris, a mission to send to you lot of the Lakeside variety—that you need to get outside, touch some grass, and look at birds.

Spring is a truly special time of year for any birdwatcher, offering prime times to see one’s favorite species in their rawest, most awkward forms as said birds waddle out of eggshells and into the sky (or, alternatively, stick around their parents begging for worms for a few weeks). This blooming of avian pre-adolescents coincides with a migration period, as dozens of species make their way north.

This development, in addition to the abundance of interesting species going about their regular business, may seem overwhelming. And if it doesn’t, it sure will be once you step outside. But I started birdwatching in late March of 2020, so I guarantee you’ll survive the deluge and even thrive with these tips for birdwatching in the Puget Sound region.

Probably one of the most valuable pieces of advice I have is that you don’t need to go anywhere special to see birds. Sure, if you want to see such oddities as the serpentine American bittern, or scuttling semipalmated sandpiper, or the, uh, sora, you might want to pay a visit to a local wildlife area. But I spent the first few weeks of my career just walking around my neighborhood (a single hill right outside downtown Bellevue) and was blown away by what I could see on a regular basis; in addition to the assortment of little brown birds and crows, there were hummingbirds, nuthatches, merlins, red-tailed hawks, bald eagles, and woodpeckers. And the various “normal” birds like song sparrows, chickadees, crows, Steller’s jays, and finches seemed to peep out from every bush and tree. Especially in spring, with birds becoming virtuosos absent of stage fright just absolutely dousing the landscape in song from prominent perches. To further this point, Olivia W. ’22, a leader of the Bird Club, cites her backyard as one of her favorite spots, and member Landi L. ’23 cites the “crows on the Aurora Fred Meyer power line.”

These were all birds I had barely, if ever, noticed prior, which is where my most valuable advice applies: just look for them. That’s it. Birds work like confirmation bias: if you look for them you’ll find them. And always keep looking! That seemingly empty tree may contain a flock of impossibly well-camouflaged bushtits, or a whole Cooper’s hawk that one time.

If you do live in a truly urban area, you might still need to venture a few minutes out to your nearest park or area with trees (plural). My go-to is the Union Bay Natural Area, or Montlake Fill. Despite being near UW (with a pretty dang good view of Husky Stadium), and being built on a landfill, it is among the best places to see birds year-round. Great blue herons are almost a guarantee, there are magnitudes of ducks and the like all the time, ospreys and eagles are common fly-overs, and there are many of your typical woodland birds – woodpeckers, sparrows, finches, chickadees, robins, and the lot. If you’re lucky you can catch bizarre American bitterns, elusive green herons, timid Virginia rails, and skittish belted kingfishers.

Practically every park is prime for something. Mr. de Grys, resident faculty bird expert, recommends Billy Frank Jr Nisqually NWR and Juanita Bay Park, along with the Montlake Fill. Discovery Park, recommended by Bird Club member Eliot A. ’24, offers both forested areas and beaches – so, in addition to your songbirds and thrushes, include eagles, hawks, falcons, owls, herons, geese, and more. Marymoor Park has all your lot of wood birds, adding swallows to the list, but is especially noteworthy for the heron trees – places where herons, year after year, nest by the dozens in a couple trees by a gravel path walked by dogs and dog walkers. Going there in March through May is a must, though be prepared to hear incessant amounts of honking. Carkeek Park and Richmond share the same general coastline, so expect herons, seagulls, ospreys, and kingfishers (and seals). Point No Point lighthouse boasts the state’s largest species list.

If you’re willing to go beyond this circle, basically any natural area is ripe for the watching; the Cascades, oases to the east, Ocean Shores, the Wenas Campgrounds (which has a neat overnight camping even on Memorial Day), Mt. Rainier, Olympic National Park, Grays Harbor, and the various swamps, wetlands, and flats around Fir Island—my straight favorite place, period. It’s best in winter when the migratory snow geese and raptors are around – rough-legged hawks, short-eared owls, and increased numbers of eagles, northern harriers, American kestrels, and red-tailed hawks – but spring still boasts impressive numbers of shorebirds, swallows, and more. Last year I saw a great horned owl with two chicks, and let’s hope they decide to return. Also, I’ve made a tradition out of eating lunch at the local Popeye’s, and yes, I recognize the irony in eating a chicken sandwich while birding.

The same goes for equipment. I advise getting at least a cheap pair of binoculars (though be prepared for some field repairs when the lenses fall out), but you really only need your eyes or ears. You will obviously need appropriate clothes for the environment/weather, which means you should either get used to wet shoes or invest in the waterproof variety, because this is indeed Seattle.

If you’re willing to splurge a surprising amount of money, I’d get a lightweight tripod and spotting scope (fellow birdwatchers will thank you dearly), a guidebook, and brown waterproof equipment. If you’re really willing to throw money into the grinder, get a camera and learn how to use it. I personally can’t live without my DSLR – hell, I credit my old camera (a first-generation Nikon D300s) with dragging me into this world in the first place – but bird photography is a subhobby of an already-niche activity, so that’s up to you.

Other pieces of advice are pretty elementary, but you’d be surprised that people ignore them: be quiet, don’t move too suddenly (especially when a bird is in sight), don’t bring pets unless necessary, be courteous to your fellow birdwatchers, don’t be afraid to (quietly) ask questions, stay on paved trails, don’t litter, don’t scare the birds away, don’t get too close to nests (the parents will let you know when you’re too close), keep your distance from the birds, look for flocks (both of birds and birdwatchers), be patient, keep the sun to your back, maintain your spatial awareness, don’t wear neon colors, and be a decent member of society.

The next step everyone always flaunts is to learn bird identification and the sort. When you’re starting I wouldn’t sweat it too much, especially when faced with the near-imperceptible differences between the various sparrow species in the region. However, if you’re looking to keep a personal track or add to eBird’s massive database – by the way, use eBird when you can, it’s a great website run by the Cornell Lab of Ornithology that has aided unknown numbers of ornithologists – I would learn at least the basics of the skill.

There are four main categories: Size and Shape, Color Pattern, Behavior, and Habitat, in order of importance. The general size of a bird (i.e. 4-inch chickadee vs. a 3-foot eagle) immediately narrows the possibilities down, which is further aided by details such as neck length (a lanky great blue heron vs. a stouter pelican), beak shape (a needle-like hummingbird bill vs. a stubby finch bill), general profile (a streamlined falcon vs. a more loose-set crow) and more. The rest become more important once you have narrowed down differences to a couple of species, or you cannot tell size or shape well (i.e. a raven vs. a crow at distance. Ravens soar more while crows flap, falling under Behavior). At some point it becomes more of a reflex memorization game than anything else; once you have the general shape of the bird you can guess at specific species later. To be honest, bird identification warrants an article all for itself. For more information check out the Audubon Society’s excellent online sea of tips and tricks. If you want extremely fast field IDs, check out Cornell’s Merlin app (which also can ID through photos and audio recordings) but if you really want to learn your birds, nothing beats a field guide.

The point, however, is that you don’t need to go to Wooded Area #27, located seven hours from Seattle at the end of an unpaved road only accessible on the 3rd hour of the 3rd day of every other month during the full moon, to see some cool stuff. Nor do you need to get all of the hottest birdwatching equipment like it’s a ranked multiplayer video game. All you need to do is get out there and you’re bound to find something. Everything else is secondary, developmental, or accessory. If you step outside and candidly tell me you didn’t see so much as the local crow cawing its lungs out, then I’d be genuinely impressed.