Most Mysterious Senior Has An Investment Opportunity For You 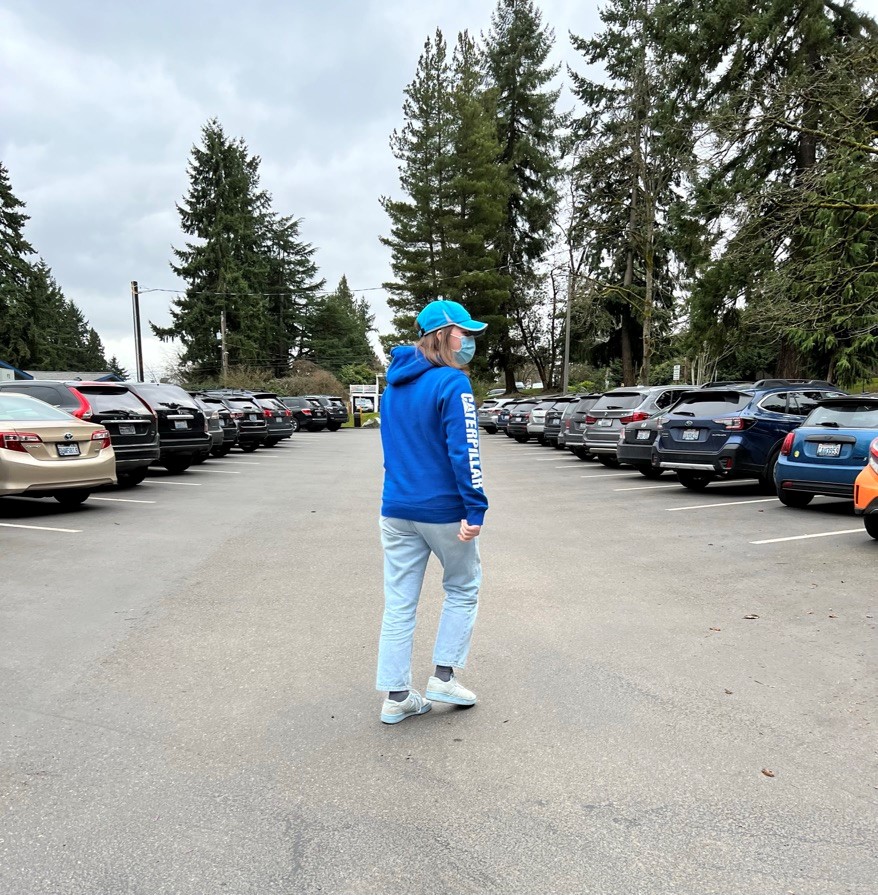 Have you seen the girl that wanders campus in transition glasses, looking for someone to make the “investment of a lifetime” into her white van fund? Chances are, you probably haven’t, given that Weronika K. was elected Lakeside’s Most Mysterious for the class of ’22 for the third time running this February. Now, in an exclusive Tatler interview, we give you an inside look into the infamous Weronika Kwiecinski’s world.

It’s a sunny afternoon when we meet Weronika in a classroom on the bottom floor of Bliss—to our surprise, she didn’t suggest the interview take place in the bell tower or one of the abandoned portables. As we pull out our laptops, Weronika calmly takes a seat at a chair, her hands resting plainly on her lap. At first glance, she doesn’t seem particularly mysterious, dressed in jeans and a Lakeside long-sleeve, but perhaps it’s the ubiquity of her outfit that allows her to hide her genius in plain sight.

Getting straight down to business, we ask Weronika whether she’s hiding any big secrets, and she responds in a deadpan worthy of Steve Carell, “I’m hiding several big secrets. Between four and seven, depending on what you consider big, because there’s also extra large and medium.” While this large figure is enough to make anyone mysterious, Weronika offers a different explanation for her mystery: transition glasses. “In 9th grade, I wore transition glasses… There was a problem with them where they would never go back to normal, so I’d just be wearing sunglasses all the time indoors.” At this point, we, the interviewers, start to howl with laughter as Weronika explains that people subconsciously connected the image of her with someone in suspicious sunglasses. Ultimately the glasses became too small, but the mental connection remained.

Over the years, Weronika’s name has been associated with more than just transition glasses. When we question her about the summer when Snapmap listed her location as North Korea and then later as Area 51, she keeps her cards close to her chest, saying, “I hate to disappoint, but without a lawyer or a representative from a certain branch of the government, I am not at liberty to speak on this subject.”

This wariness of the government points to another rumor that circles about Weronika. Not only did the senior class vote her “Most Mysterious,” but they also named her “Most likely to join the CIA” and “Most likely to destroy the world.” Naturally, we’re eager to ask Weronika what her spy name would be, should we ever find the need to contact her for a favor. Weronika considers it, then says nonchalantly “I would maybe just go with my name, it would be kind of a hiding-in-plain-sight kind of deal. No one would ever suspect it.” We’re already utterly stunned by her genius when she adds, “Or I could also do my name, but instead of a W, it would be an M—Meronika.” We, the interviewers, glance at each other in awe.

But her brilliance doesn’t stop there: Weronika has already tried her hand at a few different professions. “I worked at a certain burger company, but I will not be saying their name because they actually… I don’t want to say scammed me out of my money, but they did. So I don’t want to give them free promotion. I don’t want to let them build off of my name.” After her time at the fast-food restaurant, where, she notes, her co-workers found her “mysteriously” good at making milkshakes, Weronika now dreams of a future where she does not have to work at all. “Obviously the dream would be to just have no job and to just have a ton of money and do whatever I want with it.”

As of now though, Weronika chooses to focus on smaller goals such as attaining her dream car. If you’ve ever emailed Weronika before, you might have noticed that her Lakeside profile is that of a white van stock photo. According to her, “That white van is my dream car. I’m actually in the market for a car right now, and my dream one would be a white van.” She continues, with the aura of a visionary, “I feel like it would be so cool pulling into the Lakeside parking lot in a white van and opening the giant back door and taking out my bag.” Procuring this car isn’t just some lofty goal for Weronika—she has outlined a plan and budget to turn her dream into a reality. After searching the automobile market for a while, Weronika is now turning towards the Lakeside community for help, saying, “If anyone knows anyone selling a white van, please, please reach out. My budget is 500 dollars.” While she feels hopeful that someone will come forward, Weronika acknowledges that advertising this investment opportunity was much easier during remote learning when she could photoshop her Zoom backgrounds into billboard-like ads for all to see. But after some run-ins with teachers who deemed her backgrounds that read “Please Send Me Money” too distracting, Weronika hopes this article will help spread her message across campus once more.

As the clock nears two in the afternoon and the hallway fills with students, we ask Weronika two final questions. First, for the sake of our curious readers, where can she be found on campus? To this, Weronika replies that she loves to do her homework in the bushes behind the library because it’s peaceful and calm. She also appreciates “a daily walk around each of the parking lots,” where she lifts the hood and checks the engine of each car. Finally, when asked what message she would like to send to the student body, Weronika simply says, in a voice brimming with friendliness and confidence, “I have an investment opportunity for you, student body. For the small price of however much money you would like to donate, you can donate to me, and then with that money, I will buy my white van.” In return for this investment, she assures us that she’ll use her van to hand out candy to the students of Lakeside School.

With the questioning over, we, the interviewers, break character and start to giggle at each other. When we turn back to Weronika’s chair, it’s empty. She’s gone, shrouded once more in mystery, never to be seen again.