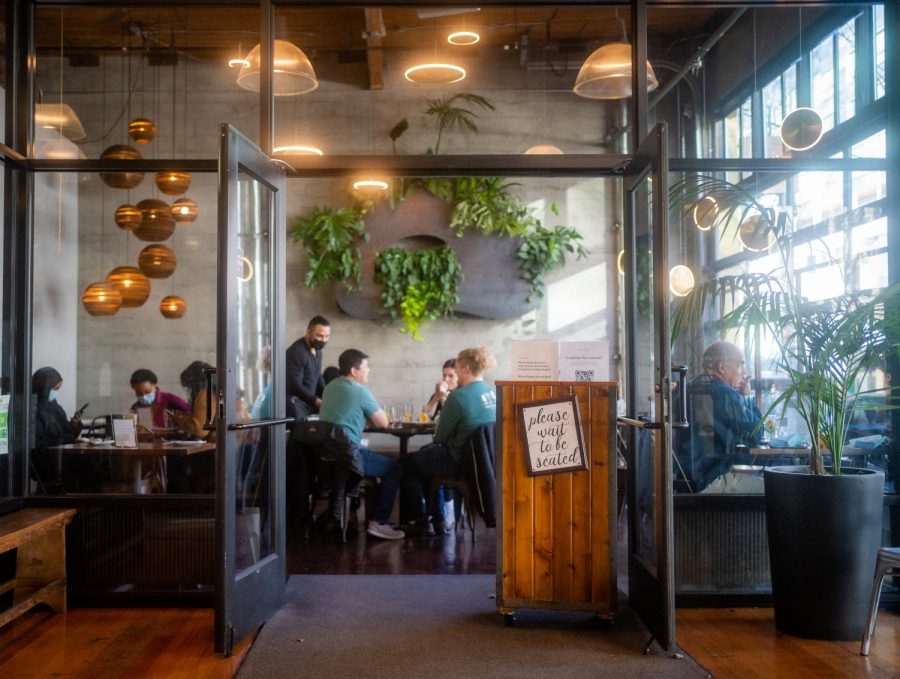 Vegan food is a topic that is often met by wide-ranging opinions, varying from “plant based diets are good for the environment” to “I like steak therefore I will not consider going vegan.” For the longest time, I shared the second opinion, but this was mainly due to the fact that I once ate a vegan bratwurst from a grocery store which destroyed my taste buds and appetite for at least a week. Regardless, after receiving a recommendation to try Plum Bistro, I decided to brave the storm and try vegan options at least once more.

Speaking of storms, when I arrived at Plum Bistro, it was pouring rain and freezing cold! Classic Seattle weather. Luckily, they had the heaters on, so the inside was warm and cozy for dining. The restaurant had a great ambiance that matched what I imagined a vegan restaurant would look like—lush, green plants growing in the corners and hanging from the walls, and wooden round light fixtures hanging from the ceiling. Seated at my corner table, my goal was to order dishes that could be compared to non-vegan ones to truly see how they would stack up against my favorites. To start I had the Buffalo Cauliflower Wings which were just like the classic Buffalo Wild Wings, but vegetable is used instead of chicken. They had juicy soft interiors with a crusty outside, and the spicy sauce resembled any other buffalo sauce. The large pieces of cauliflower looked like drumsticks at first glance and you could barely even notice a difference in flavor. It was a nearly perfect impersonation of the classic appetizer. I followed the cauliflower with my main dish: crispy Korean tofu. When it was served at the table, I had an immense olfactory reaction. The flavors were wafting and pungent but did not overwhelm me. The tofu was seared to a perfect crisp and had a sweet/sour glaze to it. Alongside it was fried rice, sauteed bok choy, and kimchi, which were all flavorful and complemented each other nicely. The meal was fantastic; I highly recommend!

For a grand finale, I had classic American cheesecake (though I’m not entirely sure how they made a vegan dessert that is centered around cheese). Nevertheless, the Citrus Lime Cheesecake was quite nice and was a fresh take on a very rich dessert. The cake itself was really enjoyable; it was comparable to a key lime pie flavor and displayed the richness and texture of classic cheesecake. On the other hand the graham cracker crust was subpar. It was made using gluten-free graham crackers which had a noticeable effect on the flavor. But the main issue was that the crust was soft and almost mushy. It hardly held a strong form and there was no satisfactory crunch. I found myself abandoning the crust and simply digging into the actual cake.

All in all, Plum Bistro exceeded my expectations for a fully vegan restaurant and had surprising depth to its menu. They didn’t have limited items in each section, moreover, there was immense variety. From Banh Mis and Korean Tofu to American Mushroom Burgers, there are plenty of opportunities for foodies to try vegan options and decide whether it’s worth the change or not.