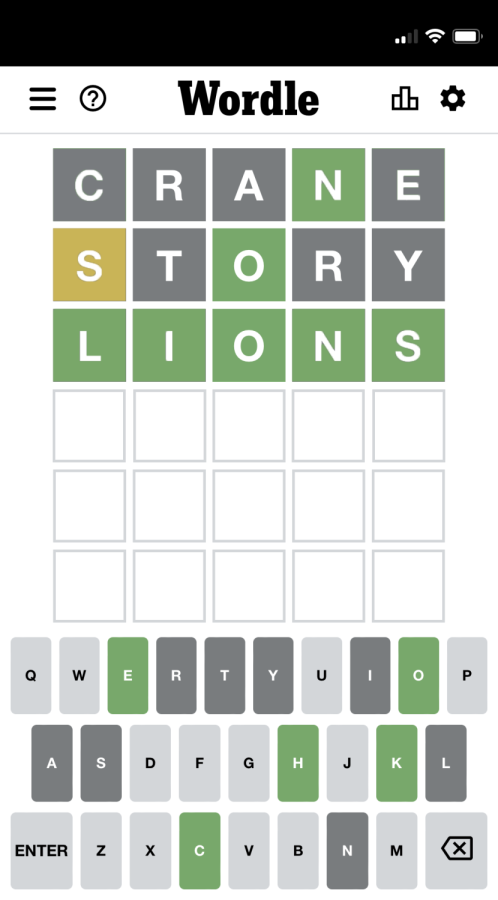 With millions of users and over two hundred versions, Wordle has taken the world by storm. Has this internet sensation reached Lakeside students, or is it just another one-hit wonder?

From its launch in late October of 2021, Wordle’s initial 90 players has exponentially increased by approximately 35,000%, reaching millions of players from all over the globe. At Lakeside, 86% of Tatler poll respondents have played Wordle at least once, and of those 85 students, 51 play regularly. Many Lakeside students report playing Wordle almost every day. To play Wordle, users have six tries to guess a five-letter mystery word. After each guess, the correct letters in the correct place are revealed in green coloring, the correct letters in the wrong place are revealed in yellow coloring, and the remaining letters stay gray. On average, Lakesiders have reported guessing the daily Wordle after approximately three tries. If Wordle is not challenging enough for Lakesiders, there is double Wordle (Dordle) and quadruple Wordle (Quordle). The game has also been translated in approximately 350 different languages, ranging from Portuguese to Hebrew. Some of these language-specific Wordles even have themes such as Wizard Wordle, for Harry Potter fanatics, Lordle of the Rings, for students reading Lord of the Rings, or Sweardle, for people wanting to test their knowledge of swear words. Other Wordles such as Old Norse Wordle, are more specifically geared to select populations such as scholars interested in reviving the medieval languages of Norway and Iceland.

One of Wordle’s many benefits is being able to practice your foreign language skills. Lakeside students have reported playing Worlde in multiple foreign languages including: Romanian, Spanish, and French. Other Wordle extensions commonly played by Lakesiders include: Lewdle, Wordle Archive, Absurdle, Chessle, Taylordle, Globle, Worldle, Primel, and Nerdle. Wordle Archive and Lewdle are similar to Wordle, while others like Absurdle take an opposite approach, altering the mystery word as the user is guessing. Absurdle and Lewdle are some of Emily D. ’23’s favorites. Landi J. ’23 likes Quordle and Wordle Archive, because “if you have not gotten enough from the Wordle of the day, you can play past Wordles”. Sephina P. ’24 enjoys playing Spanish Wordle, Dordle, and Nerdle. Taylordle is a great game for Taylor Swift fanatics, Chessle for chess enthusiasts, and Globle/Worldle for geography aficionados.

From the various renditions of Wordle, aside from the original Wordle game, Nerdle is the second most popular puzzle in the Lakeside community. This mathematical guessing game tests users computational skills, as players try to guess an eight-character expression in six chances. This mathematical rendition is also a favorite in the computer science department at Lakeside. Another great alternative to Nerdle is Primel, where users must guess the mystery five-digit prime number in five guesses. This game is a bit easier compared to Nerdle, and can be a great starter for the day. A good trick when playing Primel is guessing a number that ends in seven.

When the New York Times purchased Wordle in late January from Josh Wardle, the most obvious changes were the font style, logo, and URL. However, according to Emily , the New York Times purchasing Wordle, “did make a difference”. She finds that “there is a tangible difference in the word choice. It is not a random word. It seems more calculated”. Many students also find the new words more difficult, contradicting The New York Times affirmation that the Wordle word dictionary has not changed. Landi is also a bit hesitant about The Times’ new purchase, especially because other puzzles owned by the newspaper require subscription. She currently plays the mini crossword puzzles, but hopes that Wordle does not become as restrictive. Sephina echoed the same concerns, stating that she would not play Wordle if it was paid, because “there are so many other games out there”. Connor C. ’25, on the other hand, sees the New York Times purchasing Wordle as a great opportunity for the game, as the newspaper “already has a legendary crossword”. Even with Wordle’s new owner, Poppy H. ’23, emphatically remarks that “it is still fun!”

Starter words have been another hot topic at Lakeside, as some students always use their go-to word while others prefer spontaneously choosing their words. At Lakeside, the most popular starter-word is adieu, attributed to the viral tik tok. Poppy prefers choosing a starter word randomly each day, rather than reusing the same word, as creating the optimal starter word can take a long time. Emily agrees, as she believes Wordle should not be played like a “calculated game”. On the other hand, Landi uses go-to-starter words, but varies them each week. Sephina uses the starter word “tears” each week. She gets inspiration for her starter word from The Wheel of Fortune, where the final round letters are r, s, t, l, n, and e. Even with different starter tactics, these Lakesiders come to the unanimous conclusion that Wordle is best played in a nonchalant fashion, rather than with a computer algorithm.

According to Connor, the reason why Wordle is so alluring is because it is only released once per day, making it short, easy, and suspenseful. Connor finds that, “the best aspect of Wordle is getting to share your score with your friends, host impromptu competitions, socialize, etc. If it were a different word for everyone, then that aspect would disappear. If there were infinite words, the outcome would be the same.” Because players are all trying to guess the same word, there is a sense of universality when playing the game. This brief hiatus in a student’s busy day is a great way to relax without feeling unproductive. Now, there is the option to create your own Wordle for a friend. The platform is also appealing to the crowds due to its accessibility on the web, its clean design, and because it is ad-free. With Lakesider’s heavy workloads, Wordle can continue to be a five-minute destresser during students’ overwhelmingly spring semester.