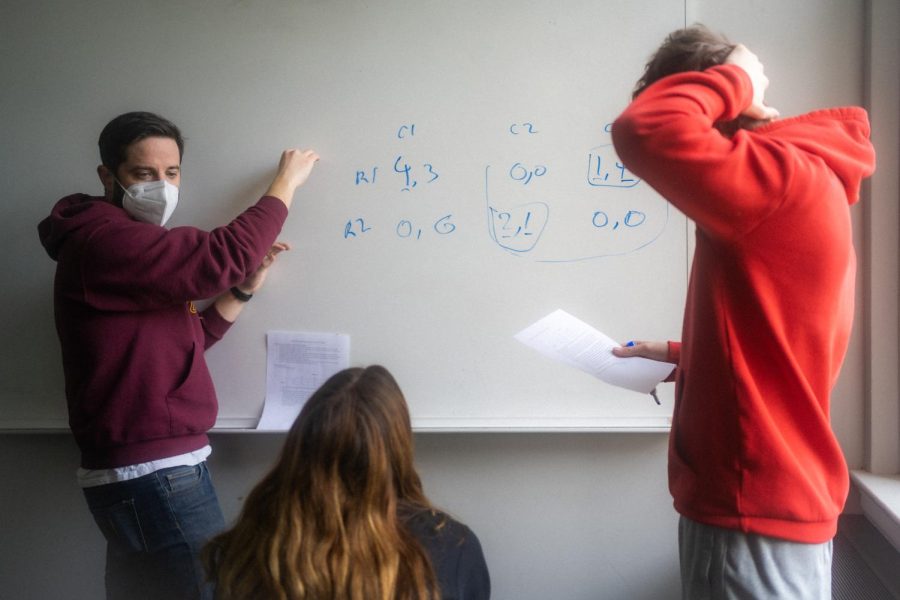 In the second week of March, you might notice that all of the history teachers will vanish from the Lakeside campus for the better part of the week. No, they won’t be going on a time machine journey to uncover the truth about the lost colony of Roanoke, but they will be on an off-campus retreat. For four days extending into the weekend, these teachers will meet to set the history curriculum on a new path for the years to come.

The current push to redesign the curriculum began during the 2020-2021 school year, although the idea of a complete redesign had been considered in years prior. In addition, the existing curriculum has been revised constantly throughout the past few years. According to Department Head Mr. Nau, many of the goals for revamping the curriculum came from community activism. “There are a lot of needs and asks from the community that have, if not emerged in recent years, certainly grown in recent years,” he says, particularly during and after the summer of 2020. In the Fall of 2020, a group of alumni wrote a letter to the school detailing changes they believe the school should make in terms of diversity, equity, and inclusion. On the topic of the curriculum, they wrote, “Students at Lakeside should learn that an intersectional approach is the only way to truly understand and address injustices that are themselves inherently intersectional.” They then suggested numerous changes to the current curriculum in all subjects. The history curriculum redesign will take into account some of the letter’s recommendations, as well as address ongoing student concerns about workload. In addition, Mr. Nau says that there are many “artifacts” in the curriculum that predate anyone currently teaching in the history department. There might be “a project that someone made 10 years ago that we’ve tweaked a lot, but it’s still the same project.” He says that the decision to completely redesign the curriculum came from the realization that the impetus for change is at a point where the department “can’t just make tweaks and adjustments,” they need to have a large-scale overhaul.

After the four-day retreat, teachers will not yet have full plans for the lessons and projects of each new course, but they will leave with “marching orders” for future work and some core concepts they want to build into each class. They will discuss how to include anti-racism as a core component of each course and how to include greater representation of other identity groups throughout history. “When it comes to race and anti-racism, it’s never going to be enough to just add things on,” says Mr. Nau. “It needs to be incorporated into everything that’s happening, all the time, from the very beginning.” In response to a review of the history curriculum by external history professors (during the 2018-2019 school year) that concluded that Lakeside needs to make “civic competence/engagement more active and visible throughout the curriculum,” the new classes will include discussions of current events and engagement in the political system. Another topic of the retreat is a reevaluation of the project-based learning model introduced in 2014, to determine if the model is achieving what it was intended to achieve.

In the Tatler Poll, many students expressed a desire to include more uplifting histories and positive representations of minority or marginalized groups—“We need more positive Black history,” one student said. “Black history is so, so much more than just slavery.” Speaking about the new Activism and Resistance course, Mr. Nau says, “The orientation of that class is in response to that feedback. It’s feedback that we’ve heard before, and it’s apt.” As a teacher of Genocide in the Modern World, he believes in the importance of recognizing the disheartening history of the past: “It’s an act of resistance to confront it, to face it, to acknowledge it.” At the same time, if students only see their identity represented in stories of oppression, the curriculum is problematic, he says. In that way, a core challenge in designing the new curriculum is ensuring that every student sees success stories that they can identify with without brushing over any stories that are important to bear witness to.

While the retreat only includes Upper School history faculty, the decisions they make coming out of the retreat will incorporate input from students and the administration. The administration has been and will continue to be involved as the project requires administrative approval, and the history department is also working on a survey to collect student feedback about the current curriculum and the direction in which students believe it should go. Parent feedback is not being solicited directly. The department will also consider community input such as the 2020 letter. In the Tatler Poll, several students expressed a desire to have the voices of minority/marginalized groups strongly represented in the curriculum design process; one suggested talking to affinity and alliance groups.