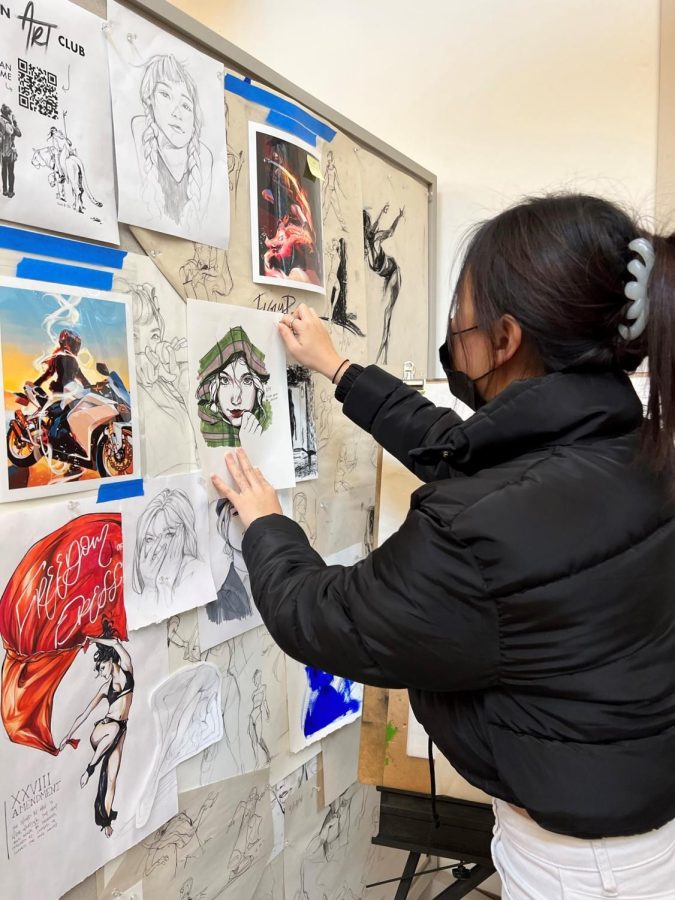 Much like the sibling article in this issue on content creators, professional art at Lakeside is a topic not often covered despite the wealth of resources and stress on the broad importance of art in the lives of high school students. Also like content creation, the accessibility of the publishing and potential monetization of art makes the barrier of entry low enough for high school students to vault over; that is not to say it is necessarily easy, moreso that art being an intrinsic part of the human experience it is one anyone can do on a scale beyond personal fulfillment.

Further, the realm of making money from selling art is one nebulous in general due to social stigmas of the “starving artist,” confusing in the many ways in which the field has evolved with the digital age, and deeply engrained into the modern generation’s online experience such that I was curious to find even a single person at Lakeside making money off of commissions, and impossible to believe that such a person could not exist. And lo and behold I was right.

(Quick side-note, though there is significant overlap between content creation and professional artistry to the point of it being random arbitration more than anything, for the purpose of this article content creators prioritize that – the publishing of content – while professional artists use publishing as a means to find work. No devaluing of one over the other is meant)

Elissa M. ’22, stationed on wavylinesem.com and @wavylinesem on Instagram, runs an art business, creating personal art and taking client and job commissions. Though she started the social media account four years ago, and started taking art commissions roughly a year in, she only solidified it into business when she started making a brand for herself, published her website and “opened up shop.” Currently, her social media remains the main vector by which she has found clients and been offered jobs, none of which or who know her age (though, for some reason, they always assume it to be 24).

Likely the most influential pieces she did were an artistic commission and personal piece, respectively.

The first was a commission two years ago from the German author Sarah Sprinz, who commissioned three illustrations of her main characters from three different books, which was used on postcards being packaged with an exclusive run of her books. Being one of her first professional commissions, she says “it was a really big starting point to a lot of other similar commercial work I’ve done because she is an author with a pretty big audience,” from which “word of mouth really got around because I got a lot of other requests from other similar authors who wanted me to do their characters in a very similar spiel.” The niche is specific: UK, YA realistic fiction writers, but it opened up the door and pushed her to figure out “how to make myself more professional, create terms and conditions, how much to charge for commercial work because you were also paying for the rights to use the art.”

On a non-business side she cites a three-piece series of portraits from 2018 to 2019, pieces dedicated to pride and the LGBTQI+ community. “At the time I had a lot of friends who were coming out and I wanted to support them in my own way,” as well as wanting to support the community at large as she was learning more about it. She didn’t expect the pieces, each one portraying a girl with a pride flag integrated in some way, to have “anything special come out of them, but they really blew up … the official Pride account on Instagram, @pride, reposted it.” To this day it is her most famous art, and she cites its personal importance as being influential in its own way.

Due to the time since these pieces, however, she does say these pieces are not her most favorite works. That title often shifts with each most recent work, as she has “been focusing on trying to improve on conveying a story and telling emotions through my work,” also aided by study of her current favorite artist Pascal Campion. Currently she places “Cloud 9” as her favorite work, currently on display at the Pigott Arts Center, as it was “created in the spirit of Thanksgiving but it celebrates a personal experience I’ve had and a nice feeling and I think it conveys those pretty well.”

Which I suppose transitions nicely into the next topic at hand, being the future of her career and/or brand. In the short term, with senior spring approaching and college applications in the past, she is excited to start spending more time with getting back into art and business, but something she has increasingly thought about is that “I’m still pretty young, and I am privileged to be in a place where I don’t have to support myself monetarily yet, so I want to focus on building my skillset.” Specifically she is focusing on “learning more software to help me in the process such as Photoshop. Lakesiders have access to Photoshop, I have it, but I haven’t sat down and taken the time to really learn it even though it’s very powerful and an industry standard.” More generally, she looks to “be able to create work that more closely resembles what I have in my head, being something that “artists want to do, to create a picture of what they have in their head, but to get there is very hard.”

Of course she aims to continue growing her audience, “though that’s really hard on Instagram with its algorithm right now,” but also especially with getting more involved with the Seattle arts scene; particularly, she wants to meet more local artists and attend local art fairs, “not just go to them but table at one, either my own table or shadowing an artist that’s there.” She does note that she aims to eventually explore beyond the Seattle area, a prospect aided by whatever college she chooses to go to and the fact that her “artwork and presence is … much more grounded in the internet sphere.”

Elissa’s personal journey was planned in that she put in the work to succeed, but she “did it because it seemed like it was time to do so, my job came without me having to look for it, necessarily … I didn’t work on it like a full-time artist would, in a sense,” – the website, for example, was moreso a location for people to get information than to attract clients – “That is not a path that will happen for a lot of people.” She adds that “If I were to do this again, I would have that plan and that goal because then I would have been able to make more specific, intentional steps toward achieving that and follow more of a straight line.” Leading into advice, she emphasizes finding your personal style, listening to yourself when considering artistic growth and when to share art, and to combat imposter syndrome – after all, there is “no good definition of ‘good art.’” Her main message however, from personal experience, is “don’t sit around for these things to happen to you like I did. If you want a job, email people to see if they’re interested, if you want a following figure out what makes people come to you and what about your work makes it valuable.” Most importantly, even if you shouldn’t expect an easy trajectory, it is “definitely worth it.”