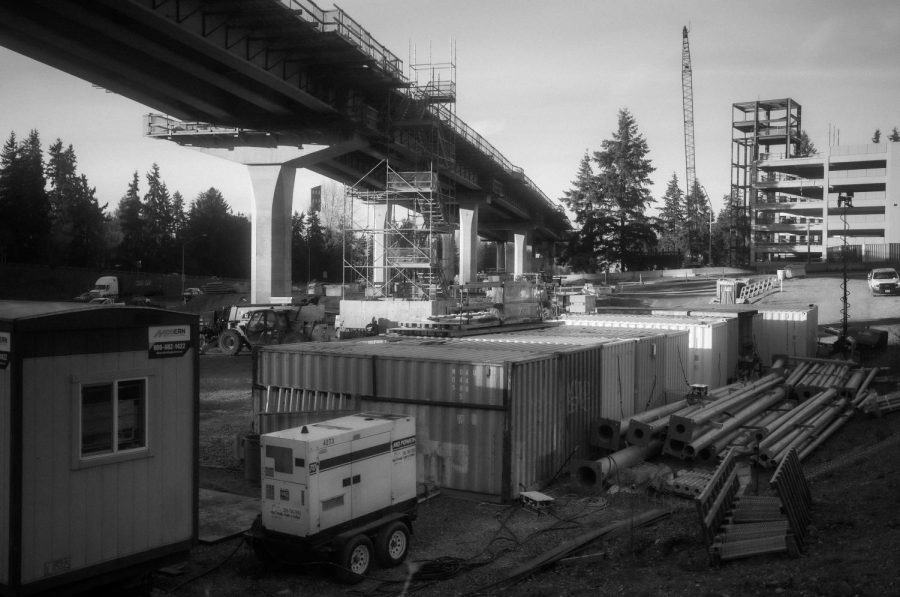 This haphazard pile of metal poles and concrete blocks will soon be cutting morning commutes into a fraction of what it once was (David C. '22)

Beside the northeast corner of the interchange between I-5 and NE 145th St. is a fenced-off field of dirt, gravel, scaffolding, and large metal storage boxes. However, the site’s cluttered appearance belies its significance—for Lakesiders, what is now a barren field of gravel is set to become their closest light rail station: Shoreline South, opening in 2024.

For students living close to existing light rail stations (which only extend to Northgate), the expansion could greatly reduce commute time; it would take 17 minutes to travel from the Shoreline South station to downtown Seattle on the main north-south line, according to SoundTransit. However, the location of the light rail station would necessitate crossing I-5 to get to Lakeside. Fortunately, several upcoming projects aim to make this area safer for pedestrians and bicyclists.

The walk from the future station’s site to Lakeside currently forces pedestrians to walk on narrow sidewalks right next to noisy vehicles driving well above the speed limit. The road is even legally designated as a state highway. In fact, its closest intersections to Lakeside—those at Meridian Avenue, First Avenue, I-5 Southbound, and Fifth Avenue—had five collisions combined that involved pedestrians and/or bicyclists between 2010 and 2014. Soon after the light rail station opens, however, two of these intersections (those on either side of I-5) will be changed from traffic signals to roundabouts. The City of Shoreline says that this will cut traffic delays at the intersections down to 31 seconds as opposed to three and a half minutes with traffic signals. The roundabouts also make it safer to walk and bike because cars slow down as they travel through them. In addition, the city will also build a completely car-free bridge directly from the station across I-5.

The pedestrian bridge project has been in the pipeline for quite some time, says City of Shoreline Project Manager Lea Bonebrake, beginning with a feasibility study that was completed in 2017. He says that the bridge’s design was complicated by the coordination needed between different community groups. “This project impacts the three churches on the west side, crosses over I-5 (controlled by WSDOT) and lands in the middle of an active construction zone currently held by SoundTransit.” Through outreach events, the city found that local residents most desired improved pedestrian travel and a safer environment for walkers in the area around the station, yet “each stakeholder has a different set of requirements and approvals that need to be met before the project can move forward.” Interestingly, one point of community feedback the city acted on was the preservation of trees. “Our original design showed the removal of those trees,” Bonebrake says. “However, recognizing the importance of those trees to the churches and the community, we were able to come up with a design alternative that allowed us to maintain them.”

The project could make commutes easier for bus riders as well. On the 987 bus, for example, many students are forced to stand for hours because of a lack of sitting space, says Yordanos Y. ’24. “The normal commute for me is about two hours long, and I have to wake up really early every day.” The light rail expansion has the potential to allow for easier, faster commutes and fewer crowded Metro buses, as the 987’s route follows that of the light rail. The project, Yordanos says, “will allow me to get more sleep as well as get to school much faster.”

But the station will only be as good as the connections to it—which is why these pedestrian and bike-oriented projects are a necessary part of the light rail “package.” While many current Lakesiders might not be able to experience the benefits of light rail and pedestrian-friendly streets before they graduate, their effect will be felt on campus for years to come.