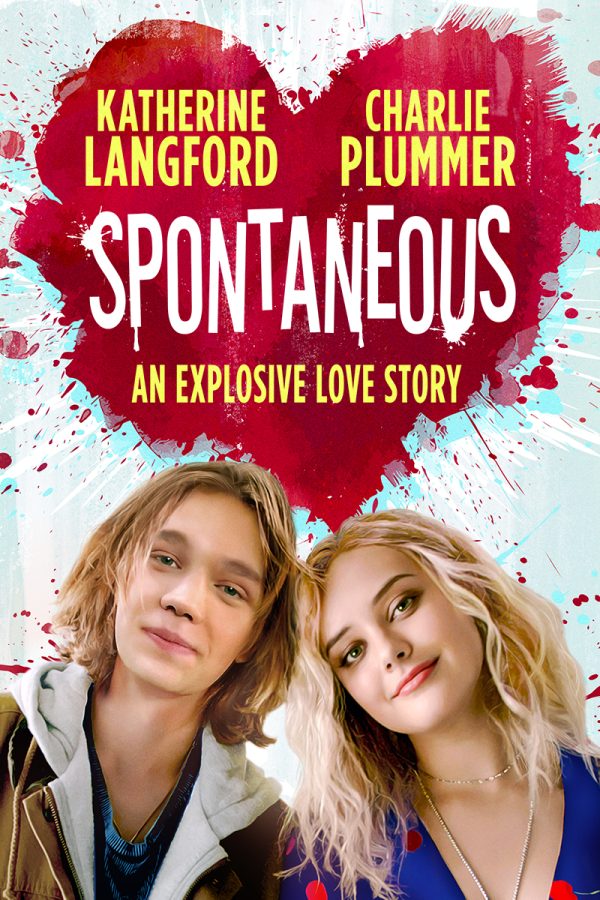 Ah, Valentine’s Day. Sending construction paper hearts to your loved ones, gorging yourself on chocolate galore… and exploding teenagers?!

This February, I thought that I might review a romance movie that strays just a bit from typical romance tropes. Spontaneous, directed by the upcoming Brian Duffield and based on Aaron Starmer’s book of the same name, was the perfect movie for the job. It tells the story of the pitiful senior class of Covington High, in which students start – you guessed it – spontaneously combusting. And in spite of it all, one girl finds love and decides to live for today when tomorrow is never guaranteed.

Sounds like a doable (absurd, but doable) premise, right? Going into the movie, I had a few different expectations, especially because of the full range of reviews I had already seen. I thought the movie would either embrace the zaniness of its plot and become a fun romp where the students try to figure out what the heck is happening and fall in love as they do so, or the movie would genuinely try to tell a good, heartfelt story and fail spectacularly, while being good in a bad way, like Twilight.

I have to say, I was very disappointed.

This movie was a bore to get through. I paused quite a few times to consider doing a conventional and popular romance movie, just so that I wouldn’t have to sit through the rest of this dull story.

Though there are many, many problems, the biggest one by far was the god forsaken plot; as in, the plot where nothing happens! They don’t even try to muster up an explanation for why students were exploding; they ignore the entire conflict of the movie to put an “inspiring” montage at the end with stock footage and a poorly animated dinosaur (no, I’m not kidding). The movie might have purposely done this to push their message of “Life’s weird, but that’s okay,” but I don’t think it came through the way they wanted to. It might have worked for other movies, where you get caught up in the plot and forget about the unexplained, but for a story about exploding teenagers, it falls short when most people are waiting for an explanation for the crazy premise throughout the movie. Basically, the entire movie goes: kid explodes, romance scene between Main Character and Love Interest. Repeat 50 million times before Love Interest explodes (I said spoiler warning, right?) and then half an hour of Main Character grieving. One bland conversation with Love Interest’s mom later, Main Character is completely fine and ready to take on the world, roll credits. And that’s a 100 minute run time.

Onto the 99 other problems. How about the awful, awful pacing? The interesting scenes where kids are dying for no reason are rushed through just so that really awkward romance scenes can be drawn out to the max. And speaking of the romance, one of the most important aspects of the movie… it varied. The director’s vision really felt most visible when the romance came on. It was heartwarming, with the characters just being awkward, lovestruck teenagers together. Unfortunately, these scenes were always ruined by at least one of the characters making an inappropriate or outlandish joke at some point (which didn’t even have the redeeming factor of being funny). I don’t think I’ve emphasized how much I dislike the characters enough. Main girl (whose name I should probably say by now; it’s Mara) can be stubborn and rude, which gets annoying quickly. She even gets angry at the scientists who are trying to stop her and her classmates from blowing up and starts an uprising with her class, which just leads to yet another teenager exploding. Additionally, when she’s grieving for Love Interest (Dylan, who’s personality trait is being the human equivalent of white bread – if white bread had stalker tendencies), she lashes out, damages property, and insults her parents. And instead of getting Mara professional help to cope with her trauma, her parents do little to nothing to stop it, and even endorse it in some ways. What I’m getting from this is that the best way to deal with loss is to shut everyone out and act up until you eventually move on; not the best message.

And lastly, the crown jewel of my gripes: the horrible, insulting comedy. Jokes that might have been good on paper were ruined by timing or delivery, and apparently this movie’s definition of dark humor is being offensive (but then again, I think that applies to far too many people). There are jokes about minorities and suicide that are definitely not okay and deemed “quirky” by other characters, and they are blown off way too many times. Even if you’re hurting other people “as a joke,” you’re still hurting other people. Amazingly, saying something’s a joke doesn’t erase its effects! Wow!

I will admit, there were a handful of funny scenes, but none were laugh out loud hilarious. I just sat there and thought, “Well, that was a good attempt at a joke.” It’s just so disappointing that a movie like this, that could have so easily been hilarious with its premise and plot, falls short in the comedy department (especially when you can see snippets of its potential here and there).

It’s probably been made obvious by now, but I don’t recommend this movie. I thought this movie might end up being a hidden gem, or at least enjoyable to laugh at, but I was let down; Spontaneous was a boring, sometimes angering failure of a movie, I’m sad to report. There were some good tidbits; the pacing started to fix itself before Dylan died, some of the romance was wholesome (despite the characters being unlikable), and the scene leading up to Dylan’s explosion, where students were combusting left and right, did a good job of inducing anxiety and uneasiness (despite going unexplained). Though they were good, these elements, alas, didn’t save this movie; maybe it’d be best for you and your Valentine to curl up with a more conventional romance movie this Valentine’s day.