Arts Calendar Special: Where to Take Your Date and Wow Them With Your Spectacular Intellect and Artistic Know-How 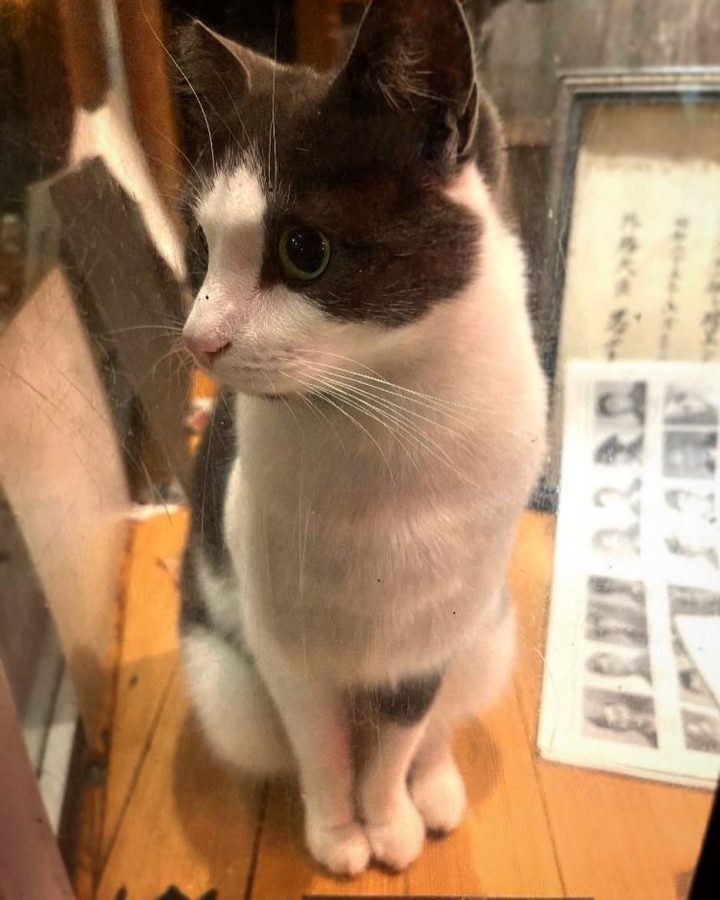 Panama Hotel's resident cat, Miu-Miu. She will show up exactly once in this article. (Yoon L. '23)

The movie date. The all-too-common trope wherein two hopeful youths sit together on a velvet seat in front of a silver screen and eat popcorn out of the same bucket, holding hands, etc. etc. Why, yes, I have in fact seen [*insert any serialized American comic strip ever*]. But really, what else is there to do? It’s not like you can just take your date to some artsy place in Seattle and do whatever it is that couples do on dates that is apparently different from “just hanging out.”

That is, of course, if you aren’t a coward.

That’s right, on today’s episode of “17-year-old who has no experience in romantic relationships, does not even very much enjoy romantic content, and does not plan to do either for at least a few more years offers romantic advice that they are woefully unequipped and underqualified to give,” I – and various anonymous Lakeside students – will be offering some Seattle-area arts events to go to with your boyfriend(s), girlfriend(s), or gender-nonspecific significant other(s) to impress them with your massive artistic intellect and refinement.

First, I’ll consult the venerated respondents of the Tatler Poll, known for such profound answers as “idk what this means,” “what does this mean, “whoa hi yoon,” and – my personal favorite – “furry convention.” You do you, I’m not one to judge but I have neither the authority nor the bravery to straight up put “take your date to the local furry convention” on something I and countless others will have indefinite access to. Yes, I realize I’m a coward. But if you do that, please let me know so I can personally congratulate you.

Moving on, let’s touch on the obvious: museums. The Frye Art Museum in First Hill is always a fantastic choice, an admission-free museum founded by Seattle natives Charles and Emma Frye. Wow your date with the Frye Salon, a packed-together wall of 232 19th and early 20th century German paintings that replicate the look of the private salon formerly located inside Charles and Emma Frye’s. Alternatively, show your immersion in the contemporary art scene with Boren Banner Series: Sadie Wechsler, a chance for regional artists to feature their work on the museum’s east facade, starring a new work inspired by the ecological history of the Frye’s First Hill neighborhood. Perhaps demonstrate your caring for nature and animals through Human Nature, Animal Culture: Selections from the Frye Art Museum Collection, focusing on portrayals of domesticated animals from the Frye Art Museum’s collection that examines how human-animal relations have changed over time, and to reflect on how art mediates relationships with animals more broadly. Perhaps take them to Art on the Mind: Ten Years of Creative Aging, a forefront in programming for people with dementia and care partners.

If you’re willing to splurge on the $9.99-for-students admission – or avoid it by going on February 25th – you can check out the Seattle Asian Art Museum. In addition to being a really intriguing museum with plenty of incredibly interesting historical artifacts, and a neat donut at the entrance, it is located in Volunteer Park, a noticeably cool place with cool trees and cool ducks. Additionally, it currently features works by internationally renowned artists Ai Weiwei and Do Ho Suh. For the former, make note of how he uses Chinese artistic forms in his sculptures to represent Chinese political and social issues as well as his political struggles against the CCP. For the latter, note the relation his work has with anti-monumentalism, and how they convey his life experiences, including the homes he has lived in and the people he has met.

On a related note, because I’m biased, you can check out the Wing Luke Museum in the international district! For $12.50 (with student ID), you can tour preserved buildings of pure, Seattleite Asian immigrant history, including a grocery store and living quarters/hotel (including a massive Mahjong table) in the East Kong Yick Building funded by 170 Chinese immigrants in 1910. Explore the Gerard Tsutakawa’s creation process for public sculptures and their impact on the area; the early effects of the uncertainty, fear, anti-Asian racism, and existing inequalities relating to the COVID-19 pandemic on the APA communities; stories of Burma/Myanmar including the military coup from February 2021; the history, culture, industry, psychology, and politics of APA beauty; the pan-Asian Pacific American immigrant and refugee experience; Filipino American history and identity; the traditions and values from South Asia and how they have evolved in the U.S.; the atrocities of the Khmer Rouge holocaust; and the life of Bruce Lee. Mix and match depending on how serious you want your visit to be.

Or, alternatively, any music concert. The Seattle Symphony at Benaroya Hall is reliable for showing just how sophisticated your music taste is (bonus points if you can actually pronounce the composer’s name. How do Camille Saint-Saens fans cope) because classical music is apparently always indicative of that. I mean, fair enough for me. If you’re looking for a more traditional concert I’d check out their Songs of the Earth concert on February 10th, 12th, and 13th, featuring George Walker’s offers introverted and deeply personal reflections on four spiritual melodies and a tribute to the memory of his grandmother, as well as long-time favorite Gustav Mahler’s Das Lied von der Erde inspired by Chinese poetry, for a night about the end of life because everybody’s needs a downer on Valentine’s Day. Sibelius One Untuxed on February 4th offers a halved (53 minutes), slightly less formal concert performing Finnish composer Jean Sibelius’ First Symphony, one full of Nordic vigor and towering inspiration. If you’re looking for something more fitting of the occasion, check out Grammy-winning pop artist Jim Brickman: Share The Love on February 13th and 14th.

Or, if you’d like something less… classical, you can check out the Hip Hop Orchestra Experience at the Edmonds Center for the Arts on February 10th. Hell, if you’re looking for a low-cost option with performance involved (seriously, I get that rent is expensive but $18-$80 is… a lot and probably the main drawback of music dates), you can check out Lakeside’s CIRCUS! Performances at 6 PM on 2/15-2/17 because I’ve been promised, multiple times, that it is cool.

One ever-popular response is Van Gogh: The Immersive Experience running Wednesday-Monday until February 26th because, well, it’s Van Gogh in full 360-degree Dutch digital glory. If that won’t wow you and your potential date, I see no hope.

These are just some of the more high-key options, but there are plenty at your disposal: the Panama Hotel and Tea House in downtown Seattle to grab some tea in an early 19th Century Imperial Japanese setting (beware the cat; the cat is nice until she isn’t), the first Thursday of February to get into the Seattle Art Museum without paying admission, the Pacific Northwest Ballet. For more low-key options, you can check out a library, a cafe, a food stand (Chung Chun Rice Dog in Seattle is a personal must), a restaurant, the various graffiti around Seattle, the Selfie Museum because that’s a thing, the Gum Wall if you’re willing to stand the petri dish of diseases surrounding you or, hell, take that movie date (safely if possible). Alternatively, take the smart option and completely disregard my advice, because I clearly have no idea what I’m doing.

Oh, and how could I forget, the magnum opus of all ideas to take on a rosy Valentine’s Day night as the moon rises on a starlit sky, city noises revving by at unspecified distances, rose petals floating in the breeze as music plays softly from bluetooth speakers. Inspired by the eloquent words of February 2022 Tatler Poll Respondent #135 at 1/10/2022 21:05:16, “fortnite travis [sic] Scott concert.”

Thank you for your service and wisdom, kind student.