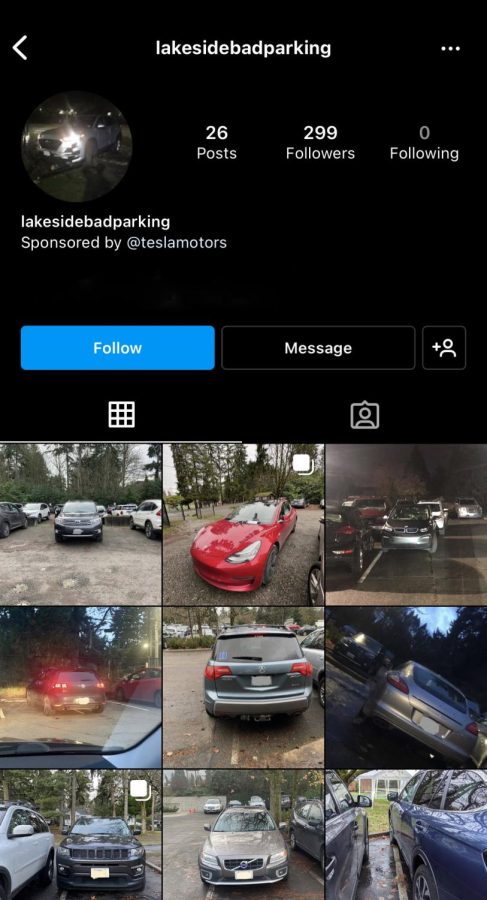 The group is aided by an army of anonymous informants, waiting to seize on the slightest misstep. Be careful—they have eyes everywhere. No, this isn’t a crime syndicate or the KGB, but @LakesideBadParking. The public Instagram account, where 300 followers see snapshots of Lakesiders with wheels over parking lines or up on curbs, is giving the student body an ominous sense of constant surveillance—and possibly changing Lakeside parking for the better.

The account was born, of course, from a parking mishap. “A group of people in my free period were talking about how bad everyone at Lakeside was at parking,” says account admin Toby Z. ’23, “Because one of our cars got dinged in Stimpson.” Inspired by a national trend—including neighbors such as @GHSPoopyParking (Garfield High School) and @IngrahamS—-Parking (Ingraham High School)—they created @LakesideBadParking.

Lakesiders send in pictures when they see bad parking, says Toby, so all the account admins have to do is blur license plates and post. The hardest part? “Easily picking captions,” he says. “We have a lot of arguments in our bad parking group chat.” The arguments pay off, with consistently clever entries such as “Bonk” (below two cars just inches apart in the Athletic Center lot) and “Double jeopardy” (for a picture of a senior’s car parked halfway between a handicap spot and a no-parking zone). “Sponsored by @TeslaMotors,” reads the account’s bio, giving it a uniquely Lakeside touch.

“No one has ever gotten mad,” says Ari G. ’23, one of five other account admins, and Lakesiders seem to take the whole thing in good fun. If it’s public shame, it’s a gentle sort: “It’s not targeted to anyone, and everyone is made anonymous…I think it’s more funny, and it also motivates people to park better,” he says.

Student reactions to being posted range from a classy “thanks <3” comment to a humble “i tried i tried” to a frantically typed defense—it was the fault of the next car over! The account doesn’t publish names, but Lakesiders cheerfully tag their friends in the comments when they recognize a car.

Not even parents are safe. Under one post, Charlie H. ’22 tagged his mother, presumably the culprit; seemingly not offended, she became the account’s latest follower. “My dad got posted on there,” recalls another senior, but lacking an Instagram account, the parent never saw it. That some of the bad parkers are in fact social media-less parents begs questions about the account’s mission to improve Lakeside parking.

Ari thinks it isn’t really about the student body: “Lakeside’s parking lots are the problem,” from the AAC lot’s notoriously tiny spots and tight angles to the borderless chaos of Stimson. Anyways, “high schoolers all generally tend to suck” at parking, he says. Maybe Lakesiders are, in this regard, perfectly ordinary.

For Toby, the account’s success has been a double-edged sword. “It’s a good thing because it’s improving the parking,” he says, “But it’s also a negative for us because we don’t have as much content.” His final message to Lakeside: park better, but be sure to snap a picture when your friends don’t.