An Emotionally Confused Review of West Side Story 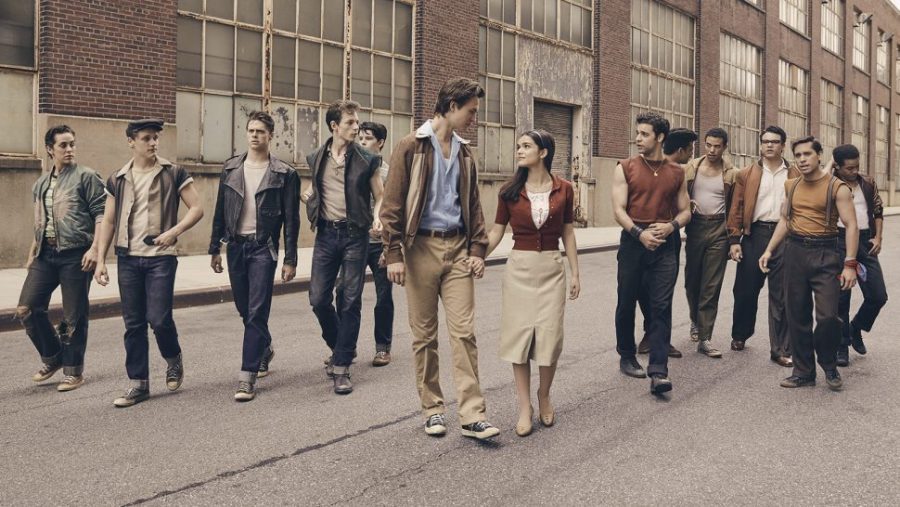 It’s safe to say that watching the 2021 remake of West Side Story was one of the strangest movie viewing experiences I’ve ever had. Definitely not bad, but not what I expected.

Based on Romeo and Juliet, West Side Story began as a Broadway production in 1957 and was released as a movie four years later. The story centers around two rival gangs, the Jets and the Sharks, who occupy the Upper West Side of Manhattan. The Sharks are made up of Puerto Rican immigrants, while the Jets are made of lower-class whites. Maria (our Juliet), whose brother is the leader of the Sharks, and Tony (our Romeo), an ex-member of the Jets, meet at a party and fall in love.

For the first two hours of this movie, I was amused by some of the more obnoxious dance numbers and tired of Maria saying “wait!” every time Tony started to walk away. I was so ready to write a disappointed review and be done with the whole thing… until the final scene. But let’s discuss how we got to that turning point first.

Probably the most significant improvement from the original movie were the casting choices. Initially, the main character Maria (who is supposed to be Puerto Rican) was played by white actress Natalie Wood, and many of the characters wore brownface and faked accents. In the new cast, all of the Puerto Rican characters were played by Latinx actors who speak fluent Spanish, like Rachel Zegler as Maria. There was also a trans character, “Anybodys,” added into this version, which was nice to see in a historical movie where queer characters are often neglected. He was played by nonbinary actor Iris Menas.

My favorite part by far was the design, specifically costumes. In traditional performances of Romeo and Juliet, rival families Montague and Capulet dress in red and blue, respectively. This color scheme in the costuming is beautifully incorporated into the movie, with those affiliated with the Sharks in warm colors (reds and yellows) and those affiliated with the Jets in colder grays and blues. The school mixer scene was a great example of this, providing a diverse array of looks that still fit in perfectly with the era and even hinted at character development. It’s all in the details; Anita (Maria’s friend and confidante) wears multiple dresses with different colored underskirts that only become visible when she dances. This is perhaps alluding to her character being more than what meets the eye, since Maria (and the audience) discovers much more about her character at the end of the movie. Maria’s white dress with a red belt evoked the idea of innocence with the whites, but quiet rebellion with the reds, especially with the red lipstick accompanying it. It also separates her from her family, who are all dressed head to toe in color.

Unfortunately, the writing was not up to par with the design. One of the cringiest parts of the movie is the obvious scriptedness behind every moment. Yes, I understand that it’s a musical with a lot of dance numbers, which makes it hard to incorporate into a film. But a movie like The Greatest Showman, for example, was able to capture the musical element without seeming like too much of a stretch. West Side Story, however, did not. Even in moments without singing or dancing, the dialogue was predictable and unoriginal. For example: “I’m a grownup now, I’m going to think for myself!” followed by a dramatic door slam. Or, “I want to be with you… forever.” Almost all of it was very shallow and didn’t allow for the audience to get to know the characters on a deeper level. It wasn’t a complete disaster, however; the best decision made about the script, like I mentioned before, was to have some parts spoken in Spanish without subtitles. Even though I didn’t understand what was being said, the acting and the English sprinkled in was enough to clue me into what was happening, and it added a layer of character that wasn’t as present in the rest of the film.

Now the emotional rollercoaster begins. Similar to its Shakespearean counterpart, Tony is told that Maria has been shot by a side character affiliated with the Sharks, Chino. He’s so heartbroken that he runs into the street, shouting that Chino should kill him too. As Maria rounds a corner and sees Tony, Chino steps out and shoots him in front of her. Eventually, Maria takes the gun and, not knowing how many bullets were in it, asks him (referring to the gang members on both sides), “How many can I kill and still have one left for me?”

I’d be lying if I said I wasn’t one to cry at movies  – I cried at Toy Story 3 when Andy went to college and left the toys behind. That being said, if you had asked me halfway through West Side Story if I was invested in the characters and the story, I probably would have said no. That’s what I thought until the last fifteen minutes or so, when I sat in the second row of the theater sobbing and trying to console myself with Butterfinger Bites (the superior movie snack — please sponsor me). Some perfect storm of camera angles, somber music, and acting took this previously cliche movie to one of the most beautifully tragic cinematic moments I’ve experienced. Again, the costuming plays into the storyline, with Maria’s blue dress signifying her devotion to Tony. With the entire set bathed in blue light and shadows, a scene of destruction taking place in wrecked houses, the actors’ emotion seems to seep through the screen. I can’t think of a better way to do it justice than to say that it’s the kind of scene that makes you want to be in love. Stephen Spielberg certainly knows how to direct a movie, and if I hadn’t been convinced of it before, I was in that moment.

Yes, I would recommend this movie. You’ll sit through some annoying parts, but it’s worth it just for those last fifteen minutes. Don’t wear mascara, don’t invite a friend, and have tissues and comfort snacks at the ready. On a cold day this winter, curl up in a comfortable spot and watch West Side Story.