Deltarune Chapter 1 Is Really Good And You Should Play It 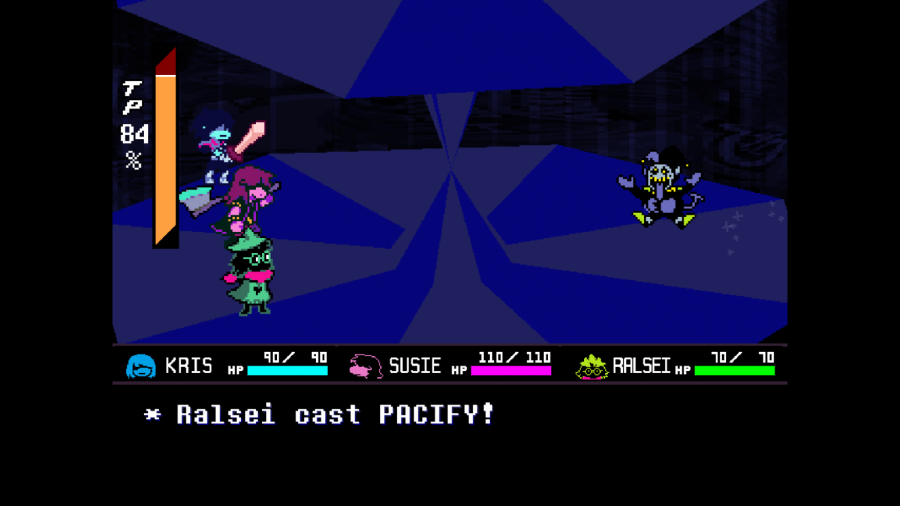 I feel like saying “Toby Fox is good videogame man” is kind of self-explanatory at this point. The meteoric rise of this small white dog is certainly something to behold, a debut indie project called Undertale blossoming into one of the most impactful properties on the internet, for all of its many stratospheric ups and incredibly depraved downs. Seriously, I’m fortunate enough to never personally experience the latter but just being semi-conscious on the internet is like walking through the fields of eastern France post-WW1.

That’s not to put down the accomplishments of Undertale and its legendary creator/composer, the man who went from small indie developer to small indie developer who won a 1v1 Smash Bros match against Masahiro Sakurai, landed a character into Super Smash Bros, snuck Homestuck fanfic music into an official Pokemon title, and also created Sans the Funny Skeleton Man.

But I’m not here to talk about Undertale, I’m here to review its younger cousin, Deltarune. Now, Toby Fox has specifically stated that Deltarune is made for people who played Undertale, but knowing the story and not the gameplay offers a chance for a fresh look in terms of gameplay. Which is the crux of my review. And I will play Undertale someday, mark my words.

Deltarune is a retro-stylized top-down role-playing game, releasing in seven chapters from 2018 to the indeterminate future. Chapter 1 follows Kris, the only human in Hometown, and adoptee of the Dreemur family (Toriel and Asgore, ex-wife and ex-husband respectively, and their son Asriel, off at college). Kris is accompanied by Susie, a troubled bully, and Ralsei, a “Darkner”, with whom they are destined to save the world by traversing a Dark World and sealing the Dark Fountain. The trio are opposed by the King, whose son, Lancer, is also there. Lancer’s doing his best.

I will admit that I wasn’t impressed upon first viewing the story. Compared to Undertale’s more refined drama, Deltarune started light and almost cheesy. I came around to it once taking into account that it is only the beginning of the story, whereas Undertale came as a full package. Also, the main characters are teenagers, so I will concede that their dialogue would be rough around the edges. In the end, all of the characters are at least likable and have infinite room for development; Susie won me over as she warmed up to Lancer, Ralsei is precious and adorable, and Lancer is both an impeccable comic relief and decent emotional centerweight. The dialogue and humor is also excellent; I chuckled constantly with the off-kilter interactions and immaculate comedic timing. I also appreciated the subtle characterizations: citizens of Hometown imply that Kris is usually more of a reserved prankster contrasting their unusual sincerity in Chapter 1, and Susie’s implied to be less well-off considering her holey, ill-fitting clothes, poor eating habits, lack of a visible residence, and general delinquency.

Let’s touch on the art style. There are some cases where I think it disappoints — the Card Castle feels barren and the beginning cutscene when Kris and Toriel get in their car is almost goofy — but the game mostly makes full use of the retro style. The character designs are top-notch and their animations are appropriately simple or satisfyingly smooth. There are also plenty of incredible in-jokes, such as one of Ralsei’s talk sprites and “the original      Starwalker”, an easter-egg character, both playing off Toby Fox’s affinity for MS Paint concept art. Unrelatedly, a subtle touch is that all of the characters have walk cycle animations aside from Lancer, who just slides around. Iconic.

The music speaks for itself. The soundtrack is incredible all around, a given for a Toby Fox production. I particularly love the use of leitmotif, including newcomers like “Don’t Forget” that further the story and legacies from Undertale like “Home” to stoke nostalgia when appropriate. The themes for the respective characters and levels are excellent and absolute ear-worms, which is good as they repeat until an encounter or level ends.

The gameplay is separated into turn-based encounters and puzzles. Puzzles include more traditional forms (i.e. matching card suits, moving blocks to targets) and traversing the environment to avoid obstacles. They’re fun to complete and come with entertaining character moments, but the highlights are the encounters. Like any turn-based game, your turn has you select actions: FIGHT, ACT, ITEM, SPARE, DEFEND, and MAGIC. The enemy’s turn puts Kris’ SOUL on the Bullet Board, where you control a heart-shaped SOUL and dodge projectiles; grazing projectiles increases Tension Points (TP) – also earned by DEFENDing and FIGHTing – used for MAGIC. You can win by draining an enemy’s Hit Points with FIGHT, Tiring – FIGHT or ACT – and Pacifying with MAGIC, or meeting a Spare condition with ACT and then using SPARE. This system, combined with excellent character designs and the battle theme “Rude Buster”, is immediately rewarding and a superb combination of turn-based RPG systems and Toby Fox’s outstanding bullet hell gameplay. It also offers room for varied approaches and optimization, upping replayability. The enemy variety helps, each having unique attacks and Spare conditions that double as premium outlets for Toby Fox’s off-kilter humor.

Then there’s Deltarune’s vaunted secret boss. I may be an outlier here, but I loved the Jevil bossfight. Maybe it’s because I already had a vague idea of the fight due to being spoiled to hell and back, but I might even go so far as to say it was my favorite part of the entire game — the joy of finally playing this vaunted boss fight after months of anticipation, the dopamine in barely avoiding the truckloads of pellets thrown from every angle and hearing the gratifying “tick” of TP increasing, the satisfaction of progressing from each attack to the next, the tension of just barely surviving with Ralsei to finish the fight — I couldn’t help but go through each attempt with a smile on my face. And again, it’s not exactly controversial to say that Toby Fox makes excellent music, but something about the head-bopping playfulness of Jevil’s theme “THE WORLD REVOLVING” is infectious to the nth degree. The music alone probably would have convinced me to keep going back.

One final notable aspect of the game is the integration of easter eggs. I can’t possibly cover everything (the YouTube videos doing so are hours long), but among them are plentiful callbacks to Undertale, such as the “garbage noise” from your cell phone in the Dark World and the ambient music for Hometown’s south-end bunker — once sped up by 666% — being the same found when uncovering the enigmatic W.D. Gaster’s 17th experiment in Undertale.

There is a massive elephant in the room, however, in regards to Deltarune: it revolves around the theme of “your choices don’t matter”, contrasting Undertale where the opposite is true. This message is aided by Kris. In Undertale, Frisk is an empty slate for the player to project their identity, personality, and history on. Contrastingly, Kris is unarguably a historied nonbinary human teenager that probably doesn’t enjoy being controlled considering they rip out their SOUL — your control over them — in the final cutscene. As the player you are complicit with the subjugation of Kris’ bodily autonomy. The only way to be truly blameless is to put the game down, but then you face the philosophical matter of whether you prioritize the well-being of a fictional character or your own entertainment. I suppose I chose the latter. But unlike Undertale, Deltarune makes it abundantly clear: the outcome is always the same, so even if you do everything “right” — defeat all enemies peacefully and only choose positive interactions — your invasion of Kris’ self still remains. I find this message absolutely fascinating, and cannot wait to see how it all comes together in the finished product.

I enjoyed Deltarune Chapter 1 immensely. Although I wasn’t too impressed by the story, the foreshadowing, characters, and foundation of the overarching plot has me intrigued to see where Fox and Co. go next. I full-heartedly encourage everyone and anyone to pick up the game — the first two chapters are free on Steam and Itch.io so you have no excuse — or at least listen to the soundtrack on Spotify. Plus, with the game’s finale supposedly based on Toby Fox’s fever dream, curiosity is reason enough for the indefinite wait.