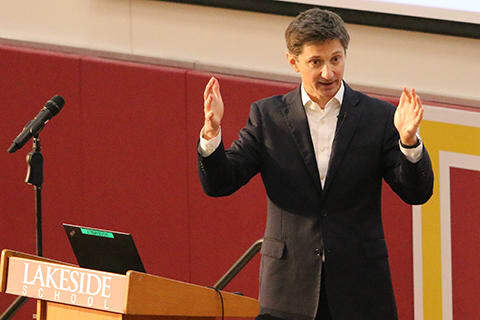 Dr. Gregg Colburn is an assistant professor of real estate at the University of Washington researching housing and the causes of homelessness. On Dec. 15, prior to his speech for the BMGI Speaker Series on Economics, Dr. Colburn met with Stellan M. ’23 to discuss his research. This interview has been edited for concision and clarity.

SM: I want to start off talking about your career path and the switch you made mid-way through. How did you end up studying affordable housing?

GC: My first career was in finance — investment banking and private equity. It was a great career, but I’d always had this interest in being a college professor. But there was the inertia of life, I had a good job, and it was like, ‘Why would I disrupt the apple cart?’ So I stuck with it, and 17 years later, I’m turning 40 years old. I really knew I didn’t want to do that for another 20 years and decided to make the shift and enter a PhD program focused on housing policy with the hopes of becoming a professor. And I really brought my first career, my understanding and experience in markets, and applied that to help us understand what we need to do to provide affordable housing.

I had this strong interest in housing because I feel that it is this bedrock system in society: if you don’t have it figured out, it’s very hard to achieve these other outcomes that we care about, whether it’s education or employment or health care.

GC: I’d say your question is the central tension we’re facing in Seattle: do we deal with the emergency that we’re facing right now by creating more capacity for people to get off the streets and into shelters? I am not opposed to that solution, but just creating more shelter capacity is not an end to this crisis.

Critical scholars will say the shelter system is mainly built for all of us. It makes our experience in the city more pleasant and therefore it’s an out of sight, out of mind issue. And I worry we will fool ourselves into thinking we’ve made the problem better when in fact we’ve just taken it out of view.

SM: How do you respond to people who say that homelessness is a personal failure based around drug addiction?

GC: Well, it’s a common narrative. We do know that drug use, mental illness, and poverty are disproportionately represented in the homeless population. We also know that homelessness causes these conditions. Drug use sometimes is a coping mechanism for people who are experiencing homelessness, and mental illness can be a consequence of a very traumatic life spent without shelter.

If we see someone on the street who is addicted or mentally ill or both, we don’t know if that was the driver of the homelessness or consequences of the homelessness. I would guess that many of these stories [about addiction causing homelessness] are based on anecdote rather than systematic analyses.

SM: Where do you receive the most opposition to your work?

GC: I would say all over.

There are a lot of people who are generally progressive, thoughtful folks, but when it comes to homelessness, they have a very different kind of perspective. People have deeply formed opinions that are maybe not well-informed. Now, fortunately, I’ve had a lot of experiences where I’ve given a talk, and people have come up and said, ‘You really helped me change my thought process around this.’

The fear of homelessness and the damage it can do to a community causes even people who are relatively liberal to behave in a pretty harsh response and say, ‘We just got to get these people out of the area.’ I understand that position, but placing blame on the folks who happen to [be homeless], as opposed to thinking about the structural causes — that’s where there’s a disconnect.

SM: What is your personal response to homelessness? How did you connect with this issue?

GC: I’m not super proud of this, but I’m just angry about it. To me, in arguably the wealthiest country in the history of the world, having this number of people without housing is a moral outrage. I have great compassion for homeless people, but it’s my outrage that motivates me more.

SM: In conducting your research, what anecdotes from people experiencing homelessness have been most moving to you?

GC: When I was getting my PhD in Minneapolis, there was a guy at a shelter where I was working who was originally from Chicago, and he was a commercial painter. During the Great Recession, he quickly went from having a pretty good job to being homeless. He was now living in a men’s shelter and decided to pursue training in the culinary arts.

He didn’t have a car, it’s wintertime in Minneapolis, and he would walk two miles to this culinary arts place that was giving them free training. He would walk back to the shelter, and as part of his training, he would make dinner for all the men in the shelter and help clean up.

Then he would wake up at six in the morning and do it all over again. So when people say, ‘Homelessness is a choice,’ I just think about this guy walking through the cold in the winter in Minneapolis. There are a lot of people who are like that. We just don’t have any idea of what their experiences are.