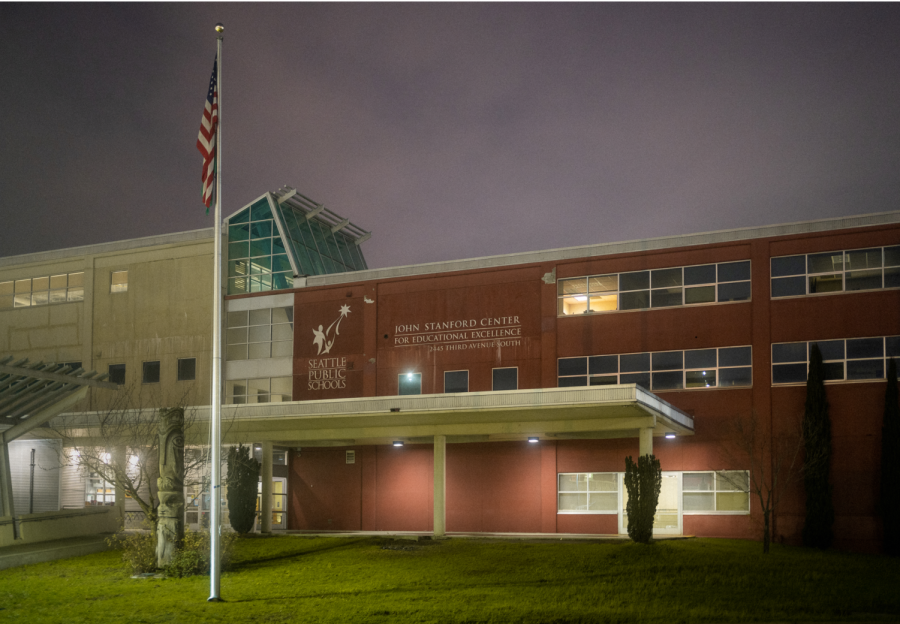 John Stanford Center for Education Excellence, where SASA and other students demanded for reform

It has been a busy couple of months for Ballard High School’s Students Against Sexual Assault (SASA) advocacy group. In fact, SASA has only been around for a couple of months, as it was founded on Oct. 4 of this past year when Rosa Basiji, Dylan Carney-Woods, MJ Lambard, Nicoló Potestà, and Cass Sylves met in a gender neutral bathroom. There, they planned SASA’s first rally, a sit-in protest, in less than an hour. The advertisements they then posted to Instagram spread rapidly throughout the school and beyond.

Fast forward to the chilly evening of Dec. 1, when over 100 students from around the district converged on Seattle Public Schools’ John Stanford Center for Educational Excellence in SoDo. Lit by flood lights overhead and equipped with a microphone, speakers stood atop a plastic table. SASA leaders addressed the crowd with their demands, and others shared their personal stories of assault and the failure of their schools to support them. Protesters held signs reading, “SPS [Seattle Public Schools] needs to protect survivors” and “My clothes are not an invitation.”

For the protest, SASA compiled a list of demands for the school district, which include training for district-mandated reporters on how to respond to reports of sexual assault, an improved sexual education curriculum, and sexual assault-specialized therapists in every high school. They also demand a policy that students currently undergoing an active investigation for sexual assault or rape, or those convicted of these offenses, are banned from participating in school-run extracurricular activities.

These demands parallel policies at Lakeside. For example, Lakeside faculty and staff receive an annual training on preventing sexual violence; SASA’s demands state that trainings must be held monthly “to have maximum effectiveness” and be “in-depth and continual.” While Lakeside’s trainings are annual instead of monthly, they discuss vital issues such as the legal and ethical responsibilities of being a mandated reporter. SASA’s demands also include placing a therapist specialized in sexual assault in each high school; at Lakeside, both Dr. Sjoberg and Ms. Swanson are trained in dealing with sexual assault and “work with local agencies and mental health professionals that provide support to those that have experienced or perpetrated sexual assault,” says Dr. Sjoberg.

A long-term project for SASA and Seattle Public Schools is divorcing the district’s sexual education curriculum from King County’s FLASH (Family Life and Sexual Health). SASA states that while FLASH covers issues like birth control and STDs, it lacks an adequate focus on sexual violence, even though it does have a lesson on “Coercion and Consent.” SASA recommends a lesson on sexual assault that includes what it can look like, related resources for victims of assault, and a specific description of the reporting and disciplinary procedure for sexual assault. Notably, the proposed curriculum for SPS would begin in kindergarten, whereas FLASH starts in fifth grade. The change would implement a steady course of learning on consent and other wellness-related topics starting from an early age, leaders say.

By comparison, Lakeside’s wellness program begins in fifth grade and ends in ninth grade, although, of course, not all upper school students come from the middle school. Lakeside’s cohort of Wellness teachers develop their independent curriculum themselves, so they undoubtedly know it well. In contrast, King County recommends but does not require formal training for teachers leading the FLASH curriculum. To compare the current Lakeside wellness curriculum with SASA’s recommended lesson, Ms. Lutton says that ninth-grade wellness classes now look at and discuss different definitions of consent, make Lakeside’s resources accessible for survivors, and teach how the school deals with cases of assault. In the middle school, personal development classes “talk about consent and sexual relationships in every grade, although in different ways.” The sexual violence prevention workshops (taught by Mx. Sandusky) are currently a pilot program, but will likely continue next year, possibly in a different form.

SASA’s final demand is that students currently undergoing an active investigation for sexual assault “lose the privilege to participate in school-run extracurricular activities.” At Lakeside, actions are determined on a case-by-case basis, but if a student is placed on an interim suspension during an active investigation, they are not allowed to attend school events, extracurriculars, and programs.

During the rally, a Board of Directors meeting was in session inside the building, and members later came outside to address the growing crowd. One board member, Michelle Sarju, shared a personal experience of rape. School board Vice President Chandra Hampson also spoke, saying, “We should have already solved these issues for you. We should already have an environment where you can feel safe.”

After SASA’s first rally at Ballard High School, Principal Keven Wynkoop stated in an email to parents that most cases of sexual assault happen outside of the school’s “jurisdiction to investigate and discipline” but that they still support victims “in a variety of ways.” (He was later placed on paid non-disciplinary administrative leave for undisclosed reasons.) SASA argues that the school can and should do more to support victims. In an interview for KIRO-7, Cass Sylves, one of SASA’s leaders, said “We shouldn’t still be walking around with our abusers in school. We shouldn’t have to face that every day.”

After the Dec. 1 rally, Basiji, Carney-Woods, Lambard, Potestà, and Sylves took a week-long break as the leaders of the movement, coming off of a hectic month of planning rallies, writing speeches, and meeting with local publications and TV stations. As a result of their advocacy, SASA leadership and members have now been placed on the district’s official Title IX task force, composed of parents, staff, and community organizers, that has been working on proposing revisions to this policy, which “protects people from discrimination based on sex in education programs.” Potestà says, “The minute that [the school board] stops making progress on our demands is the minute that we start planning our next protest.”