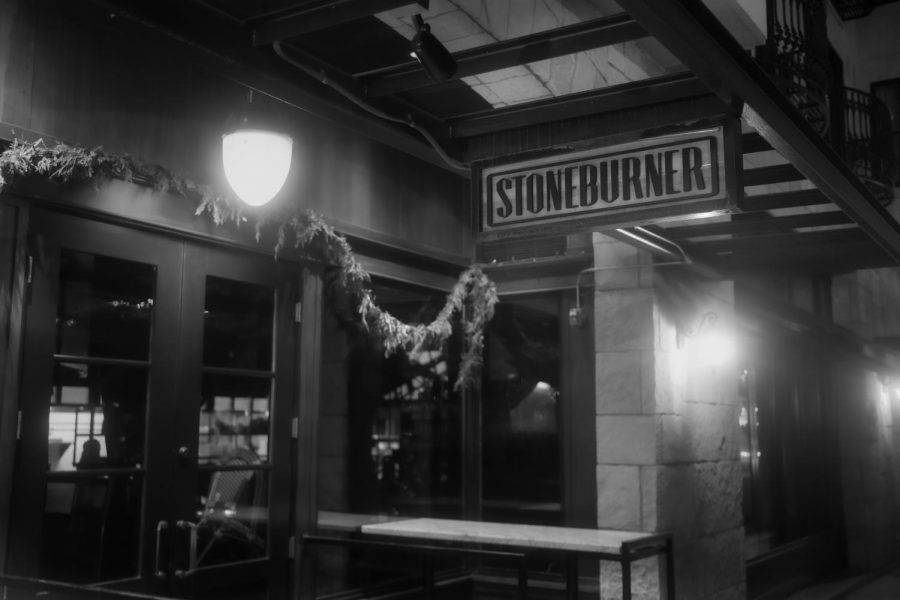 The short walk along Ballard Avenue to Stoneburner is reminiscent of a quaint European neighborhood. With the brick streets, few cars, trees decorated with twinkly lights, and an eclectic mix of boutiques or restaurants, you hardly feel like you’re in Seattle. And while the interior resembles many other fancy Americanized Italian restaurants, the flavors reach far beyond Italy and incorporate influences from around the Mediterranean. Once I was seated comfortably at my table, the waiter offered what he considered highlights from the menu. He suggested anything on the veggies list and noted that all of the cheeses are either homemade or locally bought and that the pastas are not to be missed as all are also completely homemade. With this I knew I had to get at least one pasta and one cheese dish.

So to start, I had burrata. The bread served alongside was steaming and fluffy in the middle and crunchy on the outside. The burrata itself was beautifully smooth on the inside and the tangy, sweet cranberry yuzu preserve was an excellent complement to the saltiness of the bread and burrata. Following the burrata was a trifecta of veggies; the roasted beets being the front runners were absolutely amazing. The beets, which bursted with flavor, were served on top of smoked labneh, a thick, creamy, and mildly tangy Middle Eastern soft cheese prepared from strained yogurt. Beet salads being one of my favorite appetizers, I can say I don’t think I have had a beet dish as unique and delicious as this one. This dish can only be described as fresh, light, and flavorful.

Alongside the beets was the blistered broccoli which challenged the idea that cauliflower is better than broccoli. The broccoli had a beautiful char on the edges (thanks to being cooked in an industrial pizza oven at 650 degrees) and was served on top of miso tamari tahini which was the perfect complement. While slightly heavier than the beets, the broccoli was a great spin on a generally disrespected veggie. The last appetizer dish I had was roasted carrots — another tasty and balanced dish. The carrots were served on top of avocado cream, had a soft texture, and were nice and sweet from the honey glaze and mint. The crema had a small kick to it, which slightly mellowed the carrots’ sweetness.

In contrast to many Italian restaurants, Stoneburner offers just a handful of pastas and large plates. For my mains I tried Mafalde pasta with porchetta sugo and the catch of the day: mussels. Stoneburner’s handmade Malfalde was one of the most interesting pasta types I’ve seen. It was flat and wide with wavy edges on both sides. The pasta itself could easily be differentiated from bought pasta; its cooked texture was softer and less rubbery than other thick pasta types and simply tasted fresher. Porchetta sugo is a roasted pork shoulder and the pasta was confited in the pork fat, meaning the pork was broken down and used to cook the dish. It was rich and flavorful and came in a smaller portion which I appreciated. If it was served as a massive pile of pasta, it would be less enjoyable and quite overwhelming.

I finished off my entrees with the mussels. I’m generally a big fan of all mussels and clams, but this dish didn’t stand out to me. I guess I was used to a garlicky, white wine broth with the mussels and wasn’t ready for the chraime broth — a combination of garlic, cumin, lemon peel, paprika and coriander commonly used in fish dishes in Mediterranean Africa. The broth didn’t really match the mussels and was slightly overwhelming. The last plate of the night was the Lemony Cake. This dessert shared the texture of a Starbucks lemon cake but was richer and more “ornamented.” The desert was served with fresh huckleberries and cream cheese ice cream. Cream cheese ice cream might seem like an odd flavor but it was surprisingly effective as a neutral flavor. If vanilla ice cream is your baseline for flavor, imagine one tier lower — a little less flavor, a little more body. The ice cream was more used for texture and temperature variation than actual flavor. With the rich lemony flavor of the cake mixed with little tart huckleberries, the creamy texture and soft flavor of the ice cream helped balance the overall composition of the desert.

The skill of balancing a wide range of flavors at Stoneburner will certainly have me walking the cobblestone street again soon!