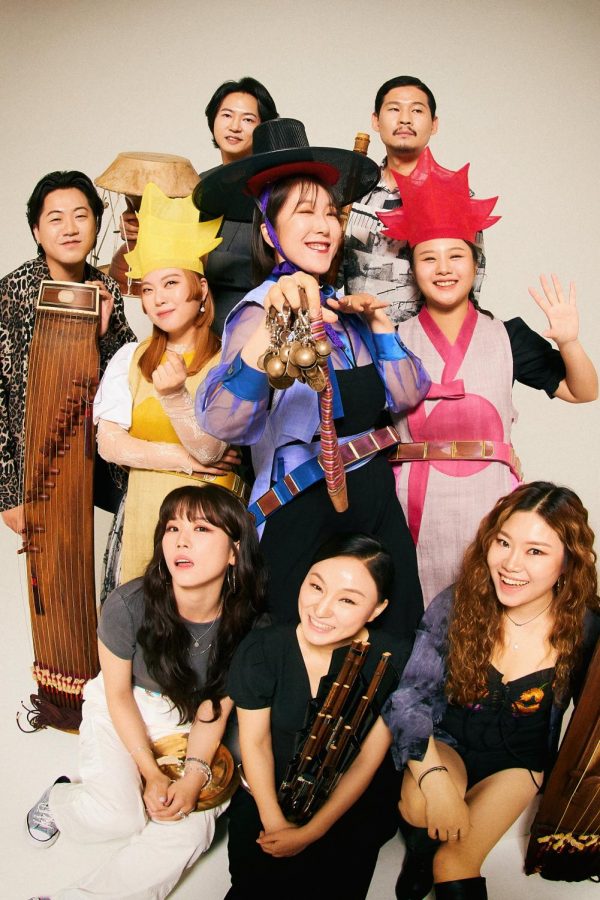 There comes a time in every person’s life when they go to an arts center and watch a group of Korean artists perform an intriguing mix of shamanic music with traditional folk tunes, performed with the glitzy stage presence of a pop concert. Or maybe that’s just me, but I for one think it should be a universal experience.

Ak Dan Gwang Chil (ADG7 for short) is a Korean band, consisting of Kim Yak Dae on the daegeum, a large wooden flute-like instrument; Lee Man Wol on the piri, a piccolo-like instrument played like a recorder, and the saenghwang, a handheld wind instrument with a large number of vertical vents like an organ; Grace Park on the ajaeng, a horizontal bow-and-string instrument; Won Meon Dong Maru on the gayageum, a similar but plucking-only string instrument; Chun Gung Dal on a percussion set that mixed Korean drums with Western acoustics; and singers Hong Ok, Myeong Wol, and Yoo Wol.

Their repertoire is inspired by Korea’s sacred, shamanic ritual music (gut) and beloved folk songs (minyo) of the Hwanghae Province in the northern Peninsula. This range is intentional, being founded in 2015 to celebrate the 70th anniversary of national Korean liberation and to celebrate what unites the peninsula, both North and South. As such, although much of their music is giddy, oftentimes goofy, and overall a ton of fun, there is an emphasis on the importance of preserving the styles from what is now western North Korea. This translates into what is known as Joseon Pop, pop music based on music prior to the Japanese occupation of the Korean Peninsula.

The concert in question started with a more traditional local dancing group from the Morning Star Cultural Center, which included percussion-based choreography. Although a pre-show performance, not even raising the stage curtain, they were impressive in their own right. Some of the later act combined dance choreography and deep percussion in an almost hypnotic fashion. The sheer energy in these performances made it clear that they were having fun. I will also admit that the section that brought in the kids was adorable, particularly the one where they were deftly banging on buk (a “sideways” handheld drum) that were almost as large as the kids were.

The main show, though, was something. It was definitely an experience to go from energetic, but analogue, dance performance to glitzy pop bathed in colored revolving stage lights. I’ll start with their stage presence and other aspects of their performance. The lead singers’ outfits were of particular note as they were “modernizations” of traditional Korean garb. Hong Ok wore a black traditional gat and hanbok with a side-cut robe usually worn by middle class men while outside the house. Myeong Wol and Yoo Wol wore hanbok for life inside the house that was also worn by middle class men, though the bright primary colors are atypical. They also alternated costumes, sometimes bringing out attire meant specifically for the king and his highest ministers.

I think the most surprising part of the night was when the singers beckoned to the audience to stand up and clap. I will say I was not really prepared for that, nor the section where they taught us some basic Korean dating advice that I’m sure is going to come in handy when I inevitably flee the Fallout era of American history. It was weird at first because of the contrast of this technically-pop concert in a pretty formal concert venue, but once I got past that it was a load of fun clapping along with some really enthusiastic middle-aged Korean moms.

Going back to the actual music, I loved it. There were the aforementioned influences of shamanic music with folk songs, especially with the beginning songs. One was even a comedy tune based on a kid coming back home after absolutely botching his grade and telling his mom not to worry about it, and there really isn’t an experience like watching three grown women in traditional garb sing and dance while six instrumentalists go ham on their respective instruments. There were some with unexpected hip hop influences as well, particularly one song where each singer took a turn performing what sounded like a mix of rap and chant, which sounds absolutely nonsensical but I assure you was very cool.

The last two performances were probably the most impressive of the night. The 2nd to last focused on solos, each performer taking turns from left to right doing absolutely flawless cadenzas. I can’t stress enough how much they absolutely shredded, some of the wind instrumentalists holding notes for what felt like an eternity and the string players absolutely flying across their instruments.

The final song, although intentionally not flashy, was certainly the most impactful of the night. It was a respectful arrangement of a piece dedicated to the life of Korean comfort women who were sexually enslaved during imperial Japan’s occupation of Korea. The chorus of singers, previously lively and sometimes mischievous, took on a more solemn quality, and was the only time Hong Ok brought out a set of bells meant to summon the gods.

Honestly, with how heavily this concert leaned into the sound and visuals, it’s impossible to accurately write about it. I can’t exactly tell you to attend a concert considering I doubt they’ll be in the area for the foreseeable future, but they do have a YouTube channel (that they promoted during the concert) so please, go take a watch.