From One Quirky Newspaper to Another: A Review of The French Dispatch 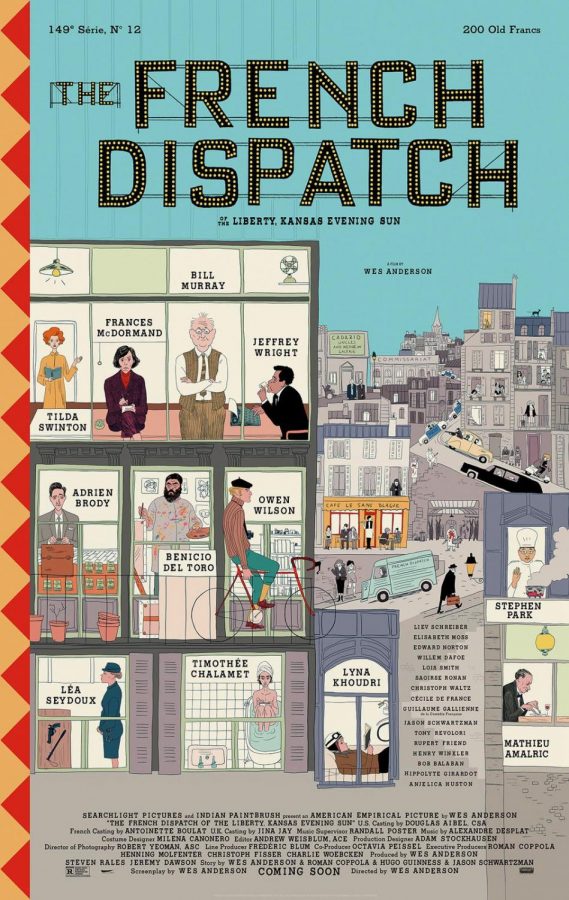 No Time to Die: the best (and hopefully only) 25th sequel dominating theatres today. An action/adventure about the unmatchable James Bond, PG-13 No Time to Die is also absolutely not what I watched two Thursdays ago. Instead, with my No Time to Die ticket in hand, I slipped into The French Dispatch, an R-rated romance/comedy, at the ripe age of 15. Neighboring my supposed viewing of super cool middle aged spies, you could call the film my girl next door. It was a simple act of espionage to slip into The French Dispatch’s backrow seat, avoid the eyes of watchful ushers, and find myself gazing up at a grand, splashed-in-pastel screen buzzing “Wes Anderson.”

Grown from Wes Anderson’s presumably perfect, symmetrical brain (with a tiny Owen Wilson yelling, “Cast me!”), The French Dispatch is like reading an eccentric issue of Tatler. Set in the town of Ennui, the premise of the movie is designed as a tribute to the late Arthur Howitzer Jr., The French Dispatch’s longtime editor in chief. The story dives into the final edition of the paper, featuring Arthur’s obituary and four articles, biking from sections like art to food in “The Concrete Masterpiece,” “Revisions to a Manifesto,” and “The Private Dining Room of the Police Commissioner.”

The French Dispatch carries all the elements of Anderson’s typical movie. For one, the picture is littered with big names like Bill Murray and Tilda Swinton. Each frame is decked out with familiar faces, attracting certain Chalamaniacs on the prowl. Next, its structure follows a broken-down-into-parts style. It allows the viewers a simpler (yet detailed) story to absorb. Lastly, and most importantly, Anderson’s excellent visual storytelling arguably trumps the content of his stories in the film, his first official anthology.

This footing doesn’t, however, make the series of short stories any less valuable. In fact, Anderson’s focus on visual qualities such as camerawork and costume design highlights what he does best: art. With this art, Anderson is able to show the development of the story and his characters in ways unique from other popular directors today. Consistently switching from color to black-and-white, the film goes from distant stories about the past to vulnerable stories on the now. Action scenes are not shown with his typical straight shots and are instead painted and animated onto the screens—faces are made cartoon as well as backgrounds and inside jokes. All in all, The French Dispatch’s last issue is meticulously crafted with great charm and wit.

Despite these benefits, The French Dispatch ends up too Wes Anderson for its own good. Notorious for his Orientalism, Anderson represents The French Dispatch’s only East Asian character, Lieutenant Nescafier, as a “police chef” who utters not a word throughout most of “The Private Dining Room of the Police Commissioner.” This problematic stereotype about a compliant Asian immigrant is fortunately subverted somewhat adequately, boiled down to a sense of foreignness that everyone seems to feel. However, the film remains exclusive—its redundant mostly-white cast is what really ends up placing me in Ennui. But maybe one day, Wes Anderson will fully understand that his exocitism of the East only limits his work to a white audience. Perhaps in the town of Diversité.

So, was The French Dispatch worth my potential misdemeanor charge from the government? Certainly. But if the fuzz asks, I was at No Time to Die. Au revoir!