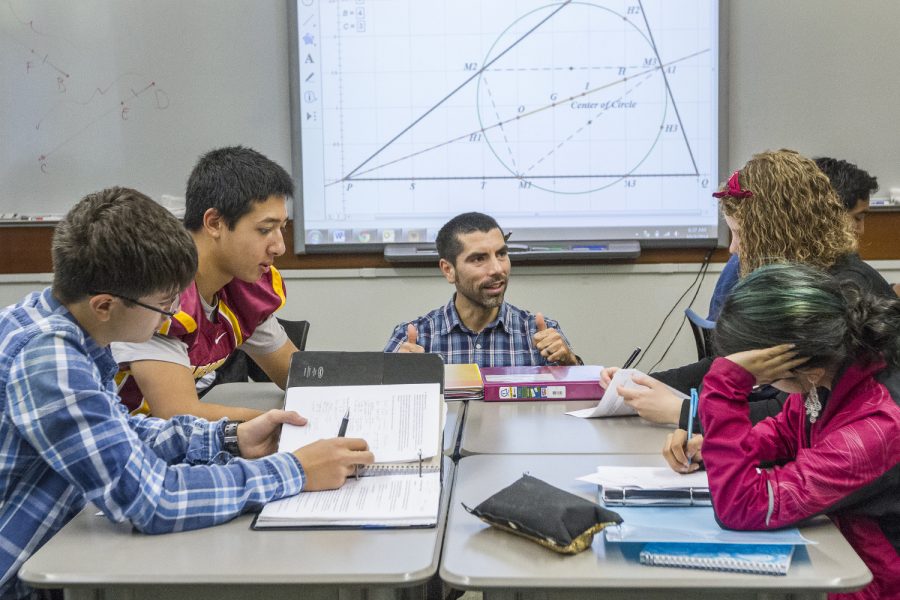 Every December before winter break, students are invariably treated to a humorously written yet somehow existentially terrifying Course Sign ups/Curriculum Guide FAQs!! email from eminent Upper School Academic Dean Hans de Grys. Math classes have never been a popular topic for discussion—choosing Victorian Lit over Multiethnic Lit requires much more agonizing than choosing the one math course in the already-fixed math track dictated by the laws of prerequisites. As a result, it’s easy to overlook that students actually have math elective choices that deviate from the well-trod path, from statistics to Linear Algebra to Math of Democracy—not to mention Computer Science courses also available as math credits.

Things weren’t always this way, however. If Mr. de Grys had been sending out his brilliantly crafted emails back in 1937, the accompanying curriculum guide to his FAQ would only contain five math classes: Algebra, Plane and Solid Geometry, Fusion Mathematics, Trigonometry, and Analytic Geometry. Before you jump to conclusions, no, “Fusion Mathematics” was not a class about nuclear fusion; it was a course that combined geometry and algebra. Six years later, ambitious Lakesiders would have the opportunity to take calculus. And by the 1970s, computer programming had found its way into the courses offered by the math department. According to curriculum guides from the 2000s, Lakeside had at the time established M700 “Advanced Mathematics”, a semester-long class whose content “depended upon the interests of the students,” ranging widely from linear algebra, differential equations, graph theory, algorithm development, chaos and fractals.

In the 2010s, Lakeside’s math curriculum underwent a significant overhaul, at least in part due to course-naming confusion, resulting in the curriculum students today are familiar with. According to Math Department Head Todd Kresser, around that time the series of “Intensive” classes were replaced with the more standard Honors classes due to perceived confusion from colleges over what “Intensive Algebra,” for instance, was supposed to mean. Accelerated math classes were also added in between standard-level and Honors classes to fill in what used to be a larger leap in content and pace. Tatler staff writer Rebecca D.-G. ’14 quipped in 2011 that “Lakeside will soon see if the solutions to the altered math curriculum equation is positive or negative.” Happily for the math department, 59% of 116 Tatler poll respondents explicitly expressed satisfaction with the current three levels of each class (regular, accelerated, and honors).

Another relatively recent change has been the introduction of computer programming into math classes. Students in Honors Geometry or Precalculus become familiar with coding projects as a part of math class. Mr. Kresser explains that the incorporation of Computer Science into math ensures that students have a chance to learn and apply programming, since it seems a little daunting to directly take a full-semester Computer Science class. However, the volume of coding in math courses diminishes in more advanced courses such as Calculus and Multivariable Calc.

Available math courses are tied closely to variations in student interest. A change in placement policy a while ago, Mr. Kresser notes, led to a significant number of students taking Geometry as freshmen, and two years later taking Calculus as juniors. This became a problem in the not-so-distant past, when Lakeside did not offer more advanced courses beyond Honors Calculus. Since many students enjoyed math and wanted to take a math course all four years, and because having a gap in mathematical learning between junior year in high school and freshman year of college might be troublesome for students later on, the math department decided to fill that year-long spot for math class during senior year with Multivariable Calc.

Electives have also sprung from the minds of students in the past. Independent studies, available in nearly all departments, have been around for ages as opportunities for students to explore further interests not covered in classes or electives, and it has also been a way to judge areas of potential curriculum expansion. Linear Algebra, for example, sprung up partially “because so many students were taking an independent study in linear algebra that it didn’t really make sense to call it an independent study anymore,” says Mr. Kresser. He also explains that consideration for new electives are also based on the number of students who can realistically take a course year by year, so a new class with Multivariable Calculus as a prerequisite probably will not be offered in the near future since the number of students with atypical trajectories in math classes fluctuates from year to year. On the other hand, it is possible that there will be more electives that are open to a wider range of students, which is more to look forward to in the next decade or so.

Students in the 1990s would have found it unimaginable that in 2021, there would be such a wealth of math classes, with four packed Multivariable Calculus classes and one full Linear Algebra class. As science and technology continue to drive education and society at large, students in the class of 2035 might find themselves enrolling in advanced classes studying differential equations, artificial intelligence, or algorithmic paradigms. No matter how technology changes, though, one thing will always be for certain: the math curriculum will continue to evolve, fueled by the enthusiasm of Lakeside students.