Ultimate Frisbee Sport Status May Be Up in Air No Longer 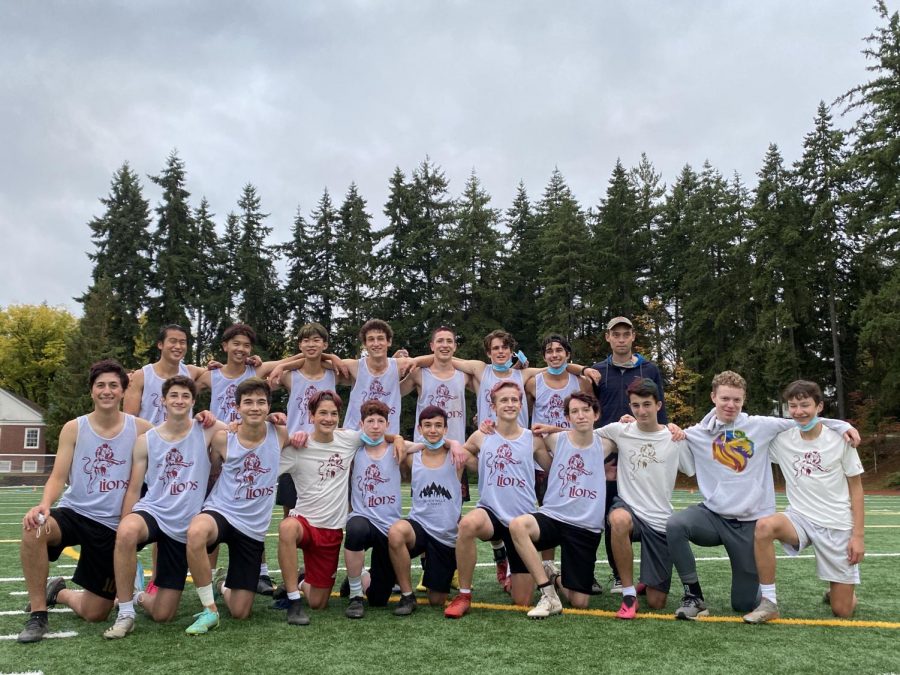 Correction: in the print version of this article, the headline reads “Ultimate Frisbee Sport Status: Up in Air No Longer.” This has since been changed for clarity.

Silence hung in the air of the Bliss Hall conference room longer than a frisbee hucked upwind. On one side of the conference table sat four captains of the boys’ and girls’ Ultimate Frisbee teams — Ann H. ’22, Ethan D. ’22, Ai-Li H. ’22, and Josh K. ’23. On the other, Chris Hartley, director of Upper School athletics; Eleanor Long, head of the Ultimate Frisbee program; and Jeff Bonar, Upper School assistant director. As if engaged in corporate negotiations, the two sides stared at each other across the divide of the conference table, unsure where to begin.

Mr. Hartley finally broke the tension: “I could tell from your questions and remarks that you wanted to prove that you’re worthy of becoming a sport,” he said. “It was never in question that you all were anything less.”

From there, the meeting became less of a negotiation than a Q&A session for the frisbee captains — determining how, after more than 30 years of efforts to gain official sports designation by Lakeside, the Ultimate Frisbee team could be upgraded from an athletics program to an official sport in the 2022-2023 school year. On November 19, Mr. Hartley formally proposed including frisbee under the athletics budget to Head of School Bernie Noe and CFO Birage Tandon — the closest the team has come to reaching sport status. If approved by administrators and the board, Mr. Hartley’s proposal will officially make the much-ragged-upon younger sibling of the athletics department a sport, a change that would bring funding, field space, and — its captains hope — validity to the program.

This search for recognition has become a signature of the Lakeside Frisbee team and frisbee as a whole. Where other sports have referees and penalties, ultimate has “Spirit of the Game,” a trust in each player to officiate themselves, call their own fouls, and treat opponents courteously. To many observers, this unconventional approach to enforcing rules is interpreted as a sign of an informal activity, rather than a fierce competition.

Off the field, frisbee players invariably suffer through one well-trodden jest from peers: “You mean activity, not sport.” No banner hangs in Ackerley Gymnasium for the team’s state championships, and no emails are sent to the student body announcing the team’s playoff games — small but noticeable details that leave players and captains feeling undervalued for their commitment and athletic abilities.

Arguably the most teased sports program, the frisbee team has embraced its unconventionality, making their half-approved status a part of their identity. The team jokingly changed its name from “Lions” to “Loins,” with a new logo of a fearsome lion with claws extended, wearing a prominently featured loincloth. No players for other sports at Lakeside receive their own nicknames, either: every year, frisbee captains give out jerseys personalized with nicknames such as “Quadzilla” or “Ravioli” to each player.

Perhaps these traditions are a product of the sport’s unusual origins at the school. Founded by a group of outdoors-oriented students in the 1980s, the Nordic Skiing Club was Lakeside’s premier destination for braving it in the cold. During the week, the club held regular workouts including ultimate frisbee, and on weekends, they went on ski trips. A 1988 Tatler article playfully noted the Nordic Skiing Club’s prowess in both shredding the slopes and shredding opposing defenders: “Besides being totally dominant in the world of interscholastic Nordic skiing, the teams have set the standard for the rest of North America in the dog-eat-dog, kill-or-be-killed sport of Ultimate Frisbee.”

However, as interest for the gear-intensive skiing trips faded, interest in ultimate continued. As founding advisor Hugh Tower notes, “You don’t have to wax your frisbee.” A series of Tatler articles in the Februraries of 1988, 1989, 1990, and 1991 all focus on the Ultimate Frisbee team, with the last one titled, “Nordic Skiing: Underappreciated Athletes Who Really Need Athletic Credit.”

This struggle for athletic credit has lasted decades. Dating back to at least 1991, players have unsuccessfully attempted to earn sports designation for ultimate, but momentum fizzled out once they graduated. Captains were told that facilities were maxed out, field space too scarce. The team gained some ground in 2017 when it was upgraded from a club to an athletics program.

As they produced more notable players, including three-time All-American Jack Verzuh ’15 and John Randolph ’17, named the best collegiate player in 2019 and second-best collegiate player in 2020, respectively, the ultimate team became increasingly successful on the playing field, the boys’ team winning consecutive state championships in 2015 and 2016. Then, with Brendan Wallace, a quantitative ecology graduate student at the University of Washington, signing on as varsity head coach in 2019, the program found new vigor and emphasis on individual improvement.

The current campaign to become a sport started in 2019 with players like Roman Short ’20, Colman Bashore ’20, and Elise Chan ’20, who voiced their desire to become a sport to Ms. Long. Though the efforts were sidelined during remote learning, Ann recognizes their contributions: “They made it easy for us to sweep in and take the victory.”

Now, the Loins are inches from winning. “There were tears in my eyes,” Ms. Long says of gaining Mr. Hartley’s endorsement. Nearing the culmination of a decades-long effort inherited, forgotten, and revived through the years brings similar elation to players. Cami P. ’25 says the news elicited a guttural “LET’S GO!”

But this change would come with different goals for the boys’ and girls’ teams. Where the boys are seeking respect for their high level of competition, the girls are seeking to build a consistent base of players. In this past season, there were 35 players on the boys’ roster — more than enough to have robust varsity and JV programs. Their sights are on playoffs and the state championship. The girls’ team, whose season is in the spring, sometimes does not have seven players — the amount of players on the field at a time — at practice, so Ann hopes to gain more publicity for recruiting new players.

With the potential of official recognition, however, comes a question for the captains — will formal validation alter the team’s informal identity? Ultimate’s personalized jerseys were a favorite of the team’s rituals, but the athletics department requires sports to reuse jerseys from year to year. “People who are out there do it because they like the game. They don’t do it for honor or respect, because they don’t get much of that, anyway,” said one Loin, Cheryl Holzmeyer, in a 1993 Tatler article. Ethan shares the sentiment: “Something about being overlooked builds resilience.” Maybe it’s the pursuit of validation — being the scrappy, off-beat section of Lakeside athletics — that’s at the core of the Loins’ identity. What will their identity be now?

Ultimate will still be ultimate, the Loins still the Loins, the captains say. Frisbee will still be the sport of goofy nicknames (though nicknames will now be put on sweatshirts that players will keep instead of jerseys), playing in mud during wind storms, and singing along to Taylor Swift during warmups. Varsity will still practice two hours a day, five days a week at Hamlin Park, a 10-minute drive from Lakeside, but gain access to Lakeside fields for special occasions. And ultimate will still be the game of catching, cutting, and throwing.

The Loins’ unwavering spirit is on full display in the state semifinals against Eastside Prep on November 2. The team is coming off two victories: their success in securing Mr. Hartley’s support to become a sport and a win against Seattle Academy in quarterfinals in the week prior. Already, they have surpassed expectations, going 11-0 in league games and making their furthest playoff run since 2017. But now, only one game away from reaching finals, the team is not content, as Mr. Wallace makes clear in a huddle before the game: “I want to win this game,” he says. The team roars in agreement.

An electricity courses through that huddle. Nightlights glare harshly off the turf of Neudorf football field. Hands are numb, the frisbees slick from autumn drizzle. Parents and friends of players who made the trek to Tukwila on the blustery Tuesday night sit in the stands, holding cow bells to ring when Lakeside scores.

They don’t use those cow bells much, though. Lakeside throwers appear panicked and wide-eyed; they frantically scan the field for some opening, but everywhere they look, Eastside defenders seem to be there.

Down 9-0, the Loins regroup during a timeout. Mr. Wallace tells the team he wants players on the sideline sprinting full-throttle after each point, win or lose. Finally, they get on the board with a connection between captains Torin B. ’22 and Josh. The Loins play hard to the finish of a 13-5 defeat, including a three score run — no small feat in ultimate.

After the game, there is no avoiding Eastside Prep’s celebration, their team sitting lined up in their endzone, boisterously pretending to row a boat for reasons still unknown. The Loins circle up at the corner of their endzone for one last huddle, steam rising off Ethan after he’d emptied the tank in his final game as a Loin. Mr. Wallace, his eyes glistening, tells the team he’s as disappointed in the result as they are. There’s silence for a moment. Then players share their gratitude for the seniors, their pride in their accomplishments as a team, as a program, as a sport. The Loins hold their heads high and walk off the field onto new turf.

After years of students pushing for ultimate frisbee to become an official sport (see “Ultimate Frisbee Sport Status May Be Up in Air No Longer” on the Tatler website for more information), captains and coaches were elated to be informed early this February that ultimate would officially join the sports roster for fall 2022. As reported by Mr. Hartley, the decision was made this past December by Head of School Bernie Noe and CFO Birage Tandon. After Mr. Hartley presented the anticipated costs of running the program, Mr. Noe and Ms. Tandon gave it the go-ahead to be included in the athletics department next fall. While current senior captains will not be here to experience the change, they are excited about what it means for the program. “I can’t wait to see how this will build our frisbee community up in the future and am so glad I was here to see this decision made,” said captain Ai-Li H. ’22. When asked if there will be any requirements or trial periods for frisbee joining the department, Mr. Hartley says there will be none: “Ultimate is in, 100%.”