Battle of the Languages! 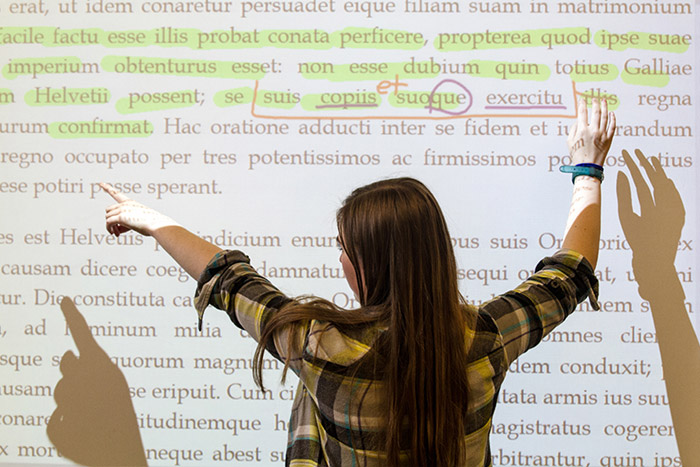 The Hunger Games takes place in an arena designed for clash and death; Squid Game is on a remote island hidden away from the rest of the population. Now, the most brutal game of all, held in Bliss Hall (not for the faint of heart), we have the Battle of the Languages! Lakesiders have been studying one of the 4 languages offered for years, praising their language while secretly criticizing all the others. Now, these groups finally get the chance to put their feelings on display and show everyone why the language they’re learning is the best of them all!

The first contender: French. For me, the first things that come to mind when French is mentioned are baguettes, berets, and oui oui’s. But there is (probably) more to this language than bread, questionable fashion choices, and one of the most well-known words for “yes.” First up, we have a take from Sophie B. ’24, a French III student who writes that French is “ABSOLUTELY the best language. Unlike other languages *cough cough​* Latin *cough cough*, it is used around the world in many different countries… and comes in handy whenever you need to impress your date.” Though the Latin slander was a bit uncalled for, Sophie brings up good points. So what do people on the other side of the argument have to say? One student surveyed in the Tatler poll remarks that “the accent required to speak properly in this language is difficult. French classes at Lakeside are also reputed for their intensity.” Another said “I take French, and it’s so useless. When am I ever going to use this?!”

Next up is Spanish. Definitely the most popular language, seeing as it’s second most spoken in the world (Spanish learners LOVE to use that statistic). But is it worth all the hype? One student in Spanish II thinks so: “The food from Spanish speaking countries is top notch, and it’s a pretty useful language. Spanish is also really fun to speak because of how fast it can be.” On the flip side, many students think Spanish is too fast-paced. One says “Spanish classes tend to progress the fastest, resulting in more homework and complicated content.” But according to Sophie, Spanish is hard to pronounce and “generally not as cool as French.”

Third, we have Chinese, which seems to be a very mysterious language at Lakeside. One surveyed student sums it up nicely: “Nobody knows who takes Chinese!” Luckily, I was able to find Akal S. ’25, who is currently in Chinese II. “I like Chinese because it provides me with a good challenge… The class also creates an environment that encourages students to learn from their mistakes,” she says. A big problem that other people have with Chinese is its difficulty. One complaint: “The lack of an alphabet makes writing quite hard. It is also very hard to speak if one has not been exposed to it from a young age.” And, my favorite poll response: “Chinese hard.”

Lastly, the one everyone’s been waiting for, Latin. I’d like to take on this language myself – from a completely unbiased viewpoint of a Latin I student, of course. That being said: LATIN IS THE BEST. I know that we’ve all heard the common gripes: what’s the point of learning a dead language? But in the words of the great Magister Searl, “Why are we judging it based on its usefulness?” Sure, it might not be useful, but are you really only learning a language because it will be useful later on? We do lots of things that don’t directly help us. Take art classes: when you’re trying to figure out how to pay rent, the tricks your band teacher taught you to get the best tone quality aren’t going to be that helpful either. But that doesn’t mean you shouldn’t be in band! Likewise, just because Latin is dead, that doesn’t mean we shouldn’t learn it.

In the end, all the languages have good things about them; I just think we should get a chance to complain, at least a little bit. Let’s all just remember the most important takeaway: Chinese, French and Spanish are great; Latin is just a little better.