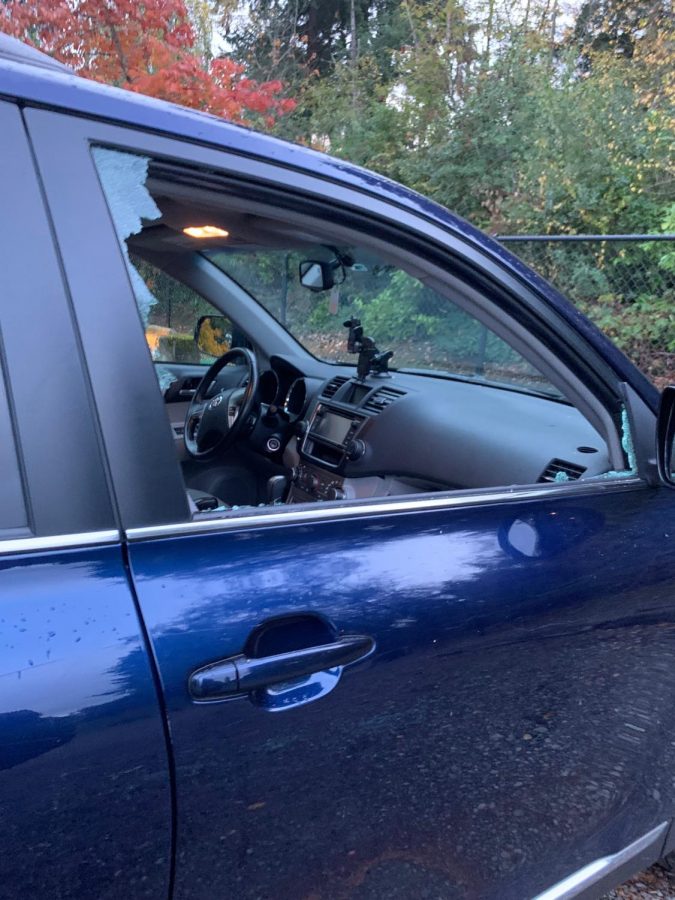 A junior (he requested anonymity) was in a meeting in Bliss Hall after school when the calls started rolling in. He couldn’t answer immediately, but the buzzing in his pocket grew increasingly unnerving by the second. When he left his meeting, he answered his phone and immediately ran towards the soccer field across the street. He was told that there had been a break-in at Stimson, and his car, along with those of several other students, had been broken into.

The Stimson parking lot across the street from Parson’s Field is one of several that Lakesiders park in. A symbol of the growing independence offered to upperclassmen, it is nearly always full by the time school starts. But with so many cars promising relatively unguarded property after school ends, thieves occasionally break into them, stealing some valuables and discarding others. According to Head of Facilities Dan Dawkins, there have been more than 20 cars broken into throughout the last 10 months.

Some students are aware of the dangers of parking in Stimson: in the Tatler Poll, one junior writes that they knew security was minimal, so they avoid leaving anything in their car that they wouldn’t want to lose. Others view break-ins to be arbitrary and inevitable.

Either way, disaster struck on October 22nd, and the junior was caught in the midst of it. Eight cars were broken into in broad daylight — the girl’s soccer team was practicing right across the street on Parsons Field. However, since no alarm was set off, the incident was not discovered until students returned to their cars from sports practices. According to the junior, people’s passenger and back windows were shattered, and anything within reach — jackets, backpacks, cash, and electronics — was snatched. After he found out, the atmosphere was frenzied with tears, frantic phone calls, and hurried attempts to track down devices.

It turned out that the thieves had rummaged through the stolen property, taken off with the valuables, and dumped the rest. The parents of several impacted students were able to locate the pile at a nearby parking lot and brought it back to Lakeside. “People were very happy when they saw their chemistry notebooks come back,” says the junior, but belongings such as laptops and cash were lost permanently.

The aftermath was handled well by Lakeside, the junior believes. The school comforted the distraught students, and the maintenance team cleaned up the shattered glass. Since the police do not respond to occurrences like school break-ins, Lakeside filled out an online police report, which was then sent to insurance companies. “We did what we could to help,” says Mr. Dawkins. “That said, the biggest consequences are the stress this adds to the car owners and the students driving.”

Indeed, the Stimson break-ins impacted student perception of security on campus. This event is relatively well-known: of the 114 poll respondents, about two thirds knew about the incident, and half of those knew someone whose car had been broken into. When asked if the break-in impacted their perception of Lakeside security, respondents gave mixed responses. Some recognize the unpredictability of break-ins and acknowledge that Lakeside is limited in what they can do. However, a sizable number of students feel less secure as a result of the Stimson break-in. “I was one of the first to see the break-in and I was super scared when I saw my window completely smashed,” writes one junior. “I’ve been getting my car out of Stimson as early as possible now.”

Others worry that the school is not doing enough. One sophomore “would like to see [more resources] be allotted toward student safety, [including for] vehicles that are broken into.” According to Mr. Dawkins, the security team reassigned afternoon guards to concentrate on fuller parking lots such as Stimson and the Allen Athletics Center, because they are less visible and more prone to break-ins. The team also hired additional guards, active between 3 pm and 6 pm.

At the end of the day, “there’s only so much you can do,” says the junior. “I still park at Stimson and don’t feel unsafe doing that.” His advice on returning to Stimson? “Do what they say — don’t leave your valuables in your car.”