A Guide to Lakeside’s Arts Clubs 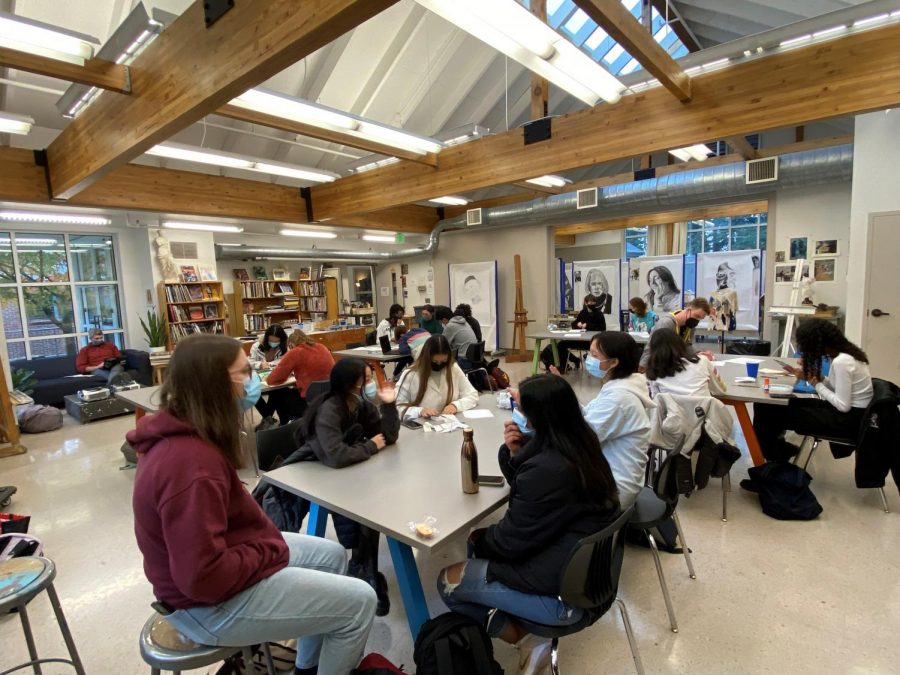 The inaugural meeting of Art Club. Come swing by every Tuesday in Pigott 302!

There are 71 official clubs in the Lakeside School. That’s quite a lot.
Considering the importance of clubs on Lakeside culture, what with Clubs Fair and its associated snacks being such a staple of the fall season, and the fact that the A/B schedule was designed to aid in club viability, the sheer number of clubs of all subjects is by no means surprising. However, this leads to a simply ludicrous number that either limits the number of members a club can feasibly have, or ends with people signing up for dozens of clubs and only visiting a few of them.
I have discovered a solution: instead of visiting a variety of clubs to fit your diverse interests, like an absolute plebeian, you can sort by the broad topic they cover and specialize in this field specifically. I’m tempted to make a D&D joke but I won’t.
As such, here is a short little featurette of the eighteen arts-related clubs. Which, I realize as I type this, is still a considerable number of clubs. Hmm. Good luck with that!
(If you lead a club you consider to be about arts and haven’t been featured, please let us know in the Tatler poll and we will contact you to be added).

Acabellas
The AcaBellas, along with the Fellas, is one of the most prominent music-related offerings at Lakeside by virtue of their regular on-campus performances. It is an a capella group that performs for the greater school community in a variety of functions and venues, occasionally off-campus as well. It draws from all grade levels rehearses at least once a week.
The leaders of the AcaBellas — Hanae V. ’22, Bianca M. ’22, Katherine S. ’23, and Sophie W. ’24 — value the club as “an important part of the Lakeside arts community because it provides female-identifying singers with an incredible opportunity to find community, develop their musicianship, and perform for others,” and hope “that the return of in-person learning will allow us to reinstate many timeless Bellas practices: live performances, team bonding events, and rehearsals filled with terrific harmonies.”

Art Club
The Art Club has it in the name. It creates a space for visual artists, prioritizing creativity and the importance of art against the overwhelming push for productivity and fully-booked schedules rampant among Lakesiders. Elissa M. ’22, the club’s leader, cites the club’s major focuses as “Time, Fun, Community, Service, and Professionalism— i.e making time to create, having fun and relaxing, increasing the exposure of art in the LS community, doing service, and getting to know the art industry.”
Elissa and other club members have a number of goals for the coming school year, including a “partnership with the art department and administration regarding displaying more student artwork around campus. We also hope to get some service done, whether that be mural painting or fundraising via auctions.”

Chamber Club
Chamber Club is Lakeside’s opportunity to participate in small chamber orchestra activities, with Lakeside already offering orchestra and many students already playing in extracurricular youth symphonies like SYSO and BYSO. Ally B. ’23 and Laura H. ’23 lead the club, and state that due to students not being able to “play together in person for over a year, it’s important for musicians to grow connections and experiences with others at Lakeside.”
Similarly, due to in-person meetings allowing proper instruction on certain musical techniques, they aim to “take full advantage of in-person rehearsal by providing competition opportunities, space to practice, and coaching from chamber music professionals from around the region. We also want to show non-musicians the beauty of chamber music, and hopefully convince Lakesiders to pick up a new instrument or two.

DIY Club
DIY Club offers a place for students to express their creativity, de-stress, and bond with their peers via the medium of do-it-yourself arts and crafts projects, particularly in a world post-online school. Club leaders Caroline G. ’24 and Chloe P. ’24 cite DIY’s accessibility as an important draw, offering “an easy way to engage in art when in a creative mood, because they are usually quick but also offer a way to express creativity.”
The two aim to “create a fun space for people of any skill level to come in and engage with art! We want it to be a stress-free time where people can socialize while crafting and doing something they enjoy. We hope that our club is an opportunity for people to connect with others and just have fun!”

Folio and Film
Folio and Film offers members a themed book club, doling out an array of recommendations that include their respective movie adaptations and video essays to make the material more meaningful. Members can also share the material they are reading and their opinions on it. Avery P. ’24 credits the importance of cultivating “an environment where people can read the genres of books that interest them, instead of required books for school… The film aspect of the club gathers a bigger crowd and brings an exciting new element to a book club.”
Avery also details what she hopes for the club, offering a place to “meet new people and to inspire club members to read more. No one who joins the club needs to be an extreme reader, but my hope is that they really enjoy reading by the end of the year. I also hope to get more recommendations myself!”

Game Dev Club
This club aims to teach the basics of game development, primarily focused on the code but with an additional focus on art, character design, sound design, writing, etc. One element in particular is game design, allowing videogames the potential to be a unique and impactful art experience, augmented by good visual art and design.
The club leaders — Brandon P. ’24 and Bryan C. ’24 — state their hope that their “club will provide a space for students to come explore their interests, learn a bit about game dev, or just chill and hang out,” as well as that it will “create enthusiasm for game development and teach people how to create basic games using Unity, a game engine used widely in the industry by many developers.”

Global Dance Club
Global Dance Club is a lowkey international dance club, trying out different dances from different corners of the world as a form of self-expression and destressing. Their emphasis is inclusion, and that everybody, no matter their skill level or profession, can join in. It also provides a space to just move, as dancing benefits both physical and mental health.
Its two leaders, Welela S. ’23 and Isabel S. ’22, hope to work with affinity groups to coordinate events and perform at assemblies, and eventually create and release their own music video. “I felt like Lakeside was missing a dance program … and the school dances were never really up to par, so I felt like having a dance club would help people get more comfortable in their own bodies,” says Isabel.

IMAGO
IMAGO is Lakeside’s quarterly student artwork magazine, focusing on Lakeside’s art culture. As art is often seen as a quiet, side topic, IMAGO aims to bring it into the spotlight of student life along with STEM and sports. Aaron Z. ’23, a leader of IMAGO this year, wishes to unify student art culture and continue promoting it. “Lakesiders have the art, the drive, and the crazy and beautiful ideas; we just provide a platform for them to show it,” explains Aaron.
IMAGO has many goals this year, including printing physical quarterly issues, an increased focus on promoting artists, and building itself up into a proper art magazine. As Aaron says when asked why he leads the club, “I wanted to see all the submissions and build a proper art magazine. I brought up the idea of Tatler x IMAGO last year, and we’ve been slowly rebuilding since. We basically want a new publication — a new way of connecting with artists, a new design language, and a new engagement with Lakeside.”

Lakeside Jazz Club
Jazz Club functions as Lakeside’s small-group jazz ensemble club, focusing on improvisation to develop both the musicians and listeners. In this vein, it promotes risk-taking, artistic expression, confidence building, teamwork, and communication. They also focus on the awareness playing jazz brings to music, jazz’s African American origins, and the world in general.
Its leaders — Andrew Z ’22, Ian M. ’23, Henry B. ’23, and Liz C ’24 — “introducing everybody new the club to the idea of improvisation, then later work towards coming up with some concrete and finished pieces we can play,” and for performances “at Lakeside and outside of Lakeside as well.”

Movie Club
Movie Club is interesting in that at the beginning of the year it was two separate clubs, only recently merging into a single entity. Its four leaders — Ben S. ’24, Stella P. ’24, Orion A. ’23, and Thomas H. ’23 — created a club to appreciate film, de-stress, and foster a movie-loving community.
They hope that, after the isolating year of quarantine, movies can “cultivate a community of people with a shared interest in movies in a relaxed environment,” especially given that “Lakeside at times can be a very rigorous school and many students could benefit from a time to just relax, and movies being art that extraordinarily brings people together in a unique way, is a perfect way to do that.”

Music Production Club
Music Production Club teaches members the fundamentals of music production. They also teach different genres of music production, such as lo-fi, hip-hop, pop, and edm, as well as creating collaborative music projects and lessons on how to use music-creation software.
Their hope is to fill the gap in music creation that other clubs and curricula leave open, as most Lakeside music programs seem to be based on rehearsal and performance rather than composition and creation. Rahul S. ’24 looks forward to finally “downloading the software we need to produce music, since last year we encountered difficulties with that … and music is something that is very difficult to convey through a screen … so I believe that nature can finally be accomplished.”

Our Voice Club
Our Voice focuses on the performance aspect of musical art, encouraging “Lakesiders to share their talent in the arts with elders in senior living centers. It gives students a simple way to earn service hours and positively impact their communities through skills they already have,” as Grace P. ’22, Edward Y. ’23, and Katherine S. ’23 explain.
With the months upon months of COVID-related isolation, particularly for elders, this form of volunteering becomes more important. Due to reopening, the leaders “are incredibly excited for our members to perform at senior living centers again, and our goal is to host as many events as possible so that students have the opportunity to perform live.”