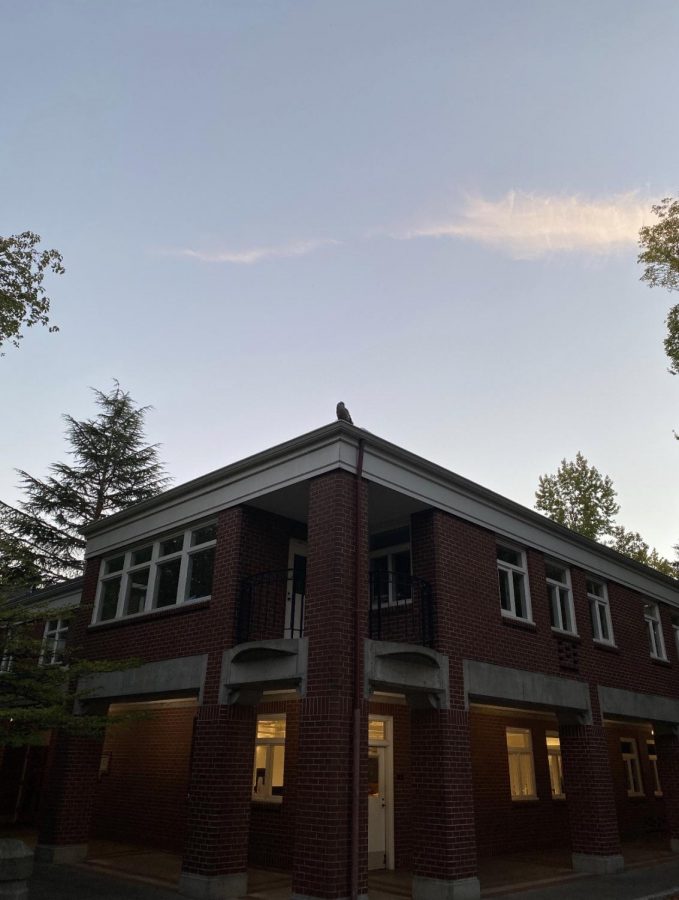 As it turns out, birds are common. As it also turns out, no matter how much you want to, you cannot approach and sweet talk the crows into telling you their secrets, which I’m totally not saying because I tried to do exactly this.

There is, however, something interesting about bird populations that I have deemed the “bird iceberg.” The most prominent species on campus are so protrusive that many people believe they are the only species that exist on campus: just crows, sparrows, and seagulls. And yet, once you realize that there are, in fact, more than four avian species on the entire tract of land, all you can seemingly hear, see, and otherwise activate neurons at are formerly unseen species that you swear weren’t there the previous year. Now, I find it unacceptable that only a few of us may be cursed with this knowledge, so I offer this guide to some of the many birds one can find on Lakeside campus.

The most reliable are some of the more common Seattle birds — fellas like crows, various gull species, robins, song sparrows, dark-eyed juncos and the chickadee siblings, black-capped and chestnut-backed respectively. These are your generalists, species one might typically think of when considering suburban bird populations. They can be found in the Generic Bird Spots: between trees, in bushes, on the ground, on the Quad, on Bliss, scavenging the remains of some poor unaware freshman’s lunch.

Faculty bird expert Mr. de Grys weighed in some of his observations. Some standouts include red-breasted nuthatches, a small and energetic species with a black-and-white head pattern, blue-gray upperparts, and orange-ish belly. They are found around Bliss, Allen-Gates, and the WCC. There are also nesting birds: “Starlings” (robin-sized iridescent invasive jerks), “nest in the big trees outside the Student Center [and] band-tailed pigeons nest in the tall trees around the track, and you can see their fluttering flight display in spring and summer.” Year-round there are Anna’s hummingbirds buzzing around Pigott Family Arts Center. Around spring there come a few western tanagers (slightly smaller than a robin, yellow with a black back and red head) and occasionally olive-sided flycatchers (similar-sized, sooty gray-brown upper parts with paler underside). Finally, “of course our local celebrity, the barred owl who lives in the ravine near Bernie’s house.”

Some students have noticed the presence of these fellows. Olivia W. ’22 mentions when she saw “some American Robins doing some really cool parental distraction displays to draw me away from their nest under the library.” Meredith G. ’22 documents how she has seen flickers (robin-sized spotted tan woodpecker) and she “had a memorable moment seeing a barred owl in the trees in Red Square after rehearsal, affectionately named Annabelle ‘Owlbert’ Egbert III by the fall play cast”. And, as Maya D. ’22 reminds us, “the dead stuffed duck in the freshman bio classroom.”

Now that you have learned about these feathered friends, you are understandably emotionally invested in them and their plight. Well, I have a solution for you. The best thing you can do is to learn more about birds and the threats they face, particularly climate change and invasive species of plants and animals. Perhaps even volunteer for organizations such as the Seattle Audubon Society, Mountains to Sound Greenway, and the Washington Environmental Council. And, of course, please for the love of all that is good and holy, either avoid planting or just straight up remove invasive species.

You might wonder why these birds show up on the campus of a Seattle high school in the middle of a suburban sprawl, next to the infrastructural hell that is Interstate 5. And I really want you to stop, backtrack, and analyze that question, because I would think that literally any and all places other than the cracked asphalt and ten-billion-sedan-clogged streets would be preferable. Lakeside is, as Mr. de Grys puts it, practically an oasis with “big trees, bushes, grassy areas, and some relatively undisturbed natural habitat (behind the library and chapel). It’s all good habitat for bird species that are reasonably well-adapted to life near humans.” So don’t you feel just stupid asking that question. And, as any true Lakeside aficionado (or AcaFellas member, apparently) knows, “Lakeside, our Lakeside/ the birds are all her friends/ she’s a paradise/ if you use your eyes/ and there’s joy there without end.”