Brimmer and Heeltap: A Hidden Gem with Remarkable Flavors 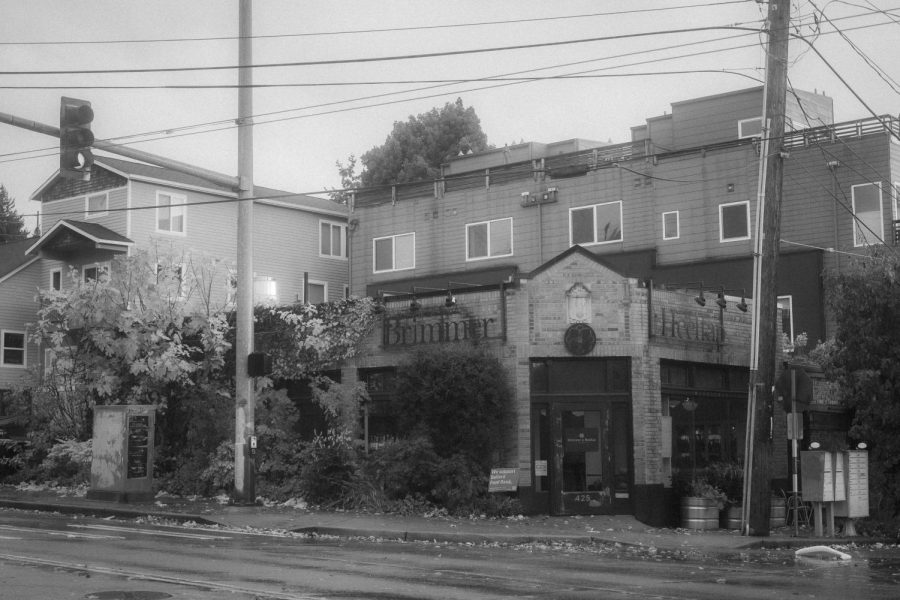 Throughout my life, there have been countless instances where my architect parents have pointed out a hidden, somewhat random detail in a building. Often I don’t understand what they are talking about; however one concept I do understand and appreciate is when a hotel or restaurant has a great indoor-outdoor space. Brimmer and Heeltap, a quaint, single-story brick restaurant at a corner in West Woodland perfectly incorporates this architectural concept into an exquisite dining experience making it a must try for all Lakesiders.

The brick facade of the restaurant, adorned with large metal lettering in the windows and dim orange lights, creates a textured and warm ambiance. Through the window, Brimmer and Heeltap may look small; however, there is surprising depth to the space. Beyond the entry room, which holds a bar and a wall of intimate tables (generally for parties of two), I journeyed through the wine cellar, then out a back door. A small path, marked by strings of lights, a cozy fire pit for casual dinners, and lush foliage leads to a secluded open air dining area for larger parties. Fully open on one side, the outdoor patio seamlessly transitions into an “indoor environment” where overhead heaters keep diners comfortable on a brisk October night.

The surprise of this trek set the stage for an exceptional dining experience. The tables were a glossed wood that matched the back wall of the space and the blue overhead lights, while the chairs complemented the restaurant’s indoor color scheme of white and turquoise. The menu was simply a narrow piece of paper with a handful of appetizers, salads, and entrees. I appreciated this restraint having suffered through dinners where the host drops an encyclopedia of a menu on the table with few new or interesting options. Here, though small in numbers, each item on the menu was either completely new or a twist on a classic.

Radishes and Roe was a nice, fresh dish to start with. It was light and offered a medley of flavors: the salty punch of the roe, dill-infused creme fraiche, and crisp and zesty radishes stimulated all the senses. The melon salad followed with a whole new set of flavors. The tamarind-hibiscus reduction had a deep sweet flavor with a mellow spice thanks to a dash of cayenne pepper which balanced out what could be an otherwise overly sweet salad. The salad was full of movement and the interacting flavors played a tango on my palette.

When the salad was cleared, a steaming bowl of Manila Clams and thick cut slab of house bread was placed in the center of the table. Hands down, the clams were the best I’ve ever had and the bread was mouth wateringly addicting. The waitress said we should get two breads because we’d be desperate for more. That was an understatement as I was tempted to grab the bread from our neighbors. It had a beautiful crunchy outside with a fluffy, warm, buttery inside that was perfect for soaking up every last drop of the clam broth. The broth had a deep flavor and color due to the use of parsley and hard cider base. Alongside the clams were absolutely amazing ricotta dumplings. They felt very similar to a gnocchi but were slightly larger and shaped more like a squishy pillow. The pesto alla trapanese, a Sicilian variation of Genovese pesto which uses almonds instead of pine nuts, was rich and warm, while the soft ricotta on the inside and bursting cherry tomatoes offered even more textural variety to the dish.

The Fig Leaf Ice Cream with almond praline was as close as it gets to a perfect dessert. At first glance, it didn’t stand out like other “classic” desserts on the menu such as the flourless chocolate cake. I had never even heard of fig leaf ice cream so I had to order it. Most fruit ice creams tend to be sweet, but this one was mellower and had a rich, creamy texture. The light crunch of the almond praline created balance and texture to complement the ice cream.