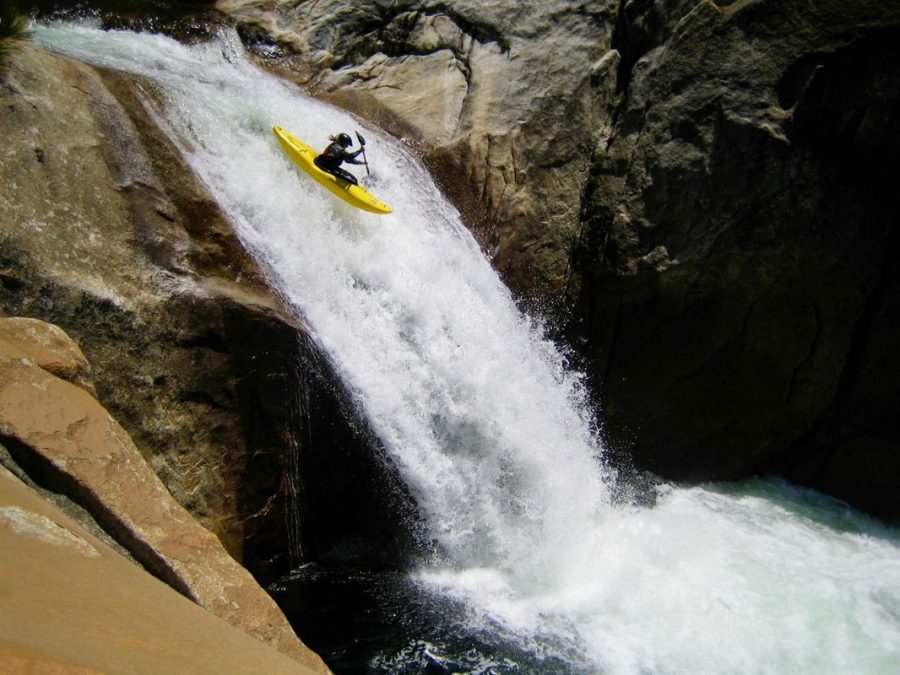 Darcy sending it over Upper Cherry Creek in California

ZS: Did you know that you wanted this lifestyle or job growing up?

DG: Every year, starting in third grade, I did one week of outdoor education. I recently found my notes from my senior year trip, and I wrote, “I don’t know what I want to do, but I know that I want to live my life like we’re living right now.” I wanted to be more free and have these outdoor adventures; that’s what I wrote when I was 17, and I’m pretty much following that now.

ZS: You mentioned that you hoped that kayaking the Amazon would be a “mark of closure” for your adventurous lifestyle. Instead, it did the opposite and also opened up the writing world for you. Why did you want to stop and what did you gain by continuing to live as you desired?

DG: The older I got and the more people that questioned my lifestyle, the more it made me think: if everybody else wants me to be doing something different, maybe I should do something different. I was worrying about having retirement savings and more security in life. But the trip turned into an affirmation of living life the way I wanted to; I think that if I stopped doing stuff like the Amazon expedition, I would have many more regrets about that than I would about never having had a normal job.

ZS: In what ways has being a woman made it more difficult for you to succeed in the kayaking/guiding industry?

DG: People look at me and make their initial judgments; they don’t give me a lot of respect. It’s been a lot of feeling like I have to prove myself. The older I get, the more I realize that most of the time, I was also trying to prove to myself that I could do these things. I feel much more relaxed about it all now. I don’t let it bother me so much because I know what I’m capable of. And that’s good enough.

ZS: You mentioned in another interview how important it is to be vulnerable and your goal to become more open. Are you still working on that aspect of yourself?

DG: I definitely grew up thinking that being vulnerable was a bad thing to be. My mom gave me this birthday card that said, “All the things I love about you,” and one of them was, “I love how vulnerable you are.” I went to her and made her cross it out. But you realize that when you act that way, you seem very distant, unapproachable, and in a way, fake. Just being honest makes me feel like a more real person. It’s still hard for me, but it’s coming along. It’s a work in progress.

ZS: Do you have any advice for students or teenagers right now who are trying to figure out their futures/passions?

DG: It’s hard to not be swayed by what everyone else is doing or what your parents want you to do, but it’s so much better if you can listen to yourself and figure out what you want. If you give up on what you want and follow what other people want, you’re eventually going to end up with regrets, resentment, and anger. Even though it can be difficult in the moment, pursue your own passion.

ZS: Those are all of my questions. Do you have anything to add?

DG: It’s hard not to make judgments of other people, but it’s important to change that. I’ll see someone, and I’ll make my judgments, but I have to consciously think, “Why don’t I get to know them and find out what they’re really about?” If you can be that way to other people and show what you’re made of, then you can, in turn, expect them to give you the same kind of respect.

This interview has been edited for concision and clarity.