Fall Play 2021: Listening and Being Heard 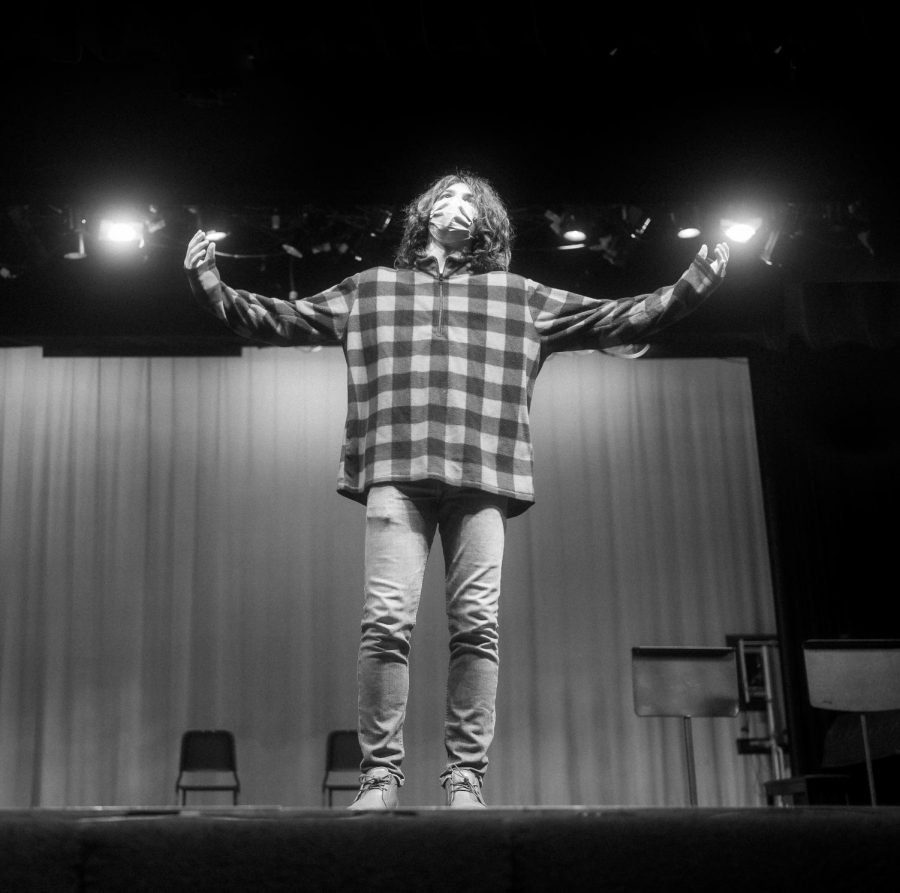 Talking to people and being seen is terrifying, and this is coming from me as a drama kid. Back in 2019, I was still a freshman, brand new to Lakeside. I discouraged myself from doing most of the theater productions. I was, frankly, scared of vulnerability, both from the pressure of being on-stage and the weight of interacting with other student actors whom I had never met before. In the back of my mind, I reassured myself that initial self-isolation would be fine: I had all the time in the world to gradually ease myself into the community until the foreignness of my new school would just magically melt away.

But then March 2020 happened. My freshman self would adapt well to the remote environment — seeing people through tiny Zoom squares in the safe confines of my room seemed a lot less demanding. I was proven wrong. I quickly discovered how wonderful it was to work with creative artists, how others also shared my initial reluctance to connect, and how communicating and listening would allow us to heal and build community despite being physically isolated and separated. And now, in 2021, I can’t describe how excited I am to finally step into St. Nicks and be present alongside the many talented members of the drama community.

The 2021 fall play will be The IT by Vivienne Franzmann. It follows the experience of a teenage girl, Grace, and the thoughts and occurrences that contribute to her struggles with mental health, self-expression, and healing. The play explores challenges that are highly relevant to current events, student experiences, and family dynamics. “I think every aware person is going to feel something that they can relate to,” says Alban Dennis, the director, “Whether it’s something happening in the news, in their own neighborhood, or with their own children and friends. Everyone in the audience will feel some connection to Grace’s experience.”

According to Alban, his favorite thing about the play is how it is collaborative and allows “every group to come up with their own answers to unstructured problems that are in the play.” So far, rehearsals have been exactly the case, plus a ton of laughter and energy. “It’s so much easier to communicate and collaborate in-person,” says Meredith G. ’22, remembering the discussion, exploration, and that one funny-but-too-relatable-and-nerve-wracking scene by Lorenzo C. ’22.

For Sadie D.S. ’24, who had spent her freshman year entirely remote, the in-person rehearsals have become both a creative outlet for self-expression and a way of strengthening community. “The people who join drama are really dedicated and passionate, and the community is so welcoming,” says Sadie, her voice excited and sincere. “Theater is like a sport. We have long rehearsals, we have high levels of commitment, and we have our own game days — performances.”

Stylistically, the way the play is written allows more freedom for risk-taking and personal viewpoints. Katherine Y. ’22, a member of the artistic team, explains that Franzmann’s choice of including minimal stage directions leaves many questions unanswered and scenes open to interpretation, which creates opportunities for actors to fill in the gaps and develop the characters themselves. The play is also very ensemble-oriented, where each character has their own vulnerability and relatability.

Additionally, the format of the play allows for high flexibility, given the turbulent nature of the pandemic. The play can be performed fully in-person, live-streamed without an audience, done entirely on Zoom, or filmed and edited as a movie. “We’re thinking about these contingencies,” says Alban. “We want to entertain and inform an audience, ideally a live one, but as an arts educator, my first priority is the experience of the students that are involved. I want us to have a really rich rehearsal and creation process together, and then share it whenever we can.” Most of the cast appreciate this approach. Instead of giving out concrete instructions, Alban allows the actors and the artistic team to contribute their interpretations and make any choices as they see fit. This fosters an open and engaging atmosphere for rehearsals.

It would be easy for The IT to fall under the common trope of teenage angst, but audiences may be surprised by the humor and sincerity that the story offers. I was surprised to see how much I resonated with each student in the play. One of the most crucial things I discovered during this past year was how being vulnerable is nothing to be scared about, and the play explores this exact idea. “I think the story is ultimately hopeful,” says Alban, “It shows that darkness isn’t just something we should avoid,” and that instead of keeping it to ourselves “We need to acknowledge it, embrace it, and find its beauty.”