Metro Buses Return: The Good, the Bad, and the Ugly 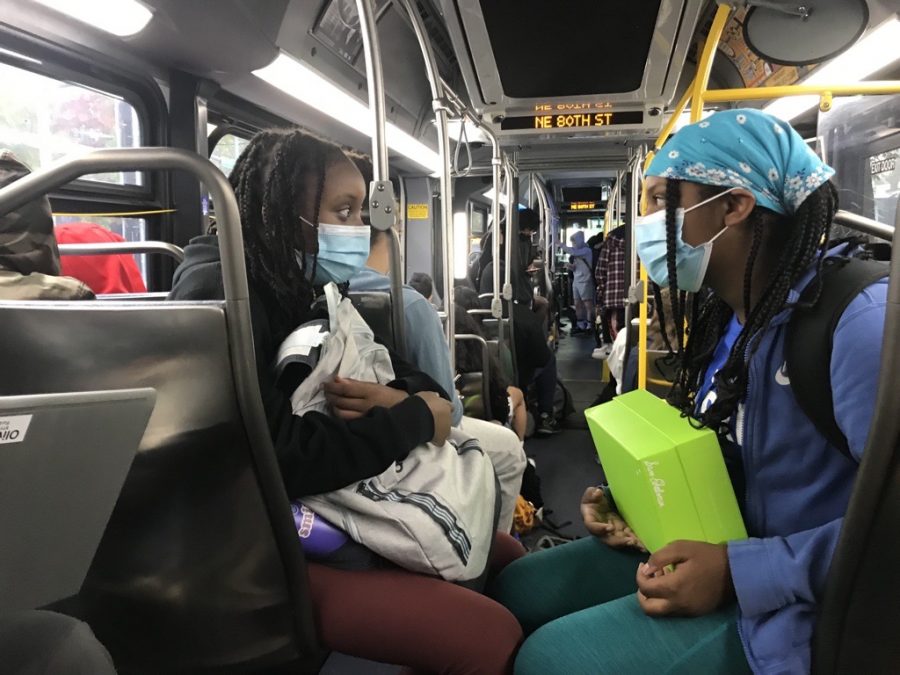 “Wrap yourself in a jacket, and sleep.”

During the pandemic, Lakeside switched from the King County Metro system it had used for over a decade to the First Student bus system, an operation with fewer buses visiting select neighborhoods. While this system was simpler to implement during the pandemic, its inconsistency in arrival and departure times did not sit well with students. The buses lacked a heater, which, during the brutal winter months, created an uncomfortable atmosphere within the bus. Because there were only three First Student buses serving all of Lakeside’s students, many had to drive up to 15 minutes to get to bus stops. These buses also had a reputation of being late. For example, the bus serving Capitol Hill arrived at school after class started three times within eight weeks.

This year, many students are pleased with the reintroduction of the Metro bus system, jointly implemented by Lakeside, University Prep, and the Evergreen School. However, old problems with these buses have resurfaced, along with other issues new to the pandemic era.

Riders of the 987 and 988 buses, serving South Seattle and Capitol Hill respectively, have noticed overcrowding issues on the two buses. One 988 rider notes, “The bus is fine until the penultimate stop to UPrep, after which it is full to the point where there are not enough seats for everyone.” Others have observed that the 987 is similarly overcrowded, to the point where over a dozen people can be standing every morning.

A possible explanation for this overcrowding is the cancellation of two bus lines, the 980 and 995, which previously served the central area of Seattle and Laurelhurst. The students who took these buses have to take the nearest alternatives, the 987 in the south and the 988 in Capitol Hill and Laurelhurst, leading to overcrowding on those buses.

Office Manager and Assistant to the CFO/Assistant Head of School Ying Purcell, who assists in running the bus system, explains why Lakeside was not able to offer these two buses this school year: “Every year we review the ridership then determine how to construct routes and adjust stops to optimize the overall efficiency of the custom bus program.” She also mentions that ridership levels for the 987 have decreased by 6% and ridership levels for the 988 have increased by 19% compared to before the pandemic. However, the number of people signed up for these bus routes remains below the maximum capacity of the bus (which is 100) and only slightly above the official seating capacity. While the stated seating capacity of the buses is 64, there are only 51 seats on the buses, which suggests a discrepancy in the official numbers. Based on this information, Ms. Purcell says, “we cannot conclude that the cancellation of the two routes [the 980 and the 995] resulted in the overcrowding on routes 987 and 988.”

The Metro buses have other issues, as noted by a 982 rider: “The bus occasionally misses stops, and drivers occasionally ask students for the route.” However, most bus riders believe that those issues are simply present because the Metro bus system was just reinstated this year, and new drivers will take time to get used to new routes. In addition, since the Metro bus system runs only twice a day instead of all day long, it is an unfavorable route for drivers.  As drivers pick their routes based on seniority, this often leads to junior drivers operating these routes.

Despite overcrowding and other issues, most students find that the Metro buses have an atmosphere nicer than that of the First Student buses. One rider of the 982 expresses that “Metro buses are much more open, and have better ventilation, which is particularly important in the current era of COVID-19.”

While the Metro buses offer a more pleasant atmosphere than the First Student buses and are also more likely to be on time, they are still prone to issues like overcrowding, intermittent tardiness, and route miscalculations. As a 988 rider remarks, “It’s quite the journey riding to school.”