Cheerleading: Outdated or Due for a Comeback? 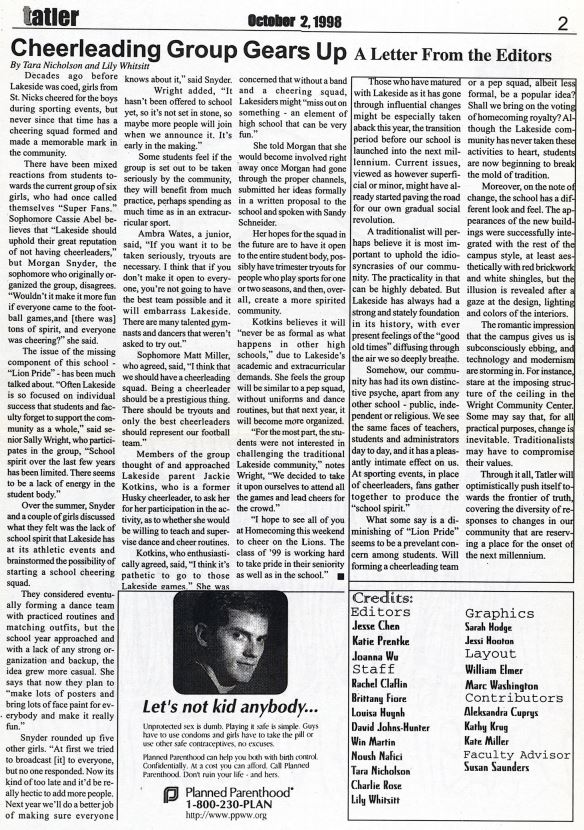 A Lakeside cheerleading squad has been only but a prospect since Lakeside and St. Nicks merged. This 1998 issue of the Tatler tells of Morgan Snyder, whose attempt to form a squad fizzled out due to a lack of organization and interest, for many believed it did indeed conflict with Lakeside's values. According to Bruce Bailey, then a student, "At Lakeside, there is no need for cheerleaders and the jock hero worship; we have a different kind of respect"

Whether it be at sports games where swarms of Lakesiders funnel into bleachers, roaring support for their peers, or at team practices where they eagerly cheer one another on, Lion Pride is an essential part of Lakeside’s community. Its importance is echoed on Lakeside’s website by Athletic Director Chris Hartley: “Lakeside Athletics focuses on what is most valuable about sports: development, teamwork, and pride. As director of athletics, I get to […] see our community come together to cheer for our teams…” In Mr. Hartley’s statement lies a keyword that seems to be a staple of Lion Pride — cheer. Yet, Lakeside remains the only school in the Metro League without an actual cheerleading team.

Lakeside’s lack of a cheer team is a contested issue between students and faculty alike.  Girls soccer  team captain Kara O. ’22 supports an introduction of cheer: “The inclusion of a cheerleading team seems like it would help the increase in attendance at games and generate some school spirit, enthusiasm, and positivity which sometimes seems to be lacking at Lakeside.” Kara echoes the voices of other interviewed students, the majority of whom agree that cheer would bring back some of the spirit Lakeside’s sports games are missing. But Mr. Hartley takes a different perspective: “Personally, I would rather have our student-athletes competing on a team rather than being part of a squad with the main purpose of cheering on another team.”

Mr. Hartley went on: “Lakeside offers 24 varsity sports, and we are proud of those. If we were to add another sport, it would likely come at the cost of another sport being less competitive or not having enough athletes to stay afloat.” Despite this, many students still show interest in the possibility of a Lakeside cheer team.With its unique take on athletic movement, combining dance and gymnastics, cheer offers a special outlet for the students who want to be active and support their school in a non-competitive and cardio-based environment. Sadie D-S. ’24 explains that  “Cheer is great because it gives kids a chance to be active without having to do competitive sports.” In the Metro League, “The bulk of [cheer’s] work is being on the sideline and cheering on their team.” Because the Metro League does not even offer competitive cheerleading, some see it as a great opportunity for students eager to move without participating in intense competition.

Cheerleading has long had the reputation of enforcing demeaning gender norms: the most conventionally attractive girls at school dressed up in objectifying uniforms, cheering at the sidelines of football games while the boys play on the field. One student expressed their agreement that these roots don’t align with Lakeside’s principles: “I feel like Lakeside focuses on gender equality, and it feels old school to have (mostly) females cheering on male sports. I know that if Lakeside had cheer it would be inclusive and cheer on teams of both genders, but I think that cheer in general just doesn’t fit into Lakeside’s core values.”

The selection process of a cheerleading team can also promote an exclusive environment instead of a spirited one. Although its purpose is to elevate school spirit, cheerleading at schools is typically selective in the way that competitive sports teams are, limiting the participation of all students interested in supporting their school. As a result, Mr. Hartley “believe[s] that a loud, energized student section brings a lot more spirit than 12 cheerleaders standing on the sideline waiting to share an organized cheer during a break in the action.”

Now we are left with a question: is cheerleading an antiquated practice that plays into toxic gender norms or an opportunity for non-competitive athletes to rally their communities? While the answer remains murky, Lakesiders will continue to show up to cheer each other on, no matter what sort of organization it falls under. Go lions!