Freshman Guide to Lakeside’s Many Quirks 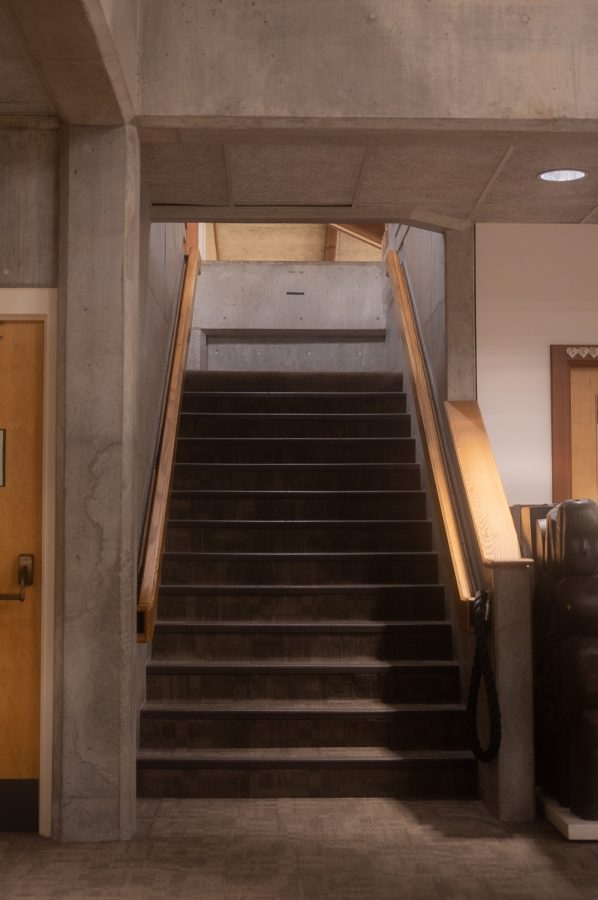 The stairway to the library's second floor. Not a step closer than this, underclassmen.

Shuffling out of the wrong classroom, going upstairs in the library and being glared back down by seniors, forgetting your lunch number and holding up a long line of hungry students—most Lakesiders have some embarrassing moment(s) from freshman year. Beginning Lakeside Upper School can be a daunting prospect: it is a school filled with quirks, unspoken rules, and interesting grade dynamics, all of which can be jarring to adjust to. In hopes of saving the incoming freshmen from this confusion, here is a brief introduction to some information you won’t find in an admissions pamphlet.

There is perhaps no better embodiment of Lakeside’s grade hierarchy than the library. This hub of illicit gaming has four main study areas, two on each floor. While these areas are only officially distinguished between individual and collaborative workspaces, in practice, each grade claims one zone of the library with little intermingling. The upperclassmen inevitably take the upstairs (which has a nicer ambience and better lighting) while underclassmen work on the bottom floor.

As a freshman, the upstairs of the library seemed to be some forbidden, mythical land. I wandered up there a few times, and while no one told me I could not be there, I received some alienating stares. I remember some classmates being petrified to venture into that strange and alluring territory to simply find a book for history class. But let me demystify the upstairs: it is just a marginally nicer workspace, not some magical kingdom.

Like the library, many opportunities can seem closed off to freshmen, whether in leadership positions, sports, or other extracurriculars. Freshmen go through an endearing but somewhat patronizing period of seniors commenting on “how adorable they are.” But your time is coming; soon enough, you’ll be sitting upstairs and taking the new kids under your wing.

The life of a Lakeside frisbee player is not an easy one. Coming from my old school, a somewhat sheltered environment where football and lacrosse were too aggressive for most students, frisbee was the most popular sport. But when I entered Lakeside, a proud frisbee player, I was surprised to find that frisbee was not only not the most popular sport, but that we were not even a sport. Because the sport is newer and more unconventional, Lakeside designates frisbee as a program not technically a part of the athletics department. Classmates who play more established sports at Lakeside seize on this opportunity to take jabs at the frisbee team. “Favorite activity, you mean,” the baseball players respond when someone calls ultimate their favorite sport. But the frisbee team embraces their status as the quirky younger sibling, proudly calling themselves the Loins instead of Lions. Their logo is a lion wearing a prominently featured loincloth, and unlike most Lakeside sports, they keep their jerseys. So despite the frequent frisbee slander that they’re forced to endure, come be a super cool frisbee kid.

In contrast, the crew team is one of the most perplexing sports cultures at Lakeside. Often dubbed the “crew cult,” rowers are constantly either complaining about wanting to quit the team (they rarely do) or proselytizing their friends to their way of life. It takes a different kind of person to willingly join crew. Ever used a rowing machine? It sucks. After two minutes, your muscles are aflame, you are doused in sweat, and you can hardly catch your breath. But if you enjoy being in constant physical pain, pulling “fat ergos,” and eating McDanks and nuggs (McDonald’s and chicken nuggets), crew is your sport.

No matter what sports you play, the banners in the AAC performance gym will give you a glimpse of Lakeside’s storied athletic tradition. Many sports teams’ banners are completely filled with the years that they won league or even state championships. In many sports, Lakeside’s dominance continues today. The tennis team routinely wins league championships, girls soccer won this year’s Metro championships, cross country often has runners place highly in competitions, and football—they play too!

Spend a week at Lakeside and you’ll hear about the infamous “Meatless Mondays,” where the cafeteria will switch out their chicken stir fries and ham sandwiches for chickpea curries or grilled cheeses. In fact, one of my main takeaways from my visit day at Lakeside was that many students suffered from meat deprivation on Mondays, so much so that someone had started an Instagram account that would post pictures of barbeque and hamburgers at the start of every week, just to get a little glimpse of the good stuff.

While Meatless Mondays may be unpopular with many of Lakeside’s carnivorous students, we are privileged to go to a school with solid food and accommodations for people with dietary restrictions. It’s a far cry from the horror stories of many school cafeterias.

In addition to the daily entree, the cafeteria is packed with chips, drinks, candy, and ice cream, opening up a new world of limitless snacking potential. While the snack station can provide much needed boosts of energy throughout the day, be wary of its dangers—because you only need your student ID to purchase food, the cafeteria gives the illusion that everything is free. Freshmen, excited by the accessibility and abundance of junk food, will often pound the snacks early on, swinging by for ice cream between classes. But while the wonders of the snack station are tempting, use restraint and take it easy on the chips.

Starting high school is intimidating and disorienting. But once you get past Lakeside’s seemingly foreign unspoken rules and throw yourself into the culture, you will realize that—like the upstairs of the library—it is just a normal place.