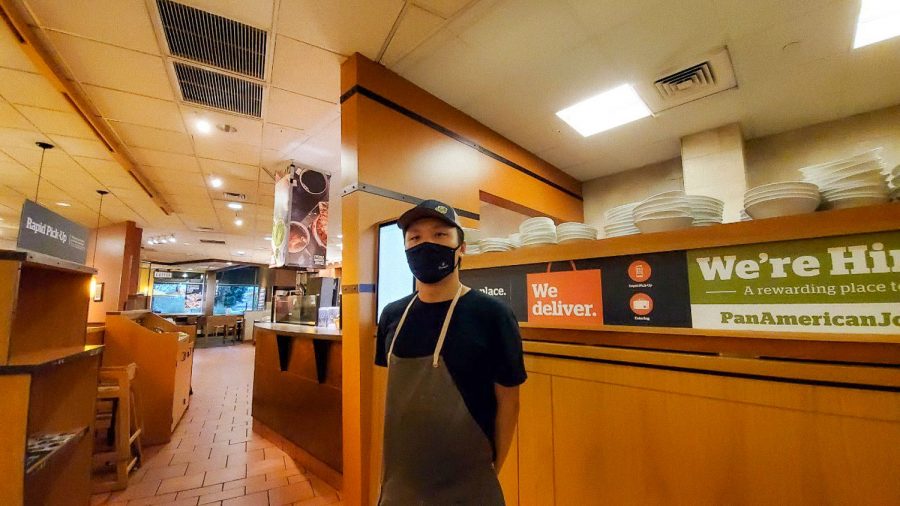 Julian in uniform at his final day on the job.

Everything had gone as planned: I’d applied online, had a decent interview, exchanged phone numbers, and planned to have an answer by the time I got back from my outdoor trip the following week. Yet despite my calls, I received no answer. I understand I didn’t have much of a chance at a location where every worker there has been there for decades, but when you say “I’ll contact you about whether you’ve been accepted or not” on multiple occasions, I at least expect a text, or like, a voice message saying “No.”

The summer job is a hallmark of the highschool summer. One hallmark of high school summer is the summer job, It’s a method of gaining experience in the job market before graduating, a chance to explore an area of interest, and a source of monetary income. And, of course, a nice bullet point on a cover letter or resume. None of which I could receive this past summer, because of the aforementioned ghosting.

Regardless, many Lakesiders commit to such positions, from all sorts of fields of work: retail, food service, and whatever job sector lifeguarding occupies, each with their unique application processes, and their own and sets of highs and lows. As such, hearing from athis wide array of Lakesiders working summer jobs will yield much insight into this high tradition.

A popular summer job is lifeguarding at local pools. With pools reopening and people feeling safer to come out, combined with the heat of wildfire season, the lifeguarding sector seems to be thriving. Andrew C. ‘23 worked for the Lakeridge Swim Club and has lifeguarded for the past two years. Since he swam for them, and coached beforehand, the job came easily. He describes it as “a pretty easy job, it’s not a lot of manual labor. I’m a big part of the community there too.” He also worked in a coaching position, shared among six swim team seniors. Although the coaching position is usually a volunteeringcommunity opportunity for older swimmers to teach younger ones, “this year we just happened to get paid for it,” essentially making sure the kids are “hyped up” and, of course, having fun. He says the worst part of the job was when a kid pooped in the pool and they had to go through the process of disinfecting it, and the best part was getting to know his fellow lifeguards and younger swimmers even more.

Another characteristic occupation is retail, the responsibility of providing customer service and information to prospective customers. With the inferno that is the American etiquette system (or lack thereof), horror stories in Walmarts and Targets seem universal, but Haley Z. ‘22’s time at Abercrombie and Fitch proved decent. She applied to many different jobs, even food jobs like Starbucks and Jamba Juice. In fact, she had and American Eagle interview directly after her Abercrombie interview.  “an Abercrombie interview at three and an American Eagle interview at four. “Abercrombie hired me faster… and I’m glad because American Eagle clothes have gotten so much uglier recently.” She worked as a brand representative, standing on the floor, folding clothes, asking people to buy said clothes, letting them into fitting rooms, and occasionally “work the cash register, which is a big day.…” She also prevents people from shoplifting. While Haley says the coworkers and people there are great, she was disappointed by the wage: “I didn’t know that Bellevue had a lower minimum wage than Seattle, and by the time I figured it out was like the sunk cost fallacy; ‘I’m too far along now to pull out of this job.’” The best part of the job was dressing the mannequins and the worst was when a woman stole three perfumes on her shift.

Ultimately, the foodservicefood service industrysector  is probably the most popular choice among high school students, as is evidenced by Bianca M. ‘22 and Julian C. ‘22. Their respective accounts also speak to the diversity of experiences within a single sector. Bianca M. worked at Ray’s Cafe;, looking for a job due to not getting one the previous year due to COVID. Aafter being referred by a friend, she was “interviewed and pretty much hired on the spot because restaurants are very understaffed right now.” She worked as a busser, cleaning tables and bringing water, but later took an additional position as a host, which involved managing seats and welcoming guests. Overall, her experience was enjoyable— — good coworkers, wonderful view— — with the only downside being that “I … thought I was going to be hired for part-time, and because we are understaffed it is more of a full-time job.” The most…interesting experience was when a man in her section had a stroke, and when she came back from her subsequent time off, the entire building had to be evacuated due to a burst pipe.

Julian C. ‘22 had a much more tenuous relationship with Panera Bread. He worked as a retail team member, running the register, cleaning the dining area and soda machines, refilling coffee, and doing the dishes. He originally applied specifically to work in the food sector, and thought that Panera was perhaps a slightly classier step up from a fast- food joint. Compared to the minimum wage of South Carolina, where he lived prior to moving to Washington, any paying job would automatically be worth the effort by virtue of paying nearly twice as much as a baseline. When asked about his enjoyment of the position, he said “I loved the people … I did hate the job”. Highlights include cleaning dishes, in what amounted to a soapy, moldy soup without gloves, for 4.5 straight hours; having to scrape crystallized soda out of drains with a spoon; catching dust while cleaning out fifteen vents; and having to dump gallons upon gallons of expired milk. Oh, and the time he had to clean out a used tampon container, by (gloved) hand. Plus, large amounts of back pain from lifting heavy objects. He recommends “lifting from the legs”, rather than the back.

Of course, there is the question of what to do with the money. By far the most common response is to save it for the future, putting it into a bank account or for a college tuition. There is the common theme of self-sufficiency, whether it’s being able to pay for a Nintendo Switch on your own money, or paying for your own food or clothes.

And finally, each gave a snippet of advice. Andrew C. says to find a skillset not everybody has. Haley J. advises to ask many questions during the interview, particularly how many hours they expect and what the starting wage is. Bianca M. suggests being open to new experiences and hard work. Julian C. recommends keeping your expectations low, and that the steak and cheese is the best Panera sandwich. And, dripping with sarcasm, that “you should go work at Panera.”